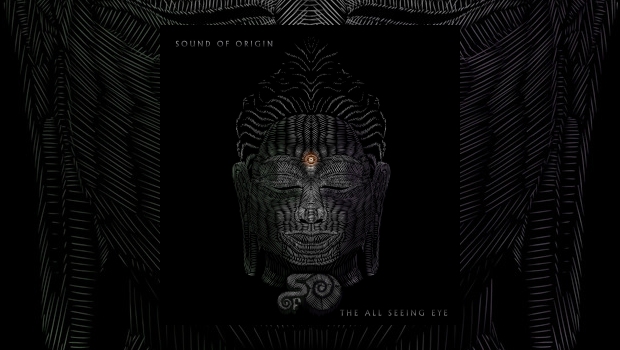 Sound of Origin – The All Seeing Eye

Whenever I review a sludgy, fuzzy and doomy release from a band from the stoner rock scene, I’m aware of the likelihood of some wondering why they deserve coverage on a prog website. But there’s not a genre of music that can’t have progressive music within it, and Sound of Origin released a progressive debut album in 2020 with The All Seeing Eye. It’s not their first offering, and as much as I love their 2017 Seeds of the Past EP, I would never have described that as progressive. But the band have clearly expanded their scope and present us with a far more ambitious and multi-faceted offering. While it retains the stoner-meets-grunge vibe of the 2017 EP, the band play a more dynamic and experimental variant of this. The band appear to be aiming for a more distinct and unique sound, and I think they’re damn close to finding it. There’s a surprising amount of variety in mood and tempo on The All Seeing Eye. It thrashes, it trudges, it grooves and it grinds.

The album begins with the instrumental Not Dead Yet, which may well be a reflection on the travails they have conquered to get to this stage. The contrast between the sparse and minimal passages and those where the volume and intensity is ratcheted up is awesome. It’s not a barnstorming opening number, nor even a statement of intent. It’s simply the heartbeat of a band that is not dead yet. The biggest shot in the arm for the band is finally finding a new vocalist, especially given the quality of Joel Bulsara’s voice. Nothing against original vocalist John Bussey, but Bulsara knocks him out of the park. And as the title track hammers in after Not Dead Yet, he soon gets a chance to show off his pipes. Bulsara has a resonant and melodic voice that at times is reminiscent of Layne Staley, and is just as versatile.

The title track also gives the first indication that the Tool-like album art is also a reflection of the new sound of the band. That’s not to say the band sound particularly like Tool, but a lot of the music is incredibly reminiscent of it for me. The similarities are structural, rather than sonic. If Tool were a doom band, Sound of Contact is probably what they would sound like. Another band I’m reminded of, is Anathema, which I suspect may come as much as a surprise as my Tool comparison to many. But while on the surface, the band may invite comparison with bands like Black Sabbath and Soundgarden, there’s a lot going on beneath the surface, and Anathema is one of those influences that seems to be bubbling through from the subterranean depths.

Lead single, Lockjaw, is next, and it’s a slab of relentless rock, showing Bulsara’s ability to go from croon to a scream (and vice versa) like Maynard Keenan, and again I hear Tool in the music. I think a lot of the Tool vibe comes, for me, in the way Jax Townend’s bass often seems to play a more important part in carrying the song than the guitar, and the way the bass and drums are so prevalent in the mix. That’s not to say there’s not lots of lovely, fuzzy and sludgy guitar, because there sure is – but it doesn’t overwhelm the instrumentation and mix the way it can for many bands from the stoner scene. Dim Carcosa changes the sound up once again, with something sounding like a progressive Alice in Chains, invoking tribal spirits like some psychedelic shaman of doom. This must have some of the harshest vocals on the album, with the sounds rattling out of his throat sounding like what’s left after gargling with razors. The singing style on the following Morning Bird is different again, with passages so deep I’m left wondering whether Bulsara is trying his hand at Mongolian throat singing. It’s wonderfully effective, and one of the things that makes this track one of my favourites on the album.

Not one of the previous songs sound the same in style. It’s not their musical differences that are most striking, but the vocal acrobatics of Bulsara. Honestly, Sound of Origin have really landed on their feet with their new vocalist. But while he has clearly allowed the band to really explore greater scope in their composition, I get the impression much of the material on this album was written prior to Bulsara’s arrival, and somewhat retro-fitted to accommodate him. This is not really a bad thing, and no track ever sounds worse because of it. Rather, it’s the feeling that things are only going to be better on the next album, when presumably Bulsara will be fully involved in the writing process. It seems an odd thing to call a debut album a transitional release, but that’s how The All Seeing Eye comes across for me. Again, that’s not a bad thing as some of my favourite albums are transitional albums. (As I mentioned Anathema earlier, Eternity and Distant Satellites are two transitional albums I love.)

Stoned Messiah Blues is slow, bluesy and oppressive, yet with vocal hooks reminiscent of Alice In Chains (albeit singing some fairly crushing ditties such as Love Hate Love). It’s another number where Sound of Origin are happy to show how much they are willing to play with space and silence, compared to many of their contemporaries. But it’s the one/two punch of the final tracks, Into the Vile and Tempest Dunes, that really blows me away. Talk about saving the best until last. Into the Vile is another explosive stoner-Tool song with a spectacular (and spectacularly catchy) climax. And I guess if I was comparing the band to Tool and to Anathema, and the previous song was the Tool, then I guess Tempest Dunes is Anathema driving Sabbath’s Planet Caravan into a wall of sound. It’s a fine way to exit, even if we might be drowning under waves of sand, rather than surf.

I’m not going to claim anything Sound of Origin is doing is groundbreaking, but they definitely offer something different from the norm, and show a willingness to progress, evolve and experiment with their sound. This isn’t something I’d ever have expected after the enjoyable but fairly standard fare of their 2017 EP. I was interested to hear The All Seeing Eye, just to see what the band had come up with, but I would never have called myself excited. And yet that’s how I feel now, with great anticipation and impatience to hear what the band can do next. The band seem to be moving away from a straightforward stoner aesthetic, and this movement out of a comfort zone has provided some really interesting tension and aggression. Sometimes urgent, sometimes languid, always engaging, always developing. I have a feeling Sound of Origin’s sophomore album is going to be a monster!