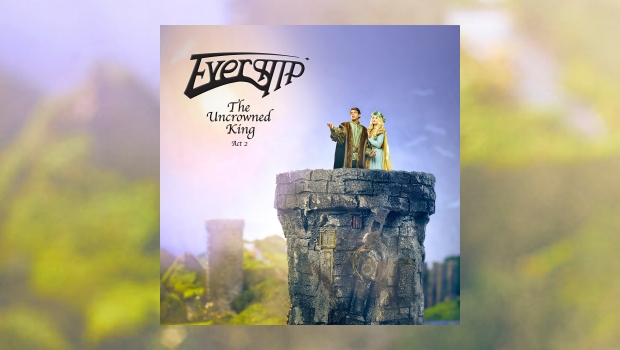 Nashville-based progressive rock band Evership complete their ambitious The Uncrowned King project with a flourish, Act 2 bringing their pomp/prog-rock sound to the concluding half of an allegorical journey in search of truth and enlightenment. Musically and lyrically diverse, it’s an entertaining listen with symphonic prog and melodic instrumentation seamlessly combining with quality vocals, articulate words and a captivating and intriguing story to boot.

I reviewed The Uncrowned King: Act 1 last year and have been eagerly awaiting the release of the concluding part of their epic re-telling of Harold Bell Wright’s 1910 novella of life and truth since. I am pleased to report that The Uncrowned King: Act 2 is another fine slab of classic symphonic progressive rock with echoes of ’70s US pomp rock, but presented within a fresh and modern framework.

Multi-instrumentalist Shane Atkinson and vocalist Beau West – once again ably supported by James Atkinson and John Rose on guitars and Ben Young on bass – have crafted an album that not only matches the quality and diversity of the previous release, but also exceeds it at times. It continues the tale (part The Pilgrim’s Progress, part A Christmas Carol) recounted to a pilgrim seeking spiritual enlightenment in a distant desert land and visited by four ‘voices’.

Act 1 recalled the story of twin princes, ‘Really-Is’ and ‘Seemsto-Be’ from the ‘Land of Allthetime’, who one day see the beautiful, gleaming city of ‘Sometime’ in the ‘Land of Yettocome’ from the high tower and vow to leave their comfortable, easy-going existence in the royal city of ‘Daybyday’ to visit it. They find a land of beauty, love and contentment that they are reluctant to leave, but news of the death of their father, King ‘What-Soever-Youthink’, forces them to end their idyllic stay and return home.

The atmospheric opening, The Voice of the Night, begins with soothing melodic guitar patterns before being joined by flute-like synthesisers, the ethereal vocals of Mike Priebe and a steady build up in richness and intensity. However, it is only the prelude to the galloping rhythm, powerful guitar riffs and resonating keyboards of Missive Pursuits. Beau’s clear and expressive vocals tell of the opportunist flight of the second-born prince ‘Seemsto-Be’ to claim the crown as his own, whilst the true heir, the first-born prince ‘Really-Is’, lingers too long to say his farewells to his friends. Instrumentally complex and vibrant, but held together with a catchy, melodic hook, it showcases Shane’s virtuosity on keyboards and drums well.

The Law of Ages is a more serene, flowing affair with a simple piano motif and gentle harmonies as ‘Really-is’ realises he is too late in pursuit of his brother – who has already claimed the crown for himself. Beau’s melancholic vocals, over the sounds of strings, have an Alan Parsons-like character to them, but then gain more gravitas as the prince learns from ‘Wisdom’ and notes that the Law of All Ages show that his brother will be unworthy of the crown and that he will pity him for that.

The soaring guitar solo is stunning in its execution and poignancy before the gentle sounds of acoustic guitar, violin and choir-like backing vocals recapture the feeling of sadness.

By contrast, Coronation has the dynamic and heavy thrust of Dream Theater-style prog-metal, with keyboards and guitar intertwining and alternating wonderfully as ‘Seemsto-Be’ is crowned and revels in the crowd’s bacchanalian and hedonistic celebrations around him.

By contrast Beau delivers the sad, reproachful and fearful thoughts of ‘Really-is’ from afar:

There is a grandiose and Eastern-tinged feel to the music with strong ensemble interplay, and even echoes of Deep Purple and Rainbow at times.

The Voice of the New Day visits the pilgrim and takes up the final part of the story. The confident and exuberant vocals of Michael Sadler (of Saga) are accompanied by stabs of ELP-style keyboards. Some nice use of Irish low whistles, acoustic guitar, keyboards and chiming percussion creates an uplifting positivity and flow throughout.

Nobody is a lovely acoustic guitar-led power ballad of great charm as ‘Really-Is’ contemplates his quiet life in his little house, far away from his former royal status. Bitter-sweet and moving, there is some pleasing musical interplay as Beau delivers his most impressive vocals of the album. Building up with an orchestral-like grandeur, it is the song that most easily works outside of the album’s narrative, and its melodic and commercial nature is most enjoyable.

“So, I’m
Becoming a Nobody
Is that what you want for me
I think so
I think so…”

Meanwhile, the playful and quirky Fading Away, with its twisting dark electric guitar and accessible piano lines (almost Supertramp at times) is juxtaposed against the dulling of the once gleaming crown and decline of the reign of ‘Seemsto-Be’ – the result of the Secret Magic of the Crown when he was unworthy of claiming it. A meeting with his brother and an offer to share the now diminished crown is rejected and the song takes a darker direction.

“In the late hour
He jumped from the tower
Like the Crown he has
Faded away.”

Uncrowned is a full-on rock opera conclusion to the story, with harmonised vocals, an infectious chorus, bright and effervescent guitar notes and lush keyboards over an insistent drum and bass rhythm. The tainted crown disappears as ‘Really-is’ ascends the throne and all around the people realise the true king needs no crown.

The swirling and celebratory ending slowly fades away and we conclude with Pilgrim’s Reprise, rich piano chords weaving over snippets of earlier themes before guitar and keyboards embrace once more as a prelude to a thoughtful, dreamy, choral and keyboard-led ending. The pilgrim has learnt that “A Crown does not make a King” and he offers himself to ‘That-Never-Can-Change’ – concluding this Christian allegory in an introspective and satisfying way.

Evership’s ambition to tell this captivating tale over two albums of progressive rock is to be praised. The Uncrowned King: Act 2 is an undoubted success and Shane Atkinson and his fellow musicians are to be applauded for their efforts. On its own, it has many moments to savour and enjoy, but it is as a whole, together with Act 1, that it obviously works best. If you enjoyed Act 1, then Act 2 is a must-buy. Treated as a delayed double album, I recommend it to fans of progressive rock who value melody, variety and an intelligent and thoughtful lyrical content, in preference to musical indulgence, showboating and complexity for the sake of it. This is quality prog fayre. 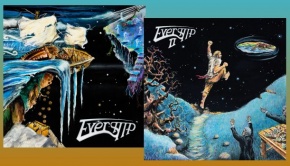