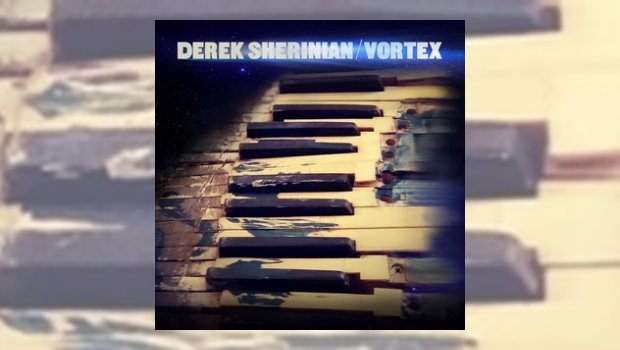 An erupting bubble of synths, an assertive nimble keyboard riff with a touch of funk, some power chords, some more layered keys as we romp away… yes, it’s the latest Derek Sherinian album, Vortex. His style is instantly familiar, as is Simon Phillips drumming, so it’s most certainly business as usual. If you enjoyed his last outing, The Phoenix, this is a continuation in style and content, so you will love this.

In fact, I would suggest that this album is an improvement for several reasons. In the first place, there is more cohesion to this set. That doesn’t mean it isn’t varied, but the pieces all sit together nicely making a satisfying overall shape. Part of the reason is that this time we have a stable rhythm section throughout, with Tony Franklin (perhaps best known for his work with The Firm) on bass joining Simon Phillips on drums and making a formidable unit. Franklin’s playing is unsurprisingly superb, fitting in beautifully no matter the mood of each track. As we move between hard rock, fusion to blues and prog, he provides the perfect accompaniment. Overall, we lean more towards jazz rock than anything else, and his fretless style is allowed free rein, and it’s a joy to hear him play like this.

Another reason this album stands slightly higher than previous work is the standard of the compositions, which are exceptionally strong. Every track is killer rather than filler, with no real dips in quality at all. Finally, the choice of guest guitar players is inspired, each one chosen to best suit the song in mind, and the fact that they all want to contribute says a lot for Sherinian’s reputation. Usually, on albums with various guest guitarists, there are a couple I have to look up as I don’t instantly know them. Not the case here, they’re all household names – well, they are in my house anyway! I mean, Steve Stevens who I’ve always thought of as hugely underrated, and perhaps rather wasted in Billy Idol’s band, is a revelation here, and plays on two songs. First on the title track which opens proceedings, and then on Seven Seas, his playing is first rate, striking a balance between technique and feel. I’ve not heard him play this well since Black Light Syndrome, his collaboration with Terry Bozzio and Tony Levin in 1997. Seven Seas is especially impressive, where he moves from the most tasteful jazz licks to prog explorations and heavy duty riffing with ease.

On Fire Horse, a tasty slice of melodic fusion, it’s Nuno Bettencourt who plays some truly amazing runs as only he can, before Sherinian takes over with some swaggering organ soloing. Scorpion is a piano trio, and the only piece without guitar. The piano playing is stunningly good, and Franklin’s fretless bass simply caresses the ears. Joe Bonamassa and Steve Lukather play their hearts out on the bluesy jazz of Key Lime Blues, which has a melody which sounds like an outtake from Jeff Beck’s Blow By Blow, and hits the spot. Nomad’s Land continues the jazz theme, with Mike Stern (Blood Sweat & Tears, Billy Cobham, etc.) proving his pedigree.

Die Kobra is the heaviest piece, and is almost prog metal in places, written with Michael Schenker in mind, and it’s so good to hear his crystal clear tone on this track. He is ably abetted by Zakk Wylde with some serious riffage, and eastern flavoured keyboards. The rhythm boys slip into metal mode easily and sound totally at home; definitely one of my favourite tracks. This just leaves the closing epic, Aurora Australis, which opens with some wonderfully Keith Emerson inspired piano to set up this extended piece. Even some of the Hammond playing is reminiscent of Tarkus in atmosphere, but this is soon left behind as the tempo picks up, Sherinian dazzling on an array of keys and synths before Bumblefoot makes an appearance on guitar. They play together in Sons of Apollo of course, so know each other well, and this epic track could easily have appeared on one of their albums, although Jeff Scott Soto would have been left twiddling his thumbs! Sherinian and Bumblefoot duel as we head to the finale, and then they disappear in a cloud of bubbling synth.

So there we have it. It’s all been done before, of course it has, but rarely any better than this, and if instrumental prog fusion with a metallic twist sounds like your kind of thing, look no further. This is the real deal. 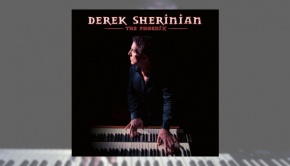