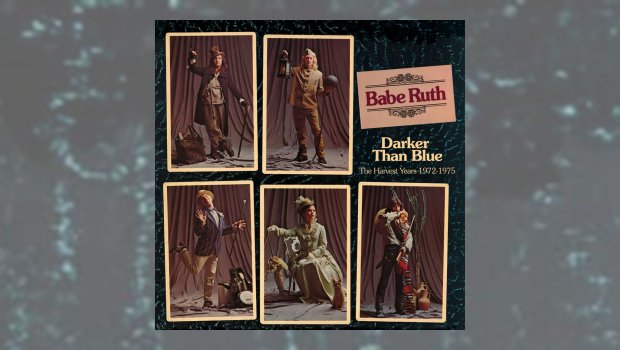 Babe Ruth began life in 1972 as Shacklock, named after Alan Shacklock, the creative driving force behind the band. He was a gifted guitarist, composer and arranger who trained at the Royal Academy no less, and a young talent which was recognised by artist Roger Dean, who went on to encourage Shacklock to persevere, gave him record label contacts and got the band a gig at the Marquee, which resulted in a deal with EMI.

This three disc set reissues expanded editions of the first three Babe Ruth albums which appeared on EMI’s prog imprint, Harvest. It’s an interesting collection of the best material the group recorded, and comes with an excellent booklet, written by Steve Pilkington, filled with anecdotes and song insights from Shacklock and singer Janita ‘Jenny’ Haan. My recollection of the band was that they were unusual in having a female singer, something noteworthy at the time. Coming back to them now some fifty years later, it surprises me how good these albums sound. There is a noticeable American flavour to much of the music, aided by Shacklock’s obsession with spaghetti westerns and the subject matter in the lyrics. Debut album First Base opens with Wells Fargo, in which he relates a story straight out of The Magnificent Seven. It’s a funky rocking workout with heavy sax, nimble guitar playing and a fiery vocal performance from Haan. This general theme continues on The Mexican which includes snippets of Ennio Morricone for good measure, and a cover of Jesse Winchester’s Black Dog might have led people to believe Babe Ruth were an American band. However, their debut was quite diverse, and a highlight is the beautiful ballad The Runaways, which starts gently, and gradually builds, with orchestrated parts for oboe and strings all written and arranged by Shacklock. It’s a stunning piece for a debut record. There is also, in complete contrast, an accurate and respectful cover of Zappa’s King Kong, made all the more impressive when it is revealed in the sleeve notes that it was recorded live in one take. Shacklock shines on guitar, and Dave Punshon plays some terrific electric piano, the pair pushing each other to great heights. Joker rounds off the debut with an impressive composition which Jenny Haan nails with another great performance.

Second album, Amar Caballero is more of the same, although perhaps not quite as strong a selection of songs overall, but still with plenty to recommend it. By now, Ed Spevock had replaced Dick Powell on the drum stool due to ill health, and during the recording, Punshon left and was replaced by the very able Chris Holmes on keys. Lady and Gimmie Some Leg continue the funk element, along with a cover of The Capitols’ Cool Jerk (which Todd Rundgren also covered), whilst the title track continues the Western influence with a lengthy Spanish guitar dominated suite. Angelito guesting on congas gives the piece a Santana atmosphere. Broken Cloud is an intriguing song with a superb vocal arrangement which Haan pulls off brilliantly, her voice panning left to right then centre to great effect. The bonus cut If Heaven’s on Beauty’s Side is a great song, and it’s a bit of a mystery why it didn’t get included in place of one of the weaker cuts, but it’s now restored and is a very worthwhile inclusion.

Third album, titled simply Babe Ruth, is an altogether more straightforward rocky affair, but does have some strong material. Dancer gives Jenny Haan an opportunity to show her range and versatility, and Somebody’s Nobody manages to rhyme ‘guitar’ with ‘Hedy Lamarr’ – genius! There’s another nod to Morricone with a cover of A Fistful of Dollars which romps along engagingly, and this is followed by a slightly risky cover of Curtis Mayfield’s protest song We People Darker Than Blue. They get away with it, largely down to Haan’s sincere and passionate interpretation, and it ends up a triumph. Jack O’Lantern is an energetic rocker about a peeping tom, but it’s followed by a rather pedestrian cover of Booker T’s Private Number. Apparently the record label wanted them to do it to provide a single, but it really doesn’t suit them. Turquoise is a much better song, again highlighting Shacklock’s excellent Spanish guitar skills. Sad But Rich is quite a heavy rocking tune, with great electric guitar flourishes and another theatrical workout for Haan. The album closer is probably the best track, The Duchess of Orleans, and it’s quite a touching break up song. The yearning melody is enhanced by Mellotron, and Janita Haan gives another spirited vocal display.

After these three Harvest albums, Shacklock went on to production work and the band gradually fell apart, but for a while, Babe Ruth proved they were a unique band with a lot to offer. Shacklock’s talent as a writer, arranger and guitarist has largely been overlooked, which is a shame, and Janita Haan advanced the role of women in rock by leading the group from the front onstage at a time when this was still quite rare. This well conceived set contains all the Babe Ruth you really need, and has been thoughtfully put together, as are so many Esoteric re-releases. If you missed them the first time around, it’s worth checking out.