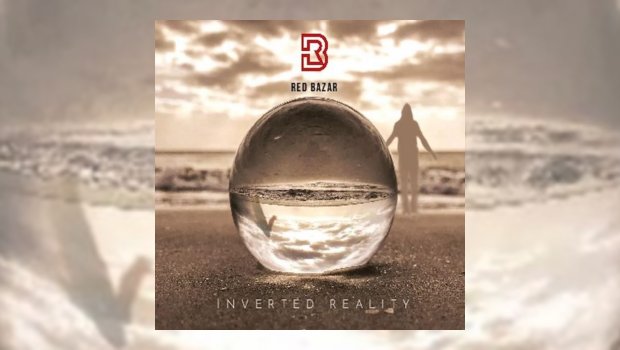 Red Bazar return with Inverted Reality, their first album since 2019 and their third vocal album with Peter Jones of Camel and Tiger Moth Tales. Inverted Reality takes the Red Bazar sound in an even heavier direction than their previous release Things as They Appear, which cast a critical eye on some significant issues, and it goes rather a long way from their more ornate first vocal album Tales from the Bookcase. Inverted Reality continues the more grounded sound and subject matter of the previous album, reflecting some frictions in society, but presents it in a far more emphatic, polished and assured manner – it feels like Red Bazar are really finding their voice in this release. This is modern Progressive Rock with the emphasis very much being upon the ‘ROCK’.

The heavy approach is announced on the remarkable opening song One Out of Three by the prog metal-type guitar histrionics and cascading drums with discordant stabs of synths crashing us into a cynical song about the state of the music industry:

“It’s the way the world is going,
Or at least that’s what they say
So the big boys make a noise,
As they laugh at integrity’s demise.”

Strangely, although it appears a world away from the songs on Tales from the Book Case, Pete Jones has shared that this song was originally written for that album, but was not included. He has recycled the lyrics, but the music has been significantly changed. This could have been a fairly straightforward heavy rock song but Red Bazar mischievously and imaginatively throw in some elements which make this altogether more interesting. Midway through the song they ironically use the hackneyed old pop music trope of a chanted ‘Oooo Oooo…’ refrain, followed by some fine bass work from Mick Wilson and a mock sinister section with distorted vocals from Pete Jones, voicing the big record companies’ manipulation of artists and the public:

“Listen up and drink your cup as we drone into your ear
Don’t think, don’t learn, just tow the new hookline
No need to fret, you’ll soon forget you ever had a mind.”

As a veteran of the first X Factor TV series, Pete Jones clearly has some insights into the pop industry. The song blasts back into heavy riffing and some excellent powerhouse drumming from Paul Comerie, and Pete bellows out the final verse with impressive rock vocalist tones – it’s a fine opening salvo, musically and lyrically.

In a similarly powerful vein is the first song released from the album, State of Disgrace. There is a clear focus on freedom of speech, a favourite subject of Jones, who begins with a sinister spoken word intro about those speaking out being silenced. An eerie and restrained opening suddenly erupts as Jones screams “No, not this time, no more lies, Is this what you want…?” over a driving rock riff with distorted synth and guitar lines. There is a real feeling of anger and frustration in the anguished cries. This song spasmodically ploughs onwards, alternating between sinister spoken pieces, distorted and unsettling keyboard/guitar sections and explosions of hope as the music opens up in fanfares with Jones proclaiming “It’s time for change, Don’t let your pride be erased, Speak now, while you still remember how”. One final fanfare is followed by a strange little spoken coda in which it is explained that 1970s Soviet dissident Vladimir Bukovsky “was subjected to years of psychiatric abuse and imprisonment… well, what did you think we were talking about?” The subtle as a brick inference is clear – that our own society is following similar patterns of oppressing freedom of speech. This is a thought provoking and impactful song presented intelligently with frequent changes and a staccato, unsettling rhythm to reflect the nature of the subject matter.

Freedom of speech and censorship feature in the more extended Take Control, which begins with the sort of melodic progressive rock feel of the excellent Calling Her On and City and the Stars from Tales from the Bookcase. This song is a call for people to stand up for what they believe in, with a restrained but flowing guitar solo from Andy Wilson before Jones screams like some sort of Rock God “NO! Now we’ve gotta take control, Don’t Let Go…” This is the start of a rolling closing rock march with Comerie’s drums detonating all over the place under a serpentine synth solo from Jones – it all sounds rather anthemic, heroic and uplifting, and is without doubt a standout piece on the album.

The album’s final song is Stop the World, further mining the political seam as the lyric describes the frustrations felt in perceiving the insanity of the world and basically wanting to stop it and get off! The lyrics are bleak and cutting as Jones rails and rants against the straightjackets of social conformity and sterile political debate. This is a real rock behemoth with Jones in particular bellowing out his lyrics with bite and power. There is a mellower, more subtle mid-section with tinkling pianos, splashing percussion and rumbling bass before the power returns in a roaring rant and bluesy organ wig-out. This leads to a final powerful wall of rock with scintillating guitar strafing across the finale. I may not always agree with the bleakness of the vision described or hinted upon, but the power and quality of the music is undeniable.

It is not all seriousness and despair, as shown in Spirit of Man, which Pete Jones has explained is about ‘perseverance in the face of hopeless odds, and trying to stand up for what is right’. The basic premise is the old mock Latin phrase ‘illegetimi non carborundum’, as in ‘Don’t let the bastards grind you down’. Andy Wilson lifts this piece up with a beautiful guitar piece in the middle, although for this listener this song was the one which did not fully engage or inspire, and felt rather drawn out… perhaps I just prefer my Red Bazar darker and more sinister!? (😊)

Away from political or social commentary, Red Bazar also indulge in their ability to tell musical stories, especially in the mini-epic and very dark Smokescreen, which Jones has shared was originally inspired by the beginning of a John Francome novel. In Pete’s take on the story, a jilted lover decides to take their own life and the life of their partner by setting fire to the house they are in – Jackanory it ain’t! Red Bazar show their skill in switching effortlessly and smoothly from crunching rock sections into far more subtle passages, and Mick Wilson’s superb bass is particularly expressive and crucial in this piece. There is a thrilling central section in which the whole band barrel along with great power and drive, before settling back into much more of a groove with Jones almost whispering his vocals sinisterly: “… sadness for all that we built, Now watch as it dies, Honesty dies, Everything dies…”. Red Bazar show their versatility and musical chops as they then embark on a fascinating passage in which Andy Wilson solos fluently, followed by a weird keyboard motif, all underpinned by Mick Wilson’s flowing bass and Comerie’s precise and skilful drumming. The piece rises towards a crescendo, along with the volume and feeling in Jones’ voice as he cries, “Now watch the smokescreen rise, everything dies, Now watch the smokescreen rise… Dies, Dies, Die”. This may well be one of the darkest and best songs Red Bazar have ever done, and it has already become a centrepiece of their live shows.

So, do politics and music mix?

This is an oft debated subject and it never ceases to amaze me how often some want to somehow disassociate the politics of a band’s lyrics from its music – to me they are inextricably linked as it is all part of their artistic self-expression. I suspect, for some, reservations about mixing politics and music may be more about the nature of the politics being expressed in the lyrics rather than the issue of politics in music per se (e.g. the usual right-wing palaver around left-wing Roger Waters!). There may not always be agreement on some conclusions or inferences drawn from art, but hopefully we can all agree upon the artists’ right to express themselves on a range of issues – or are they simply just ‘entertainers’, only allowed to play for the pleasure of the crowd and should not express an opinion!? Red Bazar have bravely chosen in a significant portion of this album to particularly focus upon the issues associated with freedom of speech, and the social pressures to conform. This is a very delicate area to delve into and may touch upon some uncomfortable or sensitive issues for us all as it is not always simply a ‘Black and White’ matter. If one of the purposes of art is to get us to think more then Red Bazar have certainly succeeded with this album as it is impossible to listen to it without it stimulating some thought as to how we feel about the fundamental issues of freedom of speech and how that is interpreted or expressed in modern society. We may not all agree on these matters, but that’s the nature of debate, and credit must go to the band for raising the issues in such an eloquent and stimulating manner.

Inverted Reality is an album brimming with musical excellence, framed with power and great skill. It sees Red Bazar really finding their musical and lyrical voice, confidently describing dark stories and exploring important issues with great feeling and imagination in one of the most notable progressive rock albums of 2022.

Red Bazar – Things As They Appear →