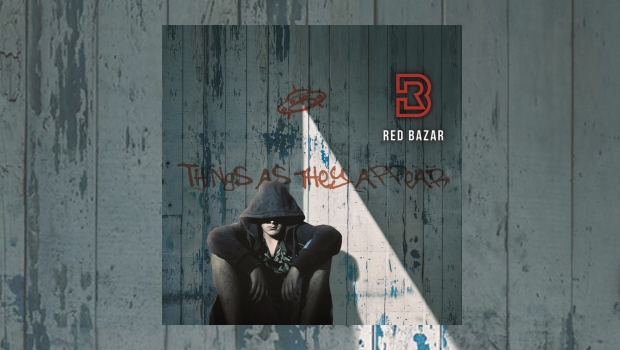 In these unsettled days Red Bazar return with the rather timely album Things as They Appear, which casts a critical observational eye on some contemporary issues. Red Bazar were one of Progressive Rock’s ‘Surprise packages’ in 2016 with their rather more Gothic, and first vocal, album Tales from the Bookcase, largely based on stories by diverse writers such as Arthur Conan Doyle, Alistair Maclean and Arthur C. Clarke. Things as They Appear is a distinct contrast and progression, more direct and grounded in style and content, more reflective of some of the current frictions in society.

Penultimate song on the album The Parting probably most characterises the different ‘feel’ and the most prominent theme on the album. This rock song launches almost immediately into a crunching Andy Wilson guitar riff and a powerful rhythm from Paul Comerie on drums, before Peter Jones’s distinctive vocal laments on the political divisions that are driving families and friends apart, most notably with the current Brexit turmoil in the U.K.:

“Feels like we’ve come to a real fork in the road, the parting of the ways.
Truth? Lies? There’s nothing in your eyes. Fool? Wise? It’s time that I decide.”

We are a long way from intricate songs based on Sherlock Holmes and sci-fi tales (which are entertaining and fine!) – this feels like a far more impactful and, dare I say it, ‘relevant’ album. Vocalist and lyricist Peter Jones is also well known for his more pastoral and whimsical Genesis inflected excursions with his Tiger Moth Tales project (and more recently for joining Prog legends Camel!). Jones is very much an equal member of Red Bazar with Comerie, Marsh and brothers Mick and Andy Wilson, and this collaboration of musical minds is fruitful and fascinating. Red Bazar is an altogether different proposition to Tiger Moth Tales, with a ‘heavier’ rock music DNA and a decidedly darker and more serious ‘feel’ to their albums. This is very clear on Things as They Appear which appears partly borne out of a sense of frustration with the current poor state of public debate, whether from our elected representatives or amongst us all on social media. All too often there is a tendency to accuse someone opposed to one’s point of view of being an extremist of whatever persuasion, rather than engage in reasonable and calm debate. This theme of disenchantment with the current political climate runs like a thread throughout the album, and as we know, ‘threads’ in social media such as Facebook can become all too toxic very quickly. This is most powerfully and poignantly demonstrated on the second song, Nothing Left. This is a deceptive song in that it commences in a fairly restrained, straightforward manner as the anguished lines spell out the tragedy of divisions between loved ones:

“Friends are lost, foes are found, families are torn apart,
Only for a change of heart, will the healing ever start…”

This song gradually builds – it’s not complex or ornate with clever time signatures and multiple sections, and it does not need to be. There is real power in a gradual build in intensity as Jones pleads for some restraint and reason in our discussions:

“If we can’t meet half, let’s just agree to disagree…
I don’t want to lose you please, think of all we used to be,
Let’s not throw it all away for what our so called leaders say…”

Red Bazar are an assured band, confident enough to pull off the feat of adding musical power and heft to the same basic rhythm and melody without feeling the need for fancy deviation. This is a track imbued with regret and frustration and as the volume rises Peter Jones comes in with a writhing synth solo which, probably appropriately, fades away – after all, who knows where this is all going to end? This song promises to be particularly effective live on stage, where Red Bazar really excel.

Things as They Appear begins with the rousing and impressive Temple, premiered to great acclaim at the Winter’s End Festival in April 2018. It grabs the listener straight away with a fanfare of keyboards and electric guitar, driven along lithely by Mick Wilson’s bass playing. The lyrics are focused on fake religious leaders and demagogues and the way they manipulate their congregations and audiences… and there’s plenty of them about these days, aren’t there? Peter Jones has a great voice for characterisation and his spoken interlude as the leader is chilling, followed by an imaginative off kilter guitar solo by Andy Wilson, reflecting the distortion and corruption implicit in the main character. It’s an outstanding song and as an album opener it’s a real killer track. Liar underlines the theme of the album with some finely played keyboards from Gary Marsh, carrying the melody initially before the piece becomes decidedly heavier and darker in the refrain. Andy Wilson elevates the song with a flowing guitar solo in the latter stages, but like so much of this mature album this is done with restraint to serve the song and not as flash self-indulgence.

Rocky Bone Runway is a showcase for Red Bazar’s vocal harmonies over strong and fluid melodic rock. Comerie shows his adaptability, switching from thumping out a heavy rock beat to a more subtle rhythm with great touch. Andy Wilson really takes off with a soaring guitar section as the song drives to a captivating conclusion. Final song We Will Find You provides some dark humour (very dark!) as Jones casts his lyrical spotlight on the over censorious. Wilson screams in with some towering guitar chords before the foreboding rhythm kicks in and the song crawls into sinister action. Mick Wilson’s rumbling bass superbly supports Jones’ whispered, menacing vocals, which have echoes of Peter Gabriel’s classic Intruder. This final piece slouches away with Gary Marsh’s atmospheric keyboards, characteristic of the skilful and understated manner his keys and effects add colour and subtlety to the whole album.

Whilst this is clearly an album which is not afraid to touch on weighty matters it is also leavened with some light and optimism. Future Song starts with a bright chiming guitar motif and lines imbued with more hope from lyricist Jones:

“Now and then I see a light, shining in the dark, a bare hope for tomorrow…
I still see better days, I still have faith.”

Red Bazar show their versatility and musical chops as half way through Future Song shifts gear fluidly, rising in tempo and power. Jones throws in a scintillating, rippling synth solo, which Andy Wilson then takes up on electric guitar. It’s a dramatic rock song with a real punch.

In an album of consistently high quality songs Spiral particularly stands out, musically and lyrically. An acoustic guitar gently leads us into sweeping keyboards and Jones’ beautifully words of melancholic regret about the prisons we sometimes build around ourselves:

“You kept building your defences, you shut me out with pride,
And when I tried to reach, I couldn’t break inside.”

Like so much of this album, this is more subtle than one might realise on first listen as a lovely vocal refrain conceals a darker side, and the music similarly moves from the gentler pastoral opening into gradually more shadowy territory. Gary Marsh excels with a spiralling, sinuous echoing synth solo over Mick Wilson’s subtle flowing bass. The whole band join in, underpinning Marsh’s inspired solo as the song rolls forward ever more menacingly towards an appropriately fading conclusion – how else would a spiral end?

Red Bazar have bravely taken a different direction from their last album – this is no sequel to the fine Tales from the Bookcase. Whilst they touch on important issues of our times, they have very wisely chosen not to take a partisan or obvious political position. Instead they stand outside observing the negativity and deception which has infected modern day politics, communication and public debate. Their music conveys their perspective with skill without feeling the need for overly ornate flourishes. This is an impressive melodic ROCK album for our times, direct and accessible in sound, but filled with subtlety and insight. Red Bazar have already produced one of the albums of 2019.

Tiger Moth Tales – The Whispering Of The World →