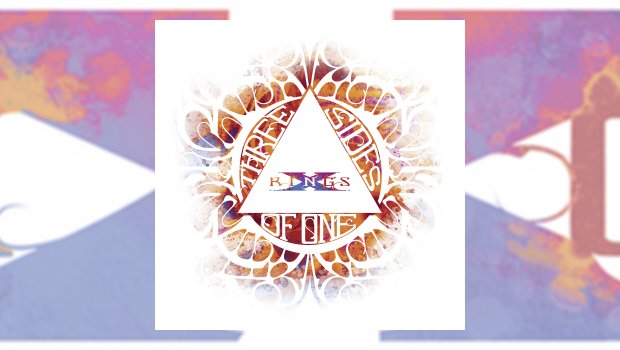 When it was announced that King’s X would be returning with their first studio album in 14 years, along with a trip to play in Europe again, there was much rejoicing at my house.

This is a band that I have enjoyed hugely since their early albums in the 1980s. They’ve always stood apart from the crowd, and probably for that reason have been somewhat marginalised from some who would probably enjoy what they do. There is a uniqueness to their sound, the result of an unbroken trio who bring their own idiosyncratic talents and voices to bear, as underlined in the title of Three Sides of One. The unique blend of lead vocals and harmonies from all three underlines a signature sound, enthusiasm and passion driving the melodic skills and eclecticism that make their greatest music work, and they have enjoyed feverish support among the initiated as a result.

Guitarist Ty Tabor recently called King’s X “a safe place” where he can forget other worries and just play, and that comes through in this collection that has taken over a decade to come to fruition. King’s X have suffered more than their fair share of setbacks over the years – including drummer Jerry Gaskill’s two heart attacks – and sadly this year’s much anticipated shows on this side of the Pond have had to be pulled so that Ty can undergo treatment for an ongoing medical condition. I was so looking forward to seeing them again, but Ty’s wellbeing is far more important, and hopefully there will be another time.

But at least the album is now here!

Over four decades, the trio have developed a shared outlook and way of doing things that continues to hold them together under the King’s X banner. It seems that the sessions this time were particularly positive, Ty noting it as “the most enjoyable album I’ve personally ever recorded.” They can be justifiably proud of what they have achieved, but does this new album measure up to previous heights?

They have always mixed soul, gospel, blues and a sheen of the progressive into their take on hard rock, and that continues here, a Hammond tone and chiming guitar launching into their particular brand of funky energy on opener and first single Let it Rain, Jerry’s resonant drums driving it along. When it arrives, bassist Dug Pinnick’s soulful vocal wraps around the words like syrup, the band taking off into the chorus with insistent crackling guitar, Ty’s esoteric solo dragged up from deep Southern swamps to seal the deal. This is a magnificent statement of intent and all about the trio thriving on the joy of subconsciously playing off each other.

The album’s other rockers include the stone groove of the punchy Give It Up, sure to be a bouncing success live, Dug bellying his 71 years as he shrieks at the top of his range, with lashings of support from his compadres, Ty and Jerry singing more during these sessions to expand the vocal interplay. Dug recently confessed that death has been on his mind of late, and this song is about “not giving up until you naturally die. I want to ride it out until it’s over.” Festival also kicks up a storm before spinning us back into powerful yet melodic hard pop as they consider the pros and cons of setting up an event of their own (a critique on those who do just that?) in an almost stream of consciousness lyric – “What’s the worst [that can happen], maybe somebody dies…”

Another side of the band comes through in the intense yet darkly uplifting Flood (enigmatically subtitled as ‘Part One’), synth strings and screams dropping into a down and dirty riff as the deluge washes away the fears of the world. The harsh edges are smoothed off for the low-key verses, a juxtaposition that highlights the band’s contrasts in this short and sharp cry of despair: “I used to say that all we need is love, now I’m thinking that what we need is a flood”, Beatles and Biblical colliding (as they frequently do with King’s X) in a response to the likes of their classic It’s Love (from 1990’s Faith Hope Love album). The intensity returns later with Swipe Up‘s staccato burst of oblique djenty lines. A rampaging power trio piece, its stop/start rhythmic device coalesces to Pinnick’s bluesy and soulful vocal part, smooth and full to drive the message home. It’s not obvious but you soon get used to it and it shows a band still keen to try new things.

The pace is slowed for the melancholic Nothing But the Truth, the album’s longest track, Dug wringing every ounce of emotion out of the lyric against Beatles-esque harmonies. The sound is open and airy, Tabor’s lyrical guitar line leads to a close-out solo that more than matches the feeling of the words.

Contrasting all this, Tabor’s chiming acoustic opens All God’s Children, slow and measured with a purposeful thump, the plaintive vocal again referencing the Biblical Flood and warning against poisonous and insidious ideas gaining traction. This highlights a very different side to the band, Ty considering it likely to be the album’s most misunderstood song: “I was looking around at all of these people who call themselves Christians, but they believe a whole lot of non-Christian things. They choose to believe anyway despite everything collapsing with all of the death and ugliness around their beliefs.” I think we know to what (and whom) he might be referring… There’s a dream-like quality, with the peripheral suggestion of a nightmare, filled out for the chorus and drenched in slabs of guitar.

The uplifting Take the Time is a hauntingly beautiful follow-up that gives a more positive vibe; light, spacious and melodic, flavoured with mandolin and gorgeously sung by Jerry, as is the strutting Holidays, the chorus sliding into classic pop with another debt to the Beatles, Tabor’s guitar adding an agreeable roughness.

From the pounding drum intro, Jerry also takes the vocal for She Called Me Home, a song he wrote about his illness: “I was thinking of when I was kind of dead and had to recover. I didn’t think I was ever going to play again, but a friend said, ‘You are going to play. You will get out there’. It came from those conversations.” The verses are slightly hesitant, but the haunting chorus makes it a lovely song, and after a playful false ending the band return with a bluesy instrumental around Tabor’s beautifully weighted extended solo.

Tabor sings Watcher, a classic King’s X funky strut, Dug’s bass sliding around a strident and gritty guitar and drum rhythm. Tabor’s soloing is again on point and the band are as tight as you’d expect. Finally, Every Everywhere closes things out satisfyingly in almost choral fashion, Dug stating that he had “tried to write a Beatles-type song everyone could sing along with.”

The fact that these guys are still out there is good enough news, but the fact that they have delivered such a likeable and fulfilling album is the icing on the cake. All of the dozen songs hit home and this is a fine collection of classic King’s X that covers all the bases of the band’s unique abilities, chemistry and genre-hopping inclinations. More people really should like them!

These songs might not all quite reach the stellar heights of some of their finest moments, but it’s a very consistent listen made up of high quality material from a band still firing on more cylinders than most will ever have.