On the eve of another Genesis Revisited UK tour – this time celebrating Foxtrot at Fifty plus Hackett Highlights – fans of Steve Hackett will be delighted with the arrival of another live CD/DVD/Blu-ray release chronicling the highly successful previous tour of the classic and much-loved Genesis live double album, Seconds Out.

Genesis Revisited Live: Seconds Out & More is a stunning audio/visual record of a special concert at the Manchester Apollo on 24th September 2021 – on the same evening his erstwhile colleagues of Genesis were playing just across the city at the AO Manchester Arena on The Last Domino? tour. Steve commented on his feelings that night in my recent interview with him.

Anyone who was fortunate to see this tour, either in the UK or later throughout Europe, the USA and beyond, will have some great memories, and Rosamund Tomlins TPA review of the London Palladium show a few days earlier captures the experience very well.

However, with this album – now the seventh such Genesis Revisited CD/DVD live release by Steve, stretching back to 2013’s Live At Hammersmith – it is completely understandable for fans to question whether they really need another one. Surely, how many live versions of classic Genesis tracks, and even some solo songs, does anyone need? Well, I have no hesitation in unreservedly recommending you get hold of this wonderful live performance. Production values are top-notch and as Steve says himself, with no disrespect to previous band incarnations, the band play with a quality, virtuosity and tightness that creates a truly dynamic show to savour time and time again. Audibly crystal-clear and on DVD, and especially Blu-ray, the visual quality is simply captivating. No need for excessive pyrotechnics when you can marvel at the almost telepathic interaction between the musicians. 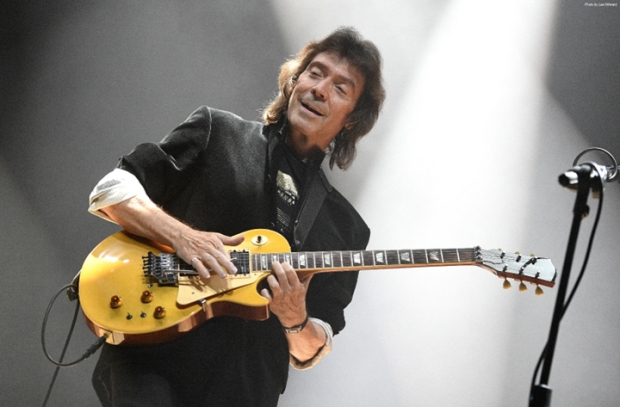 The band walk on to the short, atmospheric sounds of the suitably named Apollo, with its chiming bells an introduction into the dark, brooding Clocks – The Angel of Mons, with Craig Blundell dominant on drums, followed by the more recent Held in the Shadows (a stomping highlight from the recent Surrender of Silence album), where the band, joined by guest guitarist/vocalist Amanda Lehmann, warm up wonderfully – with nice guitar and saxophone interplay between Steve and Rob Townsend.

Every Day provides its usual warm glow to proceedings, with Jonas Reingold on bass giving it great depth, and Steve’s evocative guitar soloing as marvellous as ever as he drives the track through to the end. However, it is the eerie, gothic sounds of The Devil’s Cathedral (also from the latest studio album) that is a very pleasant surprise in this opening section of the show, with Roger King’s church organ and keyboards and Nad Sylvan’s expressive vocals complementing the band’s dynamic ensemble work. Even after all these years, Steve is producing new material which is both progressive and yet melodically accessible.

A full version of the beautiful Shadow of the Hierophant, with Amanda’s angelic vocals over Rob’s flute and Steve’s melodic guitar, holds the audience spellbound before the slow, chiming, creeping and repetitive theme builds in intensity through to a great crescendo, with swirling smoke bringing the solo Hackett part of the show to a satisfying close. I honestly don’t think the track has ever sounded so fresh and vibrant.

Which brings us to the complete live performance of Seconds Out, which takes us through the remainder of CD1 and then the whole of CD2. There is really not too much I can add in this review that hasn’t been said many times about this iconic live release from 1977, but I’ll give it a go. The goosebumps start with the opening notes of Squonk, but then increase with The Carpet Crawlers – with Nad’s lower-register, hybrid vocal style, part Collins, part Gabriel, working extremely well over Steve’s floating guitar. Robbery, Assault and Battery, sees Nad wisely avoid the cockney theatrics of Collins, with Roger’s exuberant keyboards allowed to flow untethered and Craig and Jonas providing a supremely tight, jaunty rhythm to it all. By contrast the emotive, stately Afterglow is simply stunning and the point when the famous vertical columns of lights bathe the stage is truly memorable.

Roger handles the introduction to Firth of Fifth as perfectly as ever, Rob’s melodic saxophone lines keep things fresh and ‘that guitar solo’ from Steve is of course present and correct. No issues with Steve’s guitar being buried down in the mix on this live album, as many think it was on the original Seconds Out. Time too for the usual communal clap-along with the appreciative audience.

I Know What I Like (In Your Wardrobe) remains the most reinterpreted of the repertoire. Faster paced, with almost a funky rhythm, some jazzy saxophone soloing from Rob, and improvised work from the whole band (including Steve). It might not please the Genesis purists, but it remains a breath of fresh air and shows that Steve and the band can honour the legacy of Genesis, but not necessarily be tied rigidly to it. Roger’s twinkling keyboards introduce a powerful, riff-driven version of The Lamb Lies Down on Broadway, with Jonas providing a dominant bass line. As on the original album, we only get the closing section of The Musical Box, but its stirring conclusion with Nad’s pleading vocals still raises the hairs on the back of the neck to this day.

Supper’s Ready has been included by Steve on most Genesis Revisited tours and is played as superbly as ever. All the multi-faceted parts of this prog rock epic remain intact, and the audience are enthralled by the stage lighting and consummate playing, as Steve’s extended closing solo takes us to the ‘New Jerusalem.’ It will not disappoint listeners or viewers. However, no time for everyone to rest on their laurels as Roger’s gorgeous keyboards and Craig’s drumming dominate the majestic Cinema Show, with Nad’s plaintive vocals working well on Aisle of Plenty as the sound of Mellotron fades away. Again, Rob’s saxophones doubling up on Steve’s guitar melodies work so well throughout the show. 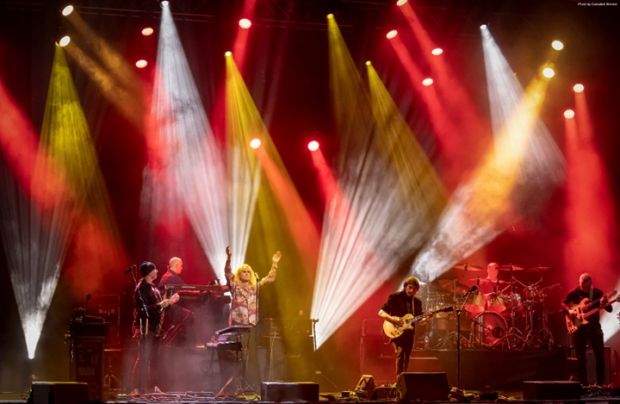 The encore is provided by a muscular Dance on A Volcano, with Craig’s expressive drum solo, often echoing that memorable double-drum instrumentation of the original. Finally, the band dive into the ever-popular Los Endos, with a chunk of Steve’s complex Slogans once again integrated into the track mid-way, prior to the usual stirring finale and Rob’s saxophone once more to the fore.

What a show, both in sound and vision, with the whole production oozing quality and integrity. We can’t go back in time to that classic Genesis era, or even the 1976/77 tours of the Collins-led band, but Steve Hackett and his band give us the next best thing, with a lasting memento of a truly special tour indeed. With additional videos, including a ‘behind the scenes’ documentary on the DVD/Blu-ray, Genesis Revisited Live: Seconds Out & More is a must not only for fans of Steve Hackett or Genesis, but for anyone who appreciates timeless melodic, symphonic and pastoral progressive rock played at its very best by a true prog legend.