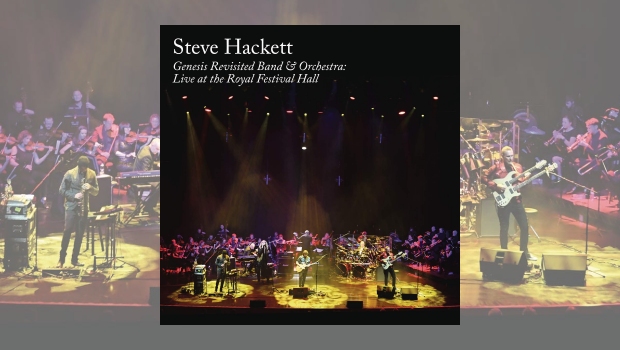 Ask any seasoned Genesis fan about their favourite Genesis era and they invariably speak of those golden years in the ’70s. Inevitably much of the focus, at that time, was on charismatic frontman Peter Gabriel and then Phil Collins, who stepped out from behind his drum kit to launch himself to mega-star status.

Whilst attention is naturally drawn to the Gabriel albums, from Trespass to Lamb, the first two Collins albums, too, were classics and, Trespass aside, another common element running through this period was guitarist Steve Hackett who brought such colour and intricate patterns to the musicality, something sadly missing from the more commercial Genesis albums of later years.

With the likelihood of Genesis ever performing live again close to zero, it remains for Steve Hackett to carry the flame for this treasured musical catalogue to be experienced in a live setting. And now Steve is set to release a 2CD plus Blu-Ray digipak titled Genesis Revisited Band & Orchestra: Live at the Royal Festival Hall, a live souvenir of his extraordinary 2018 tour.

“This is probably the one and only time I’ll ever tour with an orchestra,” Steve Hackett told me ahead of the tour. The decision to undertake the tour was cemented following the critical success of the previous year’s one-off U.S. performance and the chance to fulfil a long-held ambition of Steve’s to perform this music with an orchestra.

“I started to get interested in orchestras when I was a kid,” Steve explained. “I never wanted to go the route of the conservatory and the academy and study piano. Guitar was always a symbol of freedom, so I always came to it instinctively. Pete had something special, (when he departed) I missed him greatly, yet at the same time it gave one more space. I was starting to write more and more, and having more of a hand in the direction of the band.

“But I wanted to take it a stage further. I wanted to have a parallel solo career but that wasn’t on offer at the time. I had a choice to make and I had to see where my own personal development would lead. I was leaving not because I was at odds with the Genesis music, far from it, there was so much really great stuff. I had hoped that the band might one day become an orchestra, instead of getting smaller and smaller. You play yourself into a corner that way.”

Forty years on from his departure, Steve finally realised that ambition with an eight date U.K. tour including The Royal Festival Hall, London, where this masterpiece was recorded on 5th October 2018. The concert featured Steve’s regular touring band of Roger King (keyboards), Gary O’Toole (drums/percussion), Rob Townsend (saxes/flutes) with Nad Sylvan on vocals and Jonas Reingold (The Flower Kings) on bass, together with special guests John Hackett and Amanda Lehmann, and augmented by the 41-piece Heart Of England Orchestra conducted by Bradley Thachuk.

The tracks themselves need little introduction, this is the classic Genesis era but with a rich texture and power that could only come from a live orchestra. The album opens with Hackett’s distinctive notes from Dance On A Volcano, the first track of the post-Gabriel Genesis era, and continues with two from Hackett’s extensive solo catalogue: Out of the Body, a pacey piece augmented by some fine brass from the orchestra and Hitchcock Psycho-like strings before Rob Townsend’s measured sax solo introduces The Steppes. Gary O’Toole’s thumping beat marks the time for a thorough investigation of the power that a live orchestra can produce, yet still leaving space for Hackett’s soaring guitar as the piece marches to a triumphant conclusion.

Time to raid Hackett’s personal favourite Genesis album, Selling England By the Pound. The tone of Nad Sylvan’s voice is not unlike Gabriel’s in many ways and fits perfectly to the classic Genesis pieces. Hackett’s solo on Firth of Fifth is a highlight of one of the best tracks from that album and sounds incredible with the support of the orchestra. The orchestra again adds a richness to Dancing With the Moonlit Knight, a showcase for Hackett’s detailed guitar flurries which were such a feature of Selling England.

The second set begins with the jazzy In That Quiet Earth… with Bradley Thachuk showcasing the full range of the orchestra before the piece leads, naturally, into the sedate Afterglow. The delightful Serpentine Song and the explosive El Niño are also from Hackett’s solo catalogue. The second set concludes with the epic Supper’s Ready from Genesis’ Foxtrot album. Again the orchestra adds rich textures, detail and depth to supplement the band while Sylvan’s vocal delivery is spot on.

The encore piece is The Musical Box, the very first track from Hackett’s Genesis debut album Nursery Cryme, way back in 1971. Hackett’s stunning solo reminds us of just what he brought to Genesis from the very outset.

What a wonderful souvenir of this unique tour for those who were fortunate enough to catch one of the shows, and a compelling listening for everyone who did not.

“I’m really proud to release this,” said Steve. “It was a fantastic experience for both the band and myself to play alongside an orchestra and to feel the power of the sound this extraordinary combo created. It sounds equally compelling on both film and audio.”

The Blu-Ray digipak also includes a behind the scenes documentary plus promotional videos for Under the Eye of the Sun, Beasts In Our Time and Peace. The DVD features the concert in stereo and 5.1 audio only.