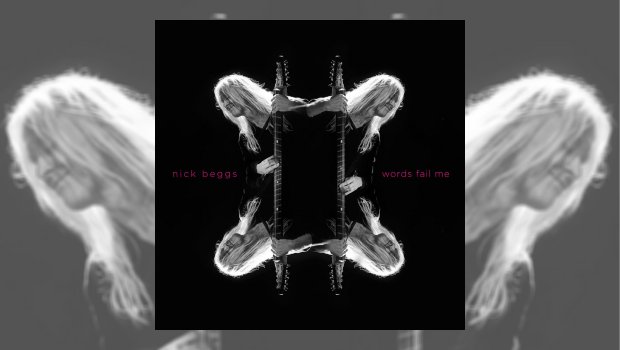 Esoteric Antenna are about to release Nick Beggs’s new solo album, Words Fail Me. It is impossible to review without mentioning his other solo works and the instrument he uses to deliver them. It is for me, anyway. Much-loved and quite possibly (slightly) crazy, Nick Beggs is a terribly good bassist and a long-term practitioner of the Chapman Stick. Perhaps best known in Prog circles as a member of Steve Hackett’s live band, and of course, having played bass and Stick on Steven Wilson’s solo albums and in his touring band since 2011. Mr Beggs is a founding member of Kajagoogoo (who I always suspected of being a closet Progressive Rock band) and The Mute Gods. His CV includes work with Iona and Ellis, Beggs, & Howard. [EDITOR: You don’t really have a copy of his CV, do you?]

The new album’s press release included a PDF with lots of photos and text, some of which relates to The Darkness In Men’s Hearts. This was a re-release of his first album from 2002, Stick Insect, and second solo album The Maverick Helmsman from 2004, supplemented with new material and released by Burning Shed in 2014. It took its name from one of the tracks on Nick’s second release.

Not only is Nick Beggs a virtuoso bassist and Stickist, he is also a proper ambassador for the Chapman Stick. His solo work has featured it extensively. I remember reading that Steven Wilson found that it brought out things in the live performance that improved on the album versions of songs that Nick hadn’t played on. But then, my memory is very unreliable.

Describing his new work, Nick refers to his first album as an exercise in getting to grips with learning technology associated with getting the sounds out of his Stick. The result is a charming and fascinating album, but then, I would say that, being The Progressive Aspect’s unofficial, self-appointed Chapman Stick Correspondent. Words Fail Me is positively riddled with nostalgia-evoking songs. Somewhat overlooked, Nick’s first two solo albums are as good and display a passion perhaps missing from the music of his contemporaries in the pop and prog/progressive rock spheres. You know why? Chapman Stick. That’s why.

Accomplished singer though he is, Nick Beggs went for an instrumental collection of songs with his first album Stick Insect, now included as the third disc in this release. There are some intriguing song titles… notably, The Reggae Man’s Hair Do and Death By Cleavage. Perhaps, on occasion, a little ponderous, the songs are often pretty, sometimes a bit weird, occasionally jaunty, sometimes full of melancholy, dramatic and more laid-back and/or funkier than anything you’d expect to come from an ex-dustman/pop star. What they have in common is that they are always beautifully played. CelticYardies is a cracker. It’s immediately followed by my personal favourite, the track I can well imagine would have been a live performance showstopper, The Last Bitch in Hellville. It’s as if the song comes from the same, ridiculous alternate universe, where the Buggles meet Yes and replace Wakeman and Anderson, forming a new band, also called “Yes” [EDITOR: That actually happened in this universe, Phil].

The Maverick Helmsman, Nick’s second album, is included as disc two of this release. It’s a more restrained affair concentrating less on a “band sound” and more heavily featuring the Chapman Stick. Grab a glass of wine and something to smoke (perhaps a ham or a kipper), if you’re so inclined, and prepare to just chill out to the relaxing tones of ten strings on a plank. After listening to this album your day will be mellow. Nick Beggs will have cast a spell over you. If anyone antagonises you or stirs up a bunch of negative emotions by being complete a jerk, then you won’t even want to burn them with fire until they are dead from it.

Continuing in this mellow vein, Words Fail Me contains covers of songs by composers whom he admires. I think we are of a similar age as I felt a great nostalgia listening to some of the chosen tracks. I feel they were part of my growing up. There are a couple of tracks I have always found quite haunting, such as the theme from Midnight Cowboy. I remember being at home late one night after my parents had gone to bed and I watched Midnight Cowboy. It felt so naughty because it was one of the only X-rated films to get an Oscar. I replayed the end in my head and experienced all manner of emotions relating to the town I grew up in, my late parents, the really sad ending. John Barry nailed that song.

I was especially pleased to see that Nick has included a song by one of my beloved bands, Japan. Night Porter is from 1980’s Gentlemen Take Polaroids where Japan, in my opinion a truly Progressive Rock band, found me at a time when I was a little lost, and a long way from home. Nick’s rendition of Tarantella put me in mind of Chico Marx for some strange reason, as he does that pointy-finger thing. I used to watch the Marx Brothers movies with my Dad and it was comedy genius to me. If you don’t know what I mean the perhaps you’re more a Stooges fan. Some of you may be lost now. I hope so.

There’s even some Bach in there which is, in my opinion, the pinnacle of achievement for any aspiring Stickist.

I spent a day with Words Fail Me on a loop in my office at work. All day long it made me smile. So I think it is fair to say that I found the album very moving.

[Phil also spoke to Nick about Words Fail Me and Chapman Sticks, you can read all about it HERE.]