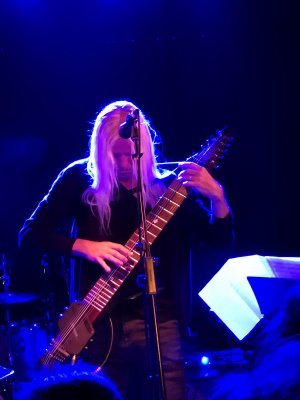 Over fifteen quid for fish’n’chips, with a small pot each of tartare sauce and mushy peas? That’s a typical Camden pub for you. And it came pre-salted! What’s that all about then?

Aside from that, the long natter with mates old and new in said increasingly noisy hostelry meant we turned up at Dingwalls a couple of numbers into Nick Beggs’ solo Chapman Stick set. Boy, the sounds you can get out of that baffling instrument!

One of the numbers was apparently called Pothead, a decent track title if ever there was one! Knowing Mr Beggs, I wouldn’t be surprised if the setlist he gave me was made up on the spot. 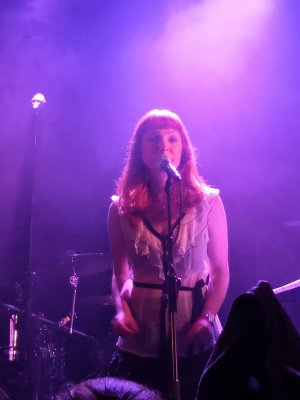 After ample time for a recharging of glasses, former Beatrix Player Amy Birks, accompanied by pianist Alan Baker, took up their positions on the stage and gave us a set of songs that were historically tinged or romantically inclined, and will feature on Amy’s forthcoming solo album.

There are definite hints of Kate Bush in Amy’s songwriting, which I suppose is inevitable for an English female singer with undoubted prog inclinations, but these tunes have an innate charm of their own. Although not particularly my brand of poison, their minimal setting tonight meant that the songs lived or died on their own merits, of which there were ample. 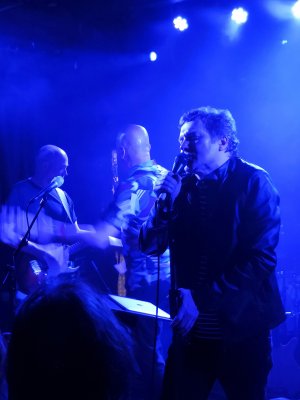 Sporting a striped top and collegiate leather jacket Tim Bowness has the look of the Belgian aesthete, or “Plastic Bertrand Russell” as he would have it, as our host for tonight’s shenanigans joins his bandmates for a low-key opener, the plaintive and yearning Only Rain, from an 18-year-old no-man album. How time flies! “A million ways to stay the same” goes the lyric, but Tim Bowness has evolved from the neglected bar stool crooner in the corner of what he fondly imagined to be a jazz club, but was actually a pub full of taxi drivers, builders, and their partners, into something of a nu-Prog legend, and not before time, say I!

In the past, I have referred to Tim Bowness as the “David Cassidy of Prog”. Not because young ladies throw their underwear at him while screaming undying love and devotion, you understand, but for his breathy and expressive voice, of course. His subtly husky vocals chords perfectly complement his songs, which draw on a deep well of estrangement, regret, and displaced and misplaced emotions, as well as the occasional tragedy. A good example is The Warm-Up Man Forever, a catalogue of missed opportunities set to Michael Bearparks’ chugging and compelling riff, and a favourite of mine. 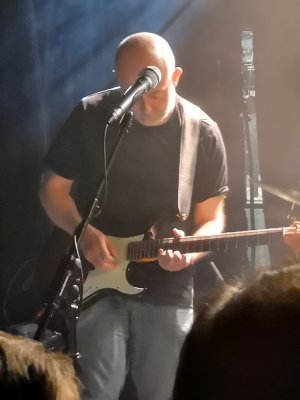 The following song is It’s The World, an angst-filled litany that mentions the new album title in the lyric although it’s not the title track, which sounds confusing. The recorded version featured the suitably declamatory Peter Hammill, and tonight the backing vocal part is taken by Amy, which also sounds a bit confusing given how far apart Hammill’s and Amy’s vocal styles are, but it actually worked quite well. That is, once Amy had realised it was her cue and made her way hurriedly through the audience to the stage, to the smiles of the audience and band, the latter being several bars into a prolonged intro!

Keyboard and guitar player Brian aka Bob aka Bobian (blame Tim for that one) Hulse was making his first appearances on stage with Tim on this tour since 1988, and that was maybe the inspiration behind including two 32-year-old tunes from the Plenty archives entitled Never Needing and A Forest Almost Burning in the encores, that within the modern setting of this fine musical collective slotted in seamlessly. 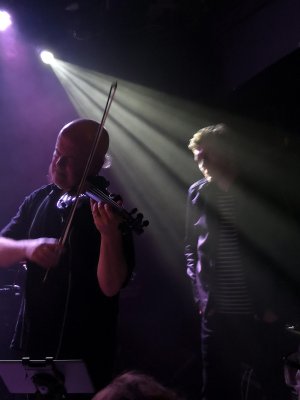 Tim’s core band has been playing together a long time, and their intuitive interplay has long been second nature. Michael’s guitar, alternately stentorian and intimate, swapped riffs and short but sweet solos with Steve Bingham’s luscious violin paying, and the rhythm section swung with the groove and didn’t put a foot wrong all night. Relative newbie, bassist John Jowitt, who of course has a wealth of his own experience on which to draw, sounded like he had been in the band for years.

The turnout was a tad disappointing for a Friday night, the venue was probably only just over half full, but the crowd certainly showed, via their various t-shirts, that Tim is now a fully-fledged Prog artist, although he has never seen himself as such, I’m sure. Much of what Tim produces is beyond any genre pigeonholing, but I guess the increasingly “big” production of his later albums must attract the proghead. Tim tells me the pendulum swings one way and then the other, so I am looking forward to a more minimalist approach making a return, as in my opinon it is the stripped-back accompaniment that provides the best framework for Tim’s emotive writing.

In a live setting the songs are more exposed than on the albums, and Borderline, again with Amy Birks, is especially poignant tonight. The no-man numbers, being spacious creations anyway, even the rifftastic Time Travel In Texas, all fitted the surroundings perfectly.

In terms of exposure, Tim has made big strides in recent years, and although tonight’s attendance was surprisingly underwhelming, Tim and his band, ably supported by Nick Beggs and Amy Birks, provided a highly satisfying evening’s entertainment. Catch him if you can!