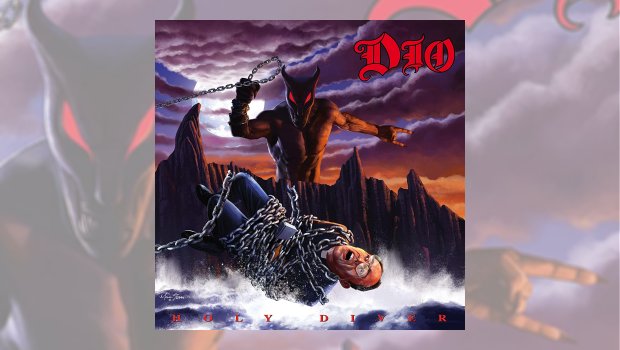 Now then… the observant amongst you might notice that it would be something of a stretch to regard Dio’s 1983 debut album Holy Diver as a thing of progression. Fair enough, but I think I would be right in saying that for many people Ronnie James Dio transcended his chosen genre. For me, as a spotty 17-year-old just starting out on a lifetime of musical discovery, Holy Diver was a very important thing.

Having recently dipped my toe into Deep Purple, it was a natural step to follow up with Ritchie Blackmore’s career after he left that band, and it was the first three Rainbow albums that really caught my attention, particularly Ronnie James Dio’s amazing performances on the Rising and Long Live Rock ‘n’ Roll albums. I was hooked and immediately a huge fan of the little man with the astounding voice. Next I learnt of Ronnie’s sojourn with Black Sabbath and, perhaps perversely, the brace of studio albums and the live set he recorded with the band remain my favourite Black Sabbath albums. Heresy? Probably, but I don’t care because they’re excellent.

With Ronnie and drummer Vinnie Appice having quit Black Sabbath the year before, I was thrilled to read in Kerrang! that they would both be part of a new band that would bear Ronnie’s name, completed by his ex-Rainbow colleague and old-stager Jimmy Bain on bass and young Northern Irish guitar-slinger Vivian Campbell. I was now up to date and anticipating their debut album, the first that I would be in a position to buy upon release.

The resulting Holy Diver did not disappoint, a thrilling blast of energy and songs about rainbows (not really). To cap it all, Dio were to tour the UK later in the year, and their show in Cardiff in November became my first proper gig. I went with some mates (driven by one of their dads who was, ironically, a vicar!) and it was an astonishing experience; I was completely caught up in it all and Ronnie became a God.

Here we are 39 years later and to celebrate what would have been Ronnie’s 80th birthday, Rhino Records have put together a 4-CD remixed and remastered celebration of this platinum selling cornerstone of ’80s metal, which ranks at number 16 in the Rolling Stone list of the greatest metal albums. The centrepiece is the new remix of the album by Joe Barresi (producer and mixer for the likes of Tool, Slipknot, Queens of the Stone Age and Soundgarden) which takes pride of place on the first disc. The second disc features a 2022 remaster of the original album mix, and there’s a previously unreleased 1983 live show plus a selection of outtakes on the others. The Barresi remix is also available as a more succinct 2-LP version on 180g clear vinyl.

It’s lovely for me to immerse myself in Holy Diver again. My tastes have largely moved on in numerous other directions, but this album takes me right back to a very important time when everything I was hearing was new. And that’s the feel you get from Joe Barresi’s excellent remix; working from the original analogue tapes, the album sounds fresh and intoxicatingly visceral. The running time of the original is increased by a couple of minutes to allow the space for it to breathe, with count-ins and natural endings replacing clean starts and fades to put you right in the midst of the recording.

The band sounds particularly powerful as they fly through Dio’s Gothic constructions with ease. The resonance of the remixed version makes it all sound so much better and is an eye-opener right from the start as Stand Up and Shout screams out of the traps. A quintessential metal anthem, the drums and guitar are grittier and right in your face, all the instruments benefitting from increased separation, with the expressive menace of Ronnie’s majestic performance centre stage. When you compare it to the newly remastered version it’s a revelation, pretty much making the original mix obsolete.

The enhanced title track struts majestically while the acoustic intro to Don’t Talk to Strangers shines with purity, the then 20-year-old Campbell masterful, as he is throughout. Invisible becomes a thing of wonder, successfully extended beyond 6-minutes on waves of exuberant and wonderfully histrionic soloing from a man playing well beyond his years. The keyboard hook to Rainbow in the Dark is one of those simple but effective masterstrokes that lifts an already great song (which apparently came together in ten minutes!). The stalking moodiness of Shame on the Night is a more than fitting closer, extended here on a spooky atmospheric drone. Once again (and videos aside), this is a bloody great album.

[Ooof – that’s almost as bad as the other one!]

There’s a real sense of collaboration in this initial line-up of the band; it’s not just Ronnie and some hired hands. Dio’s lyrics are also often of a much higher standard than others plying a similar furrow at the time and the result is a fine album that still ticks all the boxes. The remix just makes it better.

The live show on the third disc is a recording of the quartet playing the Selland Arena in Fresno, California in December 1983, and it’s great for me as it’s a very similar setlist to the one I saw in Cardiff the month before (although I got Stargazer too! 🙂 ). After the keyboards and effects intro, the band hit the ground running with Stand Up and Shout, which is a God’s gift of an opener, moving straight into Straight Through the Heart. Ronnie is in fine voice and the band are as tight as you like after months on the road, with Campbell, as you’d expect, superb. Vinnie Appice gets his chance to shine with a typically driving drum solo during Holy Diver.

With two-thirds of the set unsurprisingly taken up by material from Holy Diver, there’s the always interesting inclusion of tracks from Ronnie’s time with Rainbow and Black Sabbath, with the classics Man on the Silver Mountain (also including a snatch of Starstruck), Children of the Sea and Heaven and Hell always good to hear, Viv covering the Blackmore and Iommi parts with ease, although extending the latter to 20-minutes as a Campbell showcase and an opportunity for Ronnie to lead an audience singalong is a little on the overkill side, given the relatively short set, but the finale is still thunderous. It’s all mixed by Wyn Davis and is a fine record of the band in full flow.

The final disc uncovers some rarities, including Evil Eyes, here as a B-side but later found on The Last in Line album from 1984. I haven’t heard this in decades, and it sounds good in both remastered original and remixed forms. A remix of The Last in Line would be a welcome addition, in the meantime I’ll have to dig out my vinyl…

From Holy Diver there are Barresi remixes of rough and ready studio run-throughs of Don’t Talk to Strangers (with count in and click track), Invisible and Straight Through the Heart (two versions of each, which show the tracks developing) and also Rainbow in the Dark, which in addition to the Barresi mix also features in remastered 7″ mono and stereo edits. These alternate takes give an insight into the recording process and the remixed version of Rainbow in the Dark includes an alternative (and not as good as the finished version) guitar solo.

Ronnie James Dio sadly died in 2010 (is it really that long ago?!), and as a tribute to one of the true legends of metal, and probably its greatest voice, this is a quite lovely release. Revisiting it now for the first time in ages in its washed and brushed up form is something of a revelation and comes highly recommended to both those who were there at the time and newcomers who haven’t heard it before. It’s proper old-school metal done right, still an exciting listen and a fine testament to a man at the top of his game.

LP2: Side Two
Etching of Murray, the Dio mascot