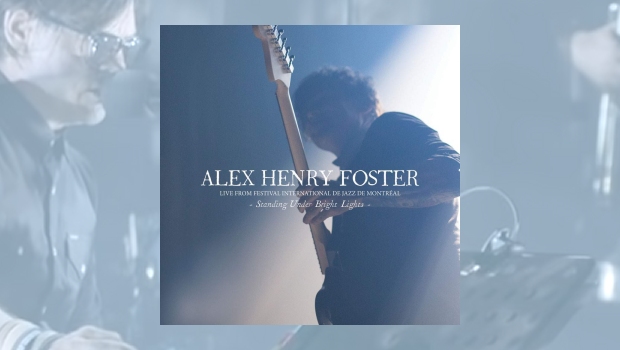 Following the recent release of his remarkable cover of Lou Reed’s classic The Power of the Heart the charismatic French Canadian post rock artist, Alex Henry Foster, returns to the U.K. this June for his ‘Not All Wonder Have Been Lost Tour’ so The Progressive Aspect has taken a look back to his 2021 live album Standing Under Bright Lights. Alex Henry Foster made quite an impact on his tour last autumn, supporting The Pineapple Thief on their European tour. This was what TPA reported as a result of that staggering live experience:

Alex Henry Foster and The Long Shadows put on a truly remarkable set, managing to squeeze in three epic psychedelic songs in a staggeringly mind-blowing 40 minutes. This was a mesmeric show full of apparently free-flowing and at times incendiary music, bubbling with intensity and invention. Alex’s band were tight and intuitive, seemingly telepathically sensing where the song was going next as it seems certain that these are organic performances with no two shows being exactly the same as the music seems to spontaneously morph and twist almost magically.

Halfway through the set Alex announced what turned out to be the final song of the set, The Hunter (By the Seaside Window) from his 2018 album Windows in the Sky, inspired by the tragic loss of his father and its profound effect upon him. The next twenty labyrinthine minutes or so were simply amazing and awe inspiring – I can safely say that this was one of the best performances by a support band I have ever seen… and I have seen a few in my time! The epic rolling psychedelic drama of this piece was performed with such intense drive and improvisational twists it was breath-taking and also quite moving at times. Unexpected moments like this are why I still LOVE going to gigs.

Right out of left field an act I had never heard of blew me away with an amazing show full of passion, fire, unpredictability, imagination and inspirational brio. Alex Henry Foster is clearly a special talent and he is returning to the UK with his band for some headline sets. All I can say is – make bloody sure you get to see them! A full two-hour mind boggling set will probably melt your brains… you can thank me later.

As you can tell, this was a performance which ignited a great interest and passion in this unique artist for this reviewer. Previously lead singer with the successful Canadian alternative rock band Your Favourite Enemies, Alex Henry Foster decided to take a break after the sad passing of his father a few years ago. Intending to be away for three-months to try to resolve how he felt in his grief, he was actually away for two years, in Tangier, Morocco. The result of his two year ’emotional detox’ was the intensely personal 2018 debut solo album Windows in the Sky, all about his feelings after his father’s death. This was a beautiful but impactful album, intuitively describing Alex’s love and sense of loss for his father, with whom he had a complex relationship. The album is filled with a combination of spoken words and sung vocals, seemingly streams of consciousness and spontaneous thoughts and feelings, framed in music that could sometimes be relentless and powerful, or fragile and delicate.  Windows in the Sky was an intensely personal experience for this artist, borne out of depression brought on by grief and his lengthy struggle with anxiety… and Alex Henry Foster never intended to play it live. However, he was eventually persuaded to perform Windows in the Sky live at the Montreal Jazz Festival in 2019, and this album is the resulting recording of that stunning performance. Alex Henry Foster wrote and performed this music partly for his own therapeutic needs. Previously a social worker, he has transformed his view of performing his songs by considering them as a “platform for shining a light on mental illness”.

This review will not laboriously follow a track-by-track analysis or description – the music is too amorphous for such a prosaic approach. Just as I was spellbound in the Bristol O2 Academy when seeing Alex Henry Foster and The Long Shadows blew away me and the unsuspecting crowd with 40 mesmerising minutes, so was I beguiled and hypnotised by the free flowing, dreamlike and interweaving magic of this live album. Alex Henry Foster explained the creative process involved in preparing for that startling show at the Montreal Jazz Festival:

“… it was based on improvisation and conducting the band rather than re-creating the songs as close as possible to the record. The musicians were so generous, they had never played those songs before so they were asking me for sheets and I was telling them, ‘No, forget about that, we’re going to go with the feel’. I wanted to make it so real and so dangerous… I think it’s going to be the purest form of those songs ever played.”

The album sweeps across a range of emotions and atmospheres, whether it is the relentless and intense roll of musical pain seeping from every part of his wounded soul in The Pain that Bonds (The Beginning is the End), under Alex’s emotive monologue, or the gentler, more subtle chiming poetry of Lavender Sky. Shadows of our Evening Tides showcases the wonderful musicianship of his multi-talented band building haunting waves of feeling with a wraith-like violin swooping above this bewildering and yet engaging panorama of sound.  At the centre is always Alex Henry Foster conducting his musical companions with seemingly telepathic control as they instinctively follow his intuition and emotion down every nuanced path. This is no dry note-for-note rendition of exactly what was played on the studio album – this is inspired, inventive, intuitive, organic and imaginative performance.

The staggering pinnacle of this album – and of the live show seen last Autumn – is the epic The Hunter (By the Seaside Window). Emerging darkly with a bass line seemingly drawn from the Stygian depths, this rolling, grinding leviathan of sound and visceral emotion lays waste to your senses and feelings. The versatility and skill of his band is breath-taking. The rhythm section is inspired and hypnotising and the musicians improvise wildly over this wall of sound, with guitars keening weirdly and in the background are the sounds of a woman intoning in a foreign language. Above it all Alex Henry Foster weaves seemingly spontaneous vocals saturated with desperation and deep sadness. Suddenly the whole behemoth kicks it up with even greater power and intensity when you thought it couldn’t go on much longer or be even more intense. It is almost impossible to describe this music – live it left most of us shaking our heads in disbelief thinking “WTF did we actually just see?” (although a few more faint-hearted found it all rather too much!). Hearing this mammoth piece battering my skull and tearing my heart apart again on this album took me right back to that musical maelstrom – just staggering.

One could be forgiven for thinking this all sounds very depressing, but strangely it is the exact opposite. Alex Henry Foster describes his music as a “celebration of life”, going on to explain that performing Windows in the Sky live completely transformed his perception of the art he had created and dispelled his fears about playing something so deeply personal:

“…the integrity of the songs was not only protected, but were growing way beyond the emotions that they were born from. Instead of fearing to lose what was very dear to me – that I was holding so tight that I was basically choking on those emotions – I was releasing it all and just letting it go.”

It is probably just a complete coincidence but rather strangely, as I write this review it is Father’s Day in the UK – my own father passed away in 2014 so understandably feelings are imbued with his memory tonight. It is never easy for anyone to lose a parent, as Alex Henry Foster said himself: “For a son, a father’s death is often the end of innocence, and the illusions that come with it”. He is so right, and I remember saying after my father’s passing for my mother’s subsequent funeral eulogy “We’re all grown up now” – the end of innocence indeed… But life goes on, so on Father’s Day I thank Alex Henry Foster for baring and sharing his soul with us so powerfully and yet so beautifully, and honour the memory of my own Father and all fathers.

If you want to see and hear this unique and charismatic artist, Alex Henry Foster is playing the following UK dates (with shows in Europe to follow in July and August):

Do yourselves a favour – take a risk, just go and experience this artist and band in all their raw glory. 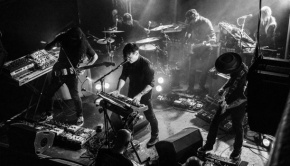