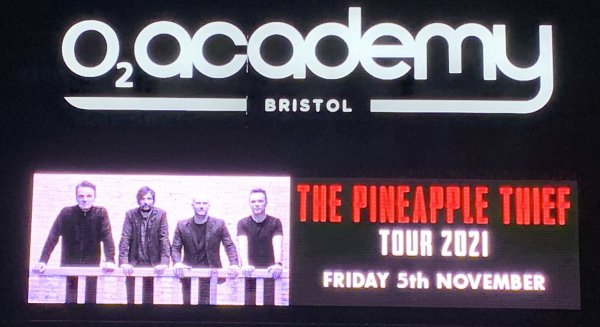 The Pineapple Thief finally brought their long-delayed European tour to a triumphant end on ‘home ground’ in Bristol on Fireworks Night, which suitably ignited the excited fans in the packed venue. But before the main act the Bristol audience experienced a firecracker of a support band from Montreal, Canada… 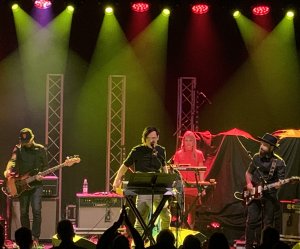 Alex Henry Foster and The Long Shadows put on a truly remarkable set, managing to squeeze in three epic psychedelic songs in a staggering and mind-blowing 40-minutes. This was a mesmeric show full of apparently free-flowing and at times incendiary music, bubbling with intensity and invention. Alex Henry Foster is an engaging front man with eccentric charm and infectious enthusiasm, apparently ‘falling for Bristol’, both emotionally and rather comically nearly having a catastrophic fall in the first part of the gig. Alex’s band were tight and intuitive, seemingly telepathic in sensing where the song was going next, as it appears certain that these are organic performances with no two shows being exactly the same, the music spontaneously morphing and twisting almost magically. They opened powerfully with Ouverture, a special piece created just for the tour, and then followed that with the hypnotic Slow Pace of the Winds. Foster’s band are clearly multi-talented with performers swapping instruments, such as guitarist Ben Lemelin seemingly just as adept on drums and Miss Isabel switching from keyboards to clarinet, amongst others. 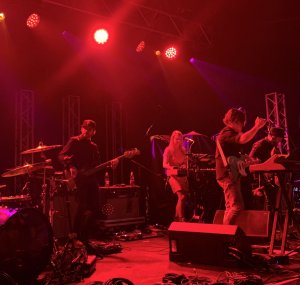 Halfway through the set, Alex announced what turned out to be the final song, The Hunter (By the Seaside Window) from his 2018 album Windows in the Sky, inspired by the tragic loss of his father and its profound effect upon him. The next twenty or so labyrinthine minutes were simply amazing and awe inspiring – I can safely say that this was one of the best performances by a support band I have ever seen… and I have seen a few in my time! The epic rolling psychedelic drama of this piece was performed with such intense drive and improvisational twists it was breath-taking, and also quite moving at times. Unexpected moments like this are why I STILL love going to gigs.

Right out of left field, an act I had never heard of blew me away with an amazing show full of passion, fire, unpredictability, imagination and inspirational brio. Alex Henry Foster is clearly a special talent and he is returning to the UK next summer with his band for some headline sets. All I can say is – make bloody sure you get to see them! A full two-hour mind-boggling set will probably melt your brains. You can thank me later.

Bruce Soord and his Pineapple Thief band mates are clearly in a buoyant mood as they stride on for the finale of their successful European Tour, launching into a crisp rendition of Versions of the Truth, which is a perfect showcase for the deft control and power of drummer Gavin Harrison. This is a band at ease with itself, confident to largely fill their set with the outstanding tracks from their three most recent albums, recorded with Harrison. 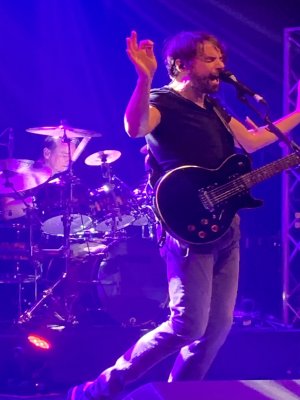 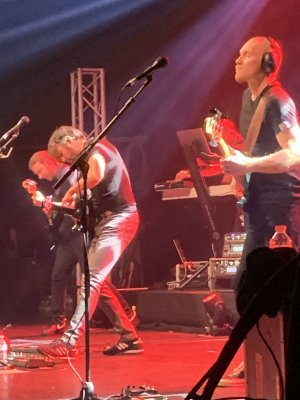 Any fans coming along hoping for forays into the extensive discography of The Pineapple Thief over the last 20+ years may be disappointed. However, in a live setting the songs from Your Wilderness, Dissolution and Versions of the Truth gain even more energy and resonance, and as a live outfit ‘The Thief’ really are going from strength to strength. This Bristol gig feels like a celebration, and after the restrictions of the last 18 months, The Pineapple Thief have a right to celebrate a successful tour, particularly as they are one of the first significant bands to dare conduct an extensive cross-border tour across Europe, with all its varying restrictions. 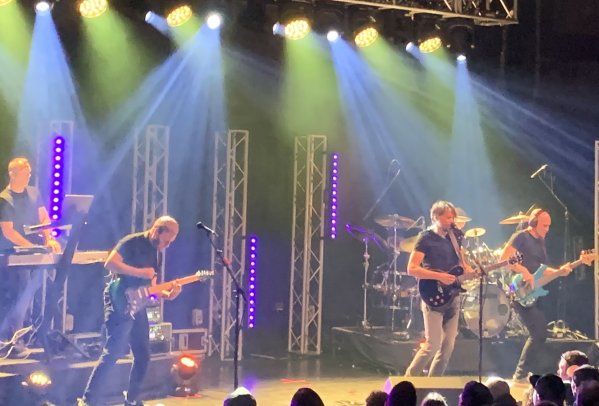 In Exile is the first of the 2016 songs from Your Wilderness, showing Bruce Soord in very good voice as Steve Kitch’s keyboards atmospherically carry the piece along, until we get to a short angular electric guitar motif from guest live guitarist Beren Matthews. This catalyses the band into a powerful, rolling finale to this impressive number. A rare delve into their back catalogue is introduced with Beren Matthews bathed in red light, thrashing out the intro to the pulsating Warm Seas from 2012’s All the Wars. The tempo and sense of excitement is maintained with the fluid menace of Demons and then the band stretch out with the more extended grandeur of Our Mire, both from their most recent album. There is a brief respite as the band bring in the softly floating That Shore from Your Wilderness, bathed in glorious synths from Kitch. What is also remarkable for this delicate piece is the clarity and feeling in Soord’s voice, and alongside him in a truly lovely vocal performance is Jon Sykes, just singing without his bass guitar. 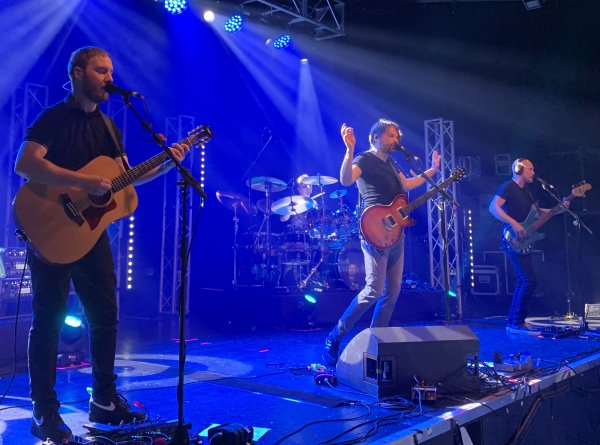 The quality and confidence in the singing from The Pineapple Thief has seen a remarkable development in recent years, and Bruce Soord in particular has become a fine and emotive lead vocalist. Sykes dons his dependable bass again to great effect for the throbbing Dissolution song Threatening War, locking in brilliantly with Gavin Harrison. The remarkable Far Below, from the same album, is a crunching tour de force, featuring a skilful and exhilarating keyboard and drums exchange after which Beren Matthews then sets off some firework electric guitar work. The atmosphere is slowed down by the subtlety of Driving Like Maniacs with some lovely heartfelt vocals in a piece which shows beautiful restraint – sometimes less really is more. In contrast, the lengthier White Mist is rather more complex and ambitious, allowing the band to stretch out, particularly some great shimmering keyboard effects from Kitch. 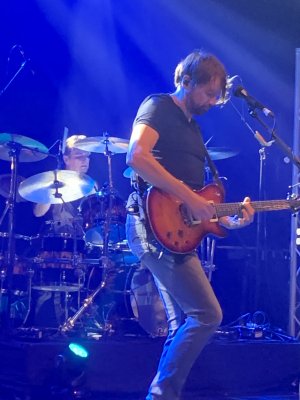 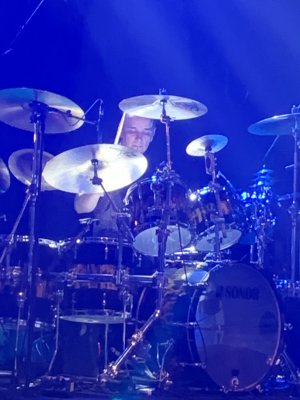 Uncovering Your Tracks, one of the best songs from Dissolution, is introduced by a ‘Giant E’, as Bruce Soord describes it, from Jon Sykes’ bass and features a great eerily distorted guitar. The Pineapple Thief are past masters at embellishing their songs with fascinating brief musical motifs that stand out and enhance the tracks. The power is racking up with the band reaching towards the end of the main set. The heavyweight tank tracks of Break it All rumbles over the auditorium, featuring a dark, pulsating middle section in which weird keys, brilliantly played drums and distorted guitars seem to duel with each other in an eerily desolate musical landscape. Harrison is on particularly sparkling form here, the track standing out as being significantly enhanced in a live setting. The main show is brought to a great climax by a real ‘deep cut’ track, Wretched Soul, which harks right back to the 2005 album 10 Stories Down. Apparently, it was Harrison who suggested they resurrect this piece, after delving into the back catalogue of his relatively new band’s history. He re-arranged it into a spectacular finale which features a growling Soord vocal (“There’s Hell to pay”), and the crowd are in raptures, particularly when Soord lets loose with brief but brilliant scintillating guitar.

The Bristol crowd go bonkers for a band that started in relatively nearby Yeovil in Somerset, and they return for a high-quality encore. If Wretched Soul was harking back then The Pineapple Thief must have employed Dr. Who’s TARDIS to present the ever-green ancient favourite Part Zero from 2003’s Variations on a Dream (my own personal starting point with the band back then… and still my fave!) It is easily their ‘proggiest’ number of the evening (which probably satisfies some of the more ‘mature’ members of the audience who might still feel the need to recover after the experience of the support band!) It always mystified me, even back in the early days, how The Pineapple Thief ever really got lumped in with ‘Prog’ bands… but admittedly the gloriously elaborate and expansively dreamy Part Zero is musically ambitious and progressive in nature… and I still love it all these years later. Thanks TPT – you made an old fan very happy this night, especially when Soord floats in with his distinctive flowing electric guitar solo – and I’m not the only one loving this trip back in time.

The joy is not finished and The Pineapple Thief show just how they have developed into one of the finest post-progressive bands around as they launch into the chilling extended drama of One Final Thing on My Mind from Your Wilderness, echoing and heart-breaking. Sykes and Harrison carry this piece along fluidly as Soord intones mournfully as the tempo and power builds into a thrilling finale, the whole band careering headlong towards the conclusion as an electric guitar arcs over the song… and then suddenly stops before one final drum beat. It’s a brilliant piece, right up there with the best of The Pineapple Thief. They leave us with one last gem from their back catalogue, the spasmodically sinister and powerful Nothing at Best from their second KSCOPE album, 2010’s Someone Here is Missing. This album is regarded by some as their ‘breakthrough album’, as it seemed to give them a much higher profile, and is still the fave for some older fans. It’s a great way to finish the gig and sends the crowd home happy.

The Pineapple Thief cracked open a bottle of bubbly in the encore to thank their crew and to celebrate the tour, and they deserve to feel celebratory after an outstanding show that displayed their great musicianship and high quality post-progressive songs. I may have mentioned it previously ( 😉 ), I am a long-time follower of the band and saw them way ‘back in the day’ in sometimes sparsely populated venues. Therefore, it is especially pleasing to see how far they have come. There was always something rather special about the band, and clearly joining up with ex-Porcupine Tree and current King Crimson drummer Gavin Harrison, since 2016, has certainly helped them to reach higher levels of quality and achieve much deserved greater recognition.

At the end of the day, whatever way you consider or categorise The Pineapple Thief, it is increasingly clear that as a live outfit they have become a highly skilled, polished, confident and entertaining band. In concert their distinctive brand of post-progressive music is enhanced magnificently with added power and resonance…

…and in short, what this gig brilliantly demonstrated is that they are just a bloody great live act – if you can, just go and see them. 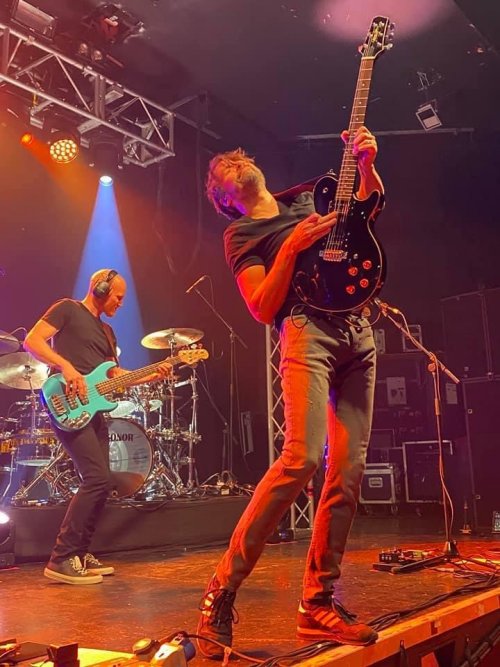 SETLIST
Versions of the Truth
In Exile
Warm Seas
Demons
Our Mire
That Shore
Threatening War
Far Below
Driving Like Maniacs
White Mist
Uncovering Your Tracks
Break it All
Wretched Soul
~ Encore:
Part Zero
The Final Thing on My Mind
Nothing at Best

[Photos by Leo Trimming, except the last one, by Chris Reay, used with his kind permission.]

[The Progressive Aspect would like to thank Simon Glacken of For the Lost PR for his assistance with facilitating this review.]