Continuing the theme of the previous ADA update (#81), we continue to feature five contrasting releases highlighting a ‘broad church’ of musical styles and genres…

• Dirty Shirt – Get Your Dose Now!
• I Built The Sky — The Quiet Place Away
• Jean Pascal Boffo – In Spiral
• Dopapod – Dopapod
• Daniel Crommie & Leslie Gray — Two of A Kind 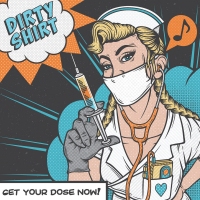 I happened across Romanian ‘crossover folkcore metal band’ (hang-on… you fickle bunch, I haven’t finished yet!), with the release of the Pretty Faces single, feat. Benji Webbe, Caliu & Paul Ilea. And no, prior to this I’d never heard of the band or the ‘feat.’ guests. Pretty Faces is an multi-cultural and eclectic mix of high octane metal riffage, funk, dub, hip hop, rap… mixed in with traditional eastern European acoustic instruments. The end result is a thoroughly entertaining, rather heady, ‘danceable’ concoction – and should you not believe me, then here’s a LINK to check the track out.

Some of this introduction may or may not be accurate, T&Cs apply, do not shoot the reviewer.

So, is Pretty Faces representative of the album as whole? Well, yes and no. By way of contrast there’s a gentle piano/whistle section that bookends Hot For Summer, whilst the two part Cand s-o-mpartit norocu’ is a slowly evolving, heavy ballad, sung in their native tongue. In general though, we are in the realms of the heavy, catchy and melodically sweet. Curiously, Get Your Dose Now! posed a similar quandary to last year’s The Stranger and the Hightide EP from Moron Police, which initially I couldn’t decide if I liked or not, but simply felt compelled to return to again and again. Well the The Stranger and the Hightide ended up as a fave, and Get Your Dose Now! is certainly on its way.

Anyway, I’m sucker for eastern European melodies and their rhythmically interesting meters, which I have to say Dirty Shirt incorporate and perform really well, so those aspects of the music hooked fairly quickly; the other facets of Dirty Shirt’s music took a little longer to click. Anyway here’s a taster… 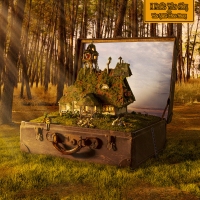 Since 2012, Melbourne based guitarist and composer Rohan ‘Ro Han’ Stevenson has self-released a number of ‘instrumental guitar’ albums under the name I Built The Sky, and earlier this month his latest offering The Quiet Place Away emerged. A new discovery for me…

So, whilst listening to this rather delightful and tuneful acoustic album, some backtracking was required, and it turns out that The Quiet Place Away shows a different aspect (see what I did there?) to this accomplished musician. Reading through his bio page it appears there’s an full electric band version of I Built The Sky and one that looks to the ‘heavier djenty side’ of the musical spectrum. With over two million YouTube views of the impressive Up Into the Ether, the opening track from 2019’s The Zenith Rise, I’m assuming this version of I Built The Sky are more well known. Easy to hear why…

Back to the album in hand and The Quiet Place Away features nine instrumental acoustic tracks which amply display Rohan’s mastery of the guitar, however it is never detrimental to the music, which remains melodically engaging throughout, and with the addition of programmed soundscapes there’s a wonderfully pastoral texture to the music. At times I was minded of Gordon Giltrap and Paul Ward’s excellent The Last of England, along with Mark Vickness’ equally excellent Interconnected, released in 2020.

Like those two artists, Rohan possess a wonderfully fluid and melodically guitar style, one that I suggest could carry the album on its own. However, as mentioned above, he has augmented the guitar with sympathetic programmed soundscapes which add a richness to the tracks. Taking the tunes to another level is the string section, performed by Julia Hill (violin), Kyle Brady (viola), and cellists Kate Derepas and Felicity Mohr, who are quite stunning throughout.

There’s been very little to be thankful for in terms of the recent global pandemic, however there have been a number of great albums to emerge as a consequence of the enforced isolation – The Quiet Place Away is to be added to that list.

Right I’m off to break with the tranquillity and listen to the aforementioned The Zenith Rise. 🤘🏼 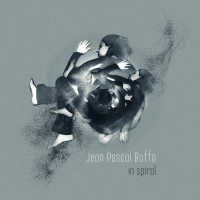 In Spiral is album number fourteen for Lorraine (France) based guitarist, composer and multi-instrumentalist Jean Pascal Boffo, and my first conscious introduction to his music. Nice to know I’ve always got my finger on the pulse. 😉

But – and just in case JPB is a new name to you – a little introduction. He emerged in the mid-’70s, performing in various bands before releasing his first solo album, Jeux De Nains in 1986. Now the second album I’ve heard from Jean Pascal Boffo, it’s one that suggests I need to make up for lost time and investigate his back catalogue. Along with his musical output and since 1990 Jean Pascal has worked as a sound engineer at Studio Amper. Noted here as his recording, mixing and mastering expertise shine through across the album.

In Spiral features ten classy instrumental compositions covering a diversity of styles, in general cocooned in a rich shell of electronica, whether that be driving or ambient – or both. Musically, the album comes across as a rather ‘chilled’ affair, although never bland. So we have Childhood Dreams and Epicycle offering a bluesier slant to the sequenced backing, whilst Connection Breakdown had me mindful of the more laid-back tracks from Jeff Beck’s Joe’s Garage. Given Jean Pascal Boffo resides in France, it triggered thoughts of another intriguing ensemble from the country, Sombre Reptile. Regardless of my impressions, In Spiral is definitely its own beast.

Enhancing and taking the music to another level are the guest musicians: William Bur on drums, accompanied by bassists Claire Chookie Jack and Patricia Alves Peito, who make up a solid and rhythmically diverse backbone. Perhaps not so obvious is the role of keyboardist Séraphin Palmeri within the overall mix, however I would suggest it is significant. The final element is Jean Pascal Boffo himself, weaving in his textural guitar layers – the end result is rather beguiling… I’ll leave you with Cosmic Blossom, which (to these ears) has the flavours of ’80s era King Crimson… 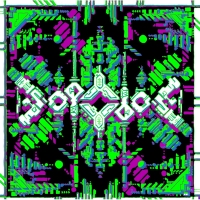 Dopapod are another new discovery in 2022. Hailing from Boston, Massachusetts, the band formed circa 2008 and released their debut in 2009. Since then the quartet of Eli Winderman (keys & vocals), Rob Compa (guitar, vocals), Chuck Jones (bass) and Neal “Fro” Evans (drums) have released six studio, three live albums and ten singles, all of which have eluded me. There seems to be trend developing here… 😉

Although ‘Jam Band’ seems to be the most common term applied to Dopapod, it does fall short of the structured and diverse nature of the music, which to the these ears encompasses an intriguing melange of styles. It’s quirky, but the key word is ‘groove’, after that there’s a tantalising mix of rock (in its many guises, including ‘progressive’), funk, jazz, blues, psychedelia, along with a healthy does of electronica. And it’s not easy to quantize, as many of these diverse elements are incorporated in every track…

Let us highlight the the album opener, starting with a restful and hypnotic intro, before the guys kick in with a heavier drive. The rhythm section of Chuck Jones and Neal Evans are on the money straight off, with Rob Compa adding both grit and texture from the guitar. Completing the musical zest is Eli Winderman’s Hammond organ and Moog synth.

If we now touch base on a couple of other tracks following the opener, Think, then we have the splendid but all too brief Building A Time Machine, which moves from a heavy groove to a twisted instrumental akin to something Queen might have done on A Night at the Opera. From here were sucked onto the ‘dance floor’ by the stomping Black Holes and then there’s the smokin’ bluesy Fannie, rippling piano and silky guitar – great stuff…

If there was a BUT, it would be the vocals, which initially didn’t sit too comfortably with me, however by the second run through of the album I was more at ease with them – the clinchers here were the delightful Ebb and Flow and Made A Design.

A great discovery, and should you wish to discover the album too, it’s available on various streaming platforms including YouTube Music (which is linked below). There’s also an animated video for the whole album HERE. 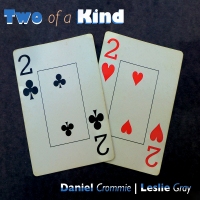 Considering Daniel Crommie has over 70 releases to his name, I’m sure there will be many reading this review who are oblivious as to his musical output. Across his 35-plus year career, Daniel has released numerous solo albums, along with collaborative works (such as we have here) and band efforts with DC Collective, Group Du Jour, Echo System and Saturnalia Trio. There may be more…

My first encounter with the Portland (Oregon) based multi-instrumentalist was some ten years ago now with the release of Daniel Crommie With Glyn Havard & Friends’ Aquarius in Retrograde (2012). Now the name Glyn Havard may have caught the attention of some, and it is of course the same Glyn Havard from Jade Warrior. The album’s ‘Friends’ also included fellow Warrior David Duhig. Similarities to Jade Warrior were certainly evident on Aquarius in Retrograde, and to some extent the same can be said of Two of A Kind. Daniel’s airy flute certainly recalling Jon Field. One final name to mention from Aquarius in Retrograde is Leslie Gray, who performed an engaging viola melody on the track Disbelief, and appears as the other half of this duo.

Leslie plays both violin and viola here, weaving in and out of the mix seamlessly. In contrast, the delightful Templum (A Place for Observation) and An Autumn Vignette see some magical interaction between the strings and flute. The latter, a truly haunting and melancholic piece…

Two of A Kind is an enjoyable, unobtrusive album and should sit well with those who enjoy electronic ambient music. Distinctly unhurried, full of atmospheric and textural soundscapes and topping it off, and in the main, nicely pulsed Vangelis infused bassy synths and percussive timbres.