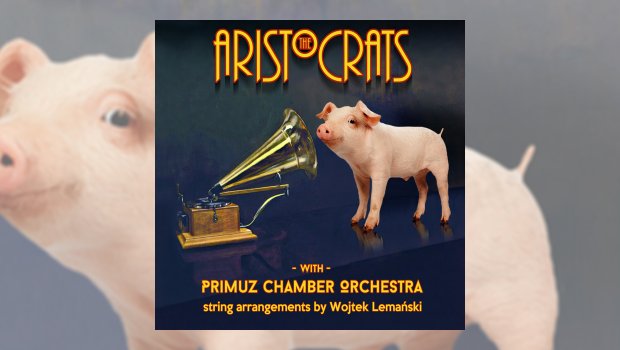 The Aristocrats unfreeze themselves from pandemic mode with their first studio album since 2019, ahead of a US tour. Nothing particularly strange about that, perhaps, but this is an album that appears to have happened almost by accident.

In a statement, the band confirmed that “this project began when we randomly stumbled upon a YouTube video of Poland’s Primuz Chamber Orchestra performing one of our songs, as reimagined by composer/arranger Wojtek Lemański. Their flawless execution of a highly challenging arrangement (which was startlingly inventive and yet remained entirely faithful to the spirit of the original composition!) inspired us to reach out and propose a collaboration.”

The album was put together throughout 2021 comprising nine tracks taken from the band’s three previous studio albums. The Aristocrats debut is overlooked but there’s a triptych from each of the subsequent studio releases, Culture Clash (2013), Tres Caballeros (2015) and You Know What…? (2019). The selected tracks were remixed from the ground up by engineer Forrester Savell and transformed by the orchestra via Lemański’s string arrangements: “This approach enabled Wojtek to create orchestrations which treated many of the spontaneous, improvised elements from our original ‘band in a room’ takes as if they had been part of the actual compositions, yielding some unique results!”

The document before us, then, is an unexpected reimaging of The Aristocrats’ recent history, a lush recreation of past glories that makes for a fine addition to the band’s catalogue.

Dancing strings imbue the opening of Culture Clash with an almost Mahavishnu Orchestra slant, even more so in the slow mid-section, matching pace with the dextrous trio at every turn to flesh out the arrangement with rich additions that detract nothing from the adventurous enthusiasm of the original. This and Stupid 7 stick closely to their sources, the edginess of the latter highlighted by the strings, but The Ballad of Bonnie and Clyde is significantly extended by way of a lovely overture, that sets the scene beautifully, and occasional orchestra only asides, complementing the rest of the piece with a suitably sinister backing.

The orchestra gets its chance to shine throughout, such as the beautifully judged coda for Dance of the Aristocrats which ties the piece up with a highly decorative ribbon, or the pizzicato intro to All Said and Done before the band come in, which adds to the jaunty feel. On the flip, the lengthy Through the Flower doesn’t stray far from the original, the strings adding a new dimension, although possibly in a lower-key way than elsewhere.

Jack’s Back is particularly effective, the strings swirling through the basic structure of the song, adding greatly and taking it to new places, given free reign here and there with solo violin and full string section additions. It’s a beautiful thing and it’s this flexibility within the arrangements that makes the set work as well as it does. Ohhhh Noooo also comes acros with panache, the orchestra playing off the dynamic nature of the song without needing to offer any additional time.

To close, the fittingly poignant Last Orders gets a suitably stirring extended baroque overture that is worth the price of admission on its own, the band subtly picking up the theme for a majestic close to a very enjoyable album.

The string arrangements fit like a glove around the original trio playing, to the point where it would be easy to assume that it was all recorded during the same sessions, which of course it wasn’t. It’s an unexpected and welcome adjunct to the Aristocrat discography, an interesting diversion that polishes up existing material and presents it in a vibrant new setting.

The album remains rooted on the Aristocrats themselves but the impressive additional scoring makes it all shine anew. Live is where these guys rule supreme, and if a show or two could be arranged with the orchestra, I’m sure it would be a blast.