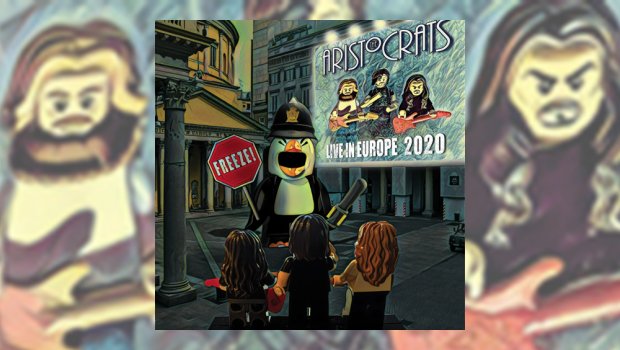 BOING! That’s the sound of my jaw hitting the floor. Actually, it’s more of a clunk. But ‘Boing!’ is appropriate because that’s the name of the record label responsible for this jaw-dropping release. If you hear a more astonishing instrumental album this year I won’t just eat my hat, I will poach my trousers and serve them up for dessert.

If you read my interview with Aristocrats bassist Bryan Beller you will know the band was formed in 2011 by three of the most proficient and in-demand musicians working in the worlds of jazz fusion and prog – Beller from the likes of Joe Satriani and Deathklok, drummer Marco Minnemann from Satriani, Steven Wilson and Steve Hackett, and guitarist Guthrie Govan from Wilson, Asia and Jan Hammer. You will also know that this live album was recorded in Spain just before Covid killed concerts, and the title reflects the sudden premature end to the band’s tour.

Their four studio albums released in the last 10 years show they are masters at creating and performing aggressive, adventurous and intense jazz-rock fusion with apparent ease and precision. But what raises their work to another level entirely are the broad mixture of styles they effortlessly reproduce – from rock, pop and jazz to country and flamenco – and the humour they inject into song titles and performances.

In fact, their name comes from an infamously foul joke, too rude to be repeated here, and was inspired by the fact that many of the instrumentals they composed had off-colour titles, such as See You Next Tuesday and Sweaty Knockers. Of course, funny titles fall flat if the music takes itself too seriously. And, thankfully, The Aristocrats are adept at mixing up musical motifs into something that’s almost heavy metal meets the score to a Tom and Jerry cartoon.

Take second track Spanish Eddie. It’s electric flamenco, played with extravagant chordal flourishes and lightning fast muted runs, with sudden, pin-sharp stops and starts, Govan picking out high-pitched little melodies so far up on the guitar he’s almost playing the strings after they pass over the bridge. As the track builds in menace and speed, the guitarist is at one point performing The Flight of the Bumblebee so fast the average flying insect would burst into flames from air friction, before crashing into a heavy rock riff reminiscent of King Crimson at their most uncompromising, then throwing in sweet major sevenths.

When We All Come Together is the Dixie Dregs at 78rpm, showcasing incredibly-fast guitar picking played with a gloriously cheesy, country twang and Beller’s bouncy bass line dancing on acid all the way through. If you can listen to this without a big grin on your face then I advise you to check your pulse and, if necessary, find the nearest defibrillator.

Opener D Grade Fuck Movie Jam combines crashing wah-wah’d chords with gentle tonks from our favourite prog rock instrument, the cowbell, before Beller’s bass leads the band into a huge, heavy jazz-rock workout played in the sort of time signatures that only turn up in equations at CERN.

The Ballad of Bonnie and Clyde is inspired by the theft of Beller’s basses, when the culprits were arrested right in front of him, and it opens with a suitably moody atmosphere befitting someone who has just had all the tools of his trade pilfered. Then it speeds up almost into dramatic chase music before coming to a tumultuous conclusion.

At the heart of the album is Get It Like That, a complete reworking of a track from the debut album, extended into a 19-minute monster courtesy of a tribute by Marco Minnemann to the Rush drummer Neil Peart, who passed away while the band was on tour. So we get a drum solo that packs in percussive nods to some of the great man’s playing across 45 years and 19 studio albums. I’m not the biggest Rush fan in the world but I definitely spotted the drum intro to Tom Sawyer in the mix. I’m also not the biggest fan of drum solos but, like Peart, Minnemann packs enough variety and dexterity into his performance to keep your attention throughout.

Both Beller and Minnemann are fantastic players who show off their considerable chops on this album. But, at the risk of causing a fight, it’s Guthrie Govan who stands astride it like a colossus. His playing is incredible and the notes pour out of him like the water over Niagara Falls, his guitar screaming, roaring, laughing, cajoling, pleading and weeping.

The man is a six-string phenomenon. It wouldn’t surprise me if it turns out he sold his soul to the Devil in order to do things on the guitar that are simply not humanly possible. Either that or he secretly checked into a discreet private hospital to have a dozen additional fingers grafted on to his left hand. Whatever the reason, let us give thanks to whatever deity you believe in – I’m going with Zappa, god of humour in music – that Mr and Mrs Govan’s genes produced such a remarkable player.

In a year of disappointments and tragedies, let us give thanks to small miracles such as this album from The Aristocrats. Just one tip: listen to it in a room with a carpet so your jaw has something soft to land on when it drops.

[You can read Kevan’s interview with Bryan Beller HERE.] 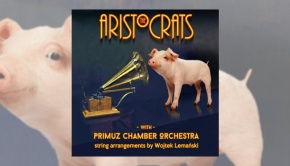