‘Live in 2020’ – three words we won’t be reading very often. For most musicians, 2020 was the year from hell, when Covid killed touring, their most lucrative source of income now that CDs no longer make any money.

A few artists managed to squeeze some dates in before the shutters came down, including instrumental prog rock trio The Aristocrats, who were touring Europe at the time. Indeed, they felt like coronavirus was chasing them across the continent, snapping at their heels.

“The very first COVID lockdowns in the entire western world began in Italy in late February of 2020. We were there exactly when it happened, with our February 24th and 25th shows in Torino and Montebelluna respectively both cancelled”, recalls bassist Bryan Beller.

“February 24th was the very first day of closures in the Piedmont region, and the Lombardy region started closing the very next day. They were the only shows cancelled on our whole tour. We simply left early for Austria.

“Upon our arrival, they announced that the very first confirmed case in Austria had been found in Innsbruck. It was an eerie feeling, like we were just barely outrunning the virus.

“We didn’t get to Asia or South America, but we considered ourselves fortunate that we got so much of the tour in before lockdown began. We know a lot of other bands and artists weren’t as fortunate. Once I got home, I watched in a kind of horror on social media as, one after the other, bands that were still out there in Europe and North or South America posted their cancellation notices and made their way home in harrowing circumstances. It’s all kind of hard to believe.” 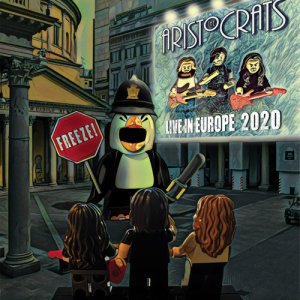 The new album’s cover also references the Covid interruption, showing a penguin dressed as a policeman in an Italian piazza telling the band (depicted as Lego characters) to ‘Freeze!’. Bryan explains: “We once again enlisted graphic artist Tom Colbie, who had done our covers for Culture Clash, Culture Clash Live, and Tres Caballeros, for this album. We thought the Aristo-Lego characters were pretty cool (thank you, Mr AristoBricks in Singapore who made them and sent them to us!), so we showed them to Tom, and told him we liked the idea of calling the album FREEZE! Live In Europe 2020 because it was a double entendre.

“Firstly, every band on tour did have to essentially ‘freeze!’ and go home when Covid hit. Secondly, it was part of a bit in our live show. Anyone who witnessed the You Know What…? tour saw me impersonate the police and yell ‘FREEZE!’ onstage as part of my dramatic retelling of the incredible story around The Ballad of Bonnie and Clyde, which is about how most of my basses were stolen and how three days later I watched the police arrest the culprits right in front of me. So we thought it was a cute title.

“Tom, who is actually Italian, took all of this info and created this absurd but somehow poignant scene, where the band (well, the Lego band… or, dare I say, the surrogate band?!) was trying to get to the venue where they were booked to play that night, as evidenced by the marquee, only to be stopped by the penguin policeman because the city was entering lockdown. Why a penguin? This is deep nerd stuff, but if you know your memes, then perhaps you’re familiar with the ‘no anime penguin’. To go beyond that is probably pointless, but there you have it!”

Bryan credits “the scheduling gods” for The Aristocrats managing to play and record enough shows to release a live document of the band’s You Know What…? tour. Freeze! Live In Europe 2020 contains 60 minutes of astonishing, intricate and powerful instrumental music performed by three of the most talented and in-demand musicians working within prog rock music today.

Apart from Bryan Beller, who has played with Joe Satriani, Steve Vai and Mike Keneally, the line-up includes guitarist Guthrie Govan (Asia, Steven Wilson, Hans Zimmer) and drummer Marco Minneman (The Mute Gods, The Sea Within, Mike Keneally, Randy McStine). Hardly surprising, then, that the result comes roaring out of your speakers like Satan’s steam train.

Most of the tracks are taken from the band’s acclaimed 2019 album, You Know What…? Bryan said: “We really wanted to showcase the material from the album, because we wanted people to get a sense of what we were doing onstage with that material every night, 70-80 shows into a world tour.”

But the live recordings are not just faithful reproductions of the studio tracks. Bryan explained: “Each one of the songs had evolved in noticeable ways – some subtle, some fairly drastic – since the beginning of the tour. With the way we operate as a band, the album versions are really only a template, a starting point, for a song’s potential.

“For example, in D Grade Fuck Movie Jam, the sillier and more bombastic bits are all really exaggerated, but also, it just rocks and grooves harder live. Spanish Eddie has a completely new improvisational intro that changed every night, along with the midpoint solo section silliness.

“When We All Come Together has Guthrie frantically switching tones trying to capture all of the different guitars on the recording in a single live performance. The Ballad of Bonnie and Clyde is kind of a set piece, but there’s the solo section, as well as the increased dynamic drama that’s only achievable on a live stage.

“And Last Orders has a really special extended outro solo, as well as a deeper gravity overall. And there’s a lot more for the careful listener to discover. Hopefully our fans will appreciate all of the little changes that happened along the way.” 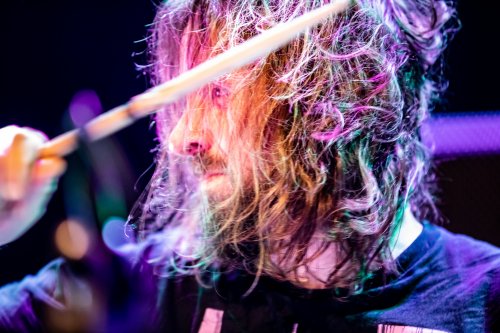 Dominating the live album is the 19-minute Get It Like That, originally from The Aristocrats’ self-titled debut, that includes Minneman’s tribute to the late (and very lamented) Rush drummer Neil Peart. Bryan said: “He passed just one week before the start of our European second leg, and it was a heavy thing.

“Both Marco and I were heavily, deeply impacted by Rush in our early years, like so many musicians our age. How could you not be? Sometimes we would even jam little bits of Rush tunes in soundcheck. So when we started that leg of the tour, he said something at the first show about Neil, and then played some of Neil’s classic stuff in his drum solo. It went over really well, and it just felt right, so it ended up being a constant part of Marco’s solo on that leg of the tour only, which Guthrie and I supported fully.

“Marco also has a relationship with Alex Lifeson because they had already collaborated on some recordings, so he was in touch with him and made sure it was cool, especially in terms of including the tribute on the live album. Alex was great about it – he couldn’t have been nicer or more appreciative.”

It’s been more than a decade since The Aristocrats first played together, with just one rehearsal, in January 2011. Since then, they have released four studio and four live albums of quite incredible instrumental music that not only rocks like the very devil but also sports a contagious sense of humour. Indeed, the band’s name came about because of their penchant for jokey song titles.

Bryan said: “We were exchanging song demos for the very first time. Two of mine were called Sweaty Knockers and See You Next Tuesday. Two of Marco’s were called Boing! I’m In The Back and Blues Fuckers. 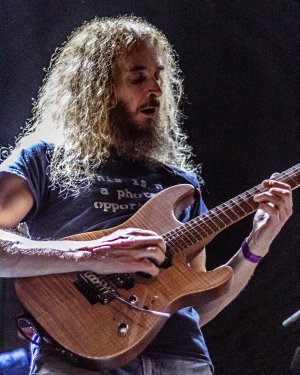 “Guthrie, a considerably more civilised and generally less profane fellow than either Marco or myself, watched the e-mails flying around and simply observed, ‘With song titles like these, perhaps we should call ourselves… The Aristocrats!’ Immediately we were all like ‘YES YES WE MUST IN FACT DO THIS’. Because, of course, we all knew about the joke and what it entailed.

“We’re all fans of Frank Zappa, and specifically how he brought technical complexity and advanced musical concepts to bear without excluding the possibility that you could take the piss out of it at any given moment. We’re not trying to impress anyone with The World’s Most Difficult Music or anything like that.

“If anything, I’d say our writing is getting less ‘technical’ over time, and more melodic. But, sure, we’re throwing in stuff that you might not find in a pop song, and trying to have fun with it. And it’s always a blast to try out a new pastiche and kick it around a bit.”

At the time of writing, things seem to be opening up, at least in some parts of the world, and there are high hopes that live music will return later in 2021. But for Bryan, The Aristocrats may have to wait before completing the tour that was so rudely interrupted.

“Once life gets back to normal, my very first order of business will be honouring my commitment to the artist whose 2020 touring schedule didn’t turn out as fortunately as ours did. Joe Satriani had a complete world tour on the books, starting April 2020. Well, that got completely wiped off the map, every single date. He’s had to reschedule that a couple of times now, but we’re very hopeful that, with the vaccinations rolling out, things will reopen safely in the coming months, and then we’ll do the tour that never happened in 2020 because of COVID.

“While we’re making that right, planning for future Aristocratic musical mayhem will be well under way, and we’ll have more news about that once things firm up around the world. Basically, we all lost a year and a half, and everything got scrambled. But in the end, we’re all thankfully still here, and still healthy, and we’ll get back on the horse as soon as we’re cleared to leave the stable.”

And Bryan has a message for readers of The Progressive Aspect: “Just want to say that we’re grateful to the progressive music community for their support in what we’re up to. I get that The Aristocrats aren’t a ‘pure’ prog band, but we do like to throw the notes around and have fun with them.

“And we’re glad the folks in the greater prog community have seen fit to keep up with what we’re doing in these very strange times. Hopefully we’ll all see each other in a loud venue some time soon.”

[With thanks to Ryan Jenkins at RJPR Music for his help in arranging this interview.]