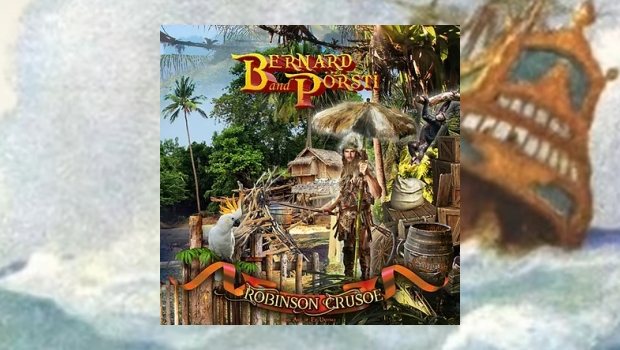 The Samurai of Prog machine keeps rolling along, whether it be as Bernard and Pörsti, as it is here, individually in Mr Pörsti’s case, as The Guildmaster or TSoP themselves, with an impressive eleven studio albums released, so far, in the last two years. Let me further qualify this as when I say albums, I mean albums – these are the real deal, including several concept albums, with an impressive array of guest musicians, released in a high definition gatefold format with lavish artwork (courtesy of Ed Unitsky) and multi-page booklets. So, as I have previously remarked, ‘not just a few tracks uploaded to a free digital platform with some sketchy artwork’.

This latest release from Marco Bernard and Kimmo Pörsti is no exception as they offer an adaptation of Daniel Defoe’s 18th century fictional novel The Life and Strange Surprizing Adventures of Robinson Crusoe Of York, Mariner, more commonly referred to now as Robinson Crusoe. I feel sure all will be familiar with the tale of Robinson Kreutznaer (to give him his official name), so I will offer no further insight on the album’s concept at this point.

Messers Bernard and Pörsti open their musical version with the bold Overture, written by keyboardist Octavio Stampàlia. Befitting the start of such an epic tale, the music is full of orchestrated pomp, thematic symphonic prog, fanfares, light and shade and some nifty soloing. Stampàlia and guitarist Rubén Álvarez are impressive, as is John Hackett who makes his first appearance with his deft and airy flute work. Octavio Stampàlia’s arrangement and strident delivery conjured thoughts of Rick Wakeman’s epic concepts and ELP’s Pirates, mixed with a hint of Carl Orff’s O Fortuna.

A different composer, however, keyboardist Oliviero Lacagnina transitions Overture to Like An Endless Sea seamlessly. The transition is fleeting and the following four minutes of Like An Endless Sea take us through a rapid-fire series of brief solo sections – Hammond organ, electric guitar and violin trade broadsides in an impressive display of old school prog and jazz noodlings. Initially I wasn’t too struck on this instrumental section, but it definitely grew on me after a few listens. Mention here for Marco Bernard and Kimmo Pörsti who do an admirable job holding this tricky section together. Halfway through and we have the first of the vocals – enter John Wilkinson. I came across John on the impressive 2018 The Swan Chorus album, however he will also be known to many as the vocalist with UK based Mama (Genesis tribute band). The mid-section piano ballad shows another side to John, and to these ears he delivers a laudable Jon Anderson rather than the Peter Gabriel or Phil Collins of his ‘day job’. Regardless, it is a lovely interlude which could have gone on much longer for me, however the vocals are short lived and we return to the rather episodic instrumental of earlier.

David Myers’ delightful piano composition The Voyage Begins sees us set sail as we enter the more familiar section of the Robinson Crusoe story. The rippling piano of composer Alessandro De Benedetti accompanied by Steve Bingham’s tasteful and sympathetic violin takes us to the fateful part of the journey. Now onboard a slave ship, the vessel is destroyed in a storm, and Crusoe is washed up on an island some forty miles off the coast on Venezuela and away from any shipping routes. As might be anticipated, The Island of Despair is a melancholic song, although following a foreboding musical intro, the vocals dominate with Bart Schwertmann forcefully telling of Crusoe’s annoyance and misfortune. The music neatly captures Crusoe’s change from an irritable demeanour to that of despair, Steve Hackett’s guitar fitting the mood perfectly.

Friday, split into four parts, musically brings into focus the original story and introduces Crusoe’s companion. Instrumentally and vocally, we are in the mould of early Genesis. Part 1. Cannibals features a driving rhythm, underpinning the Hammondy organ and Marco Vincini’s half-spoken, half-sung lyrics detailing the discovery of unwanted visitors to the island. As we segue into the equally frenetic Part 2. The Rescue, Crusoe sees the opportunity to save one of victims. The ebb and flow of the music captures the danger and the tension of the rescue and the initial connection between Crusoe and Friday in Part 3. The Close Encounter, and ultimately the bond that grew between the two Part 4. Friday and the Memory of the Time.

After 28 years, Robinson Crusoe was finally to be saved from his incarceration, although there was still mutinous intrigue and drama to be found in the rescue. On his return to England, Crusoe learns that as he was presumed dead, he is therefore without funds… although he still has profits from his estates. So along with Friday they depart for Lisbon. How the lyrics portray this part of the tale is unclear to me, as The Rescue is sung here in Italian by Stefano Galifi. His delivery is engaging and sits very comfortably within the proggy-folk rock arrangement, as do the excellent interactions between Adam Diderich’s violin and Luca Scherani’s keyboards.

The album concludes with New Life and initially it would appear that Crusoe’s woes are over, as pianist Andrea Pavoni and John Hackett’s flute suggest a tranquil conclusion. Alas, Defoe had not yet finished with Crusoe. The final twist in the tale is signalled musically by Marcel Singor’s heavier guitar, later followed by the sweetest of solos allowing Crusoe and Friday to fade into the æther…

A rather long review and one I was rather slow off the mark with. Perhaps a combination of a lack of anticipation and/or too much of a good thing? As mentioned in the opening paragraph, eleven releases in two years, and prior to that an equally prolific output left Robinson Crusoe somewhat shipwrecked and abandoned. Once I eventually got around to this latest offering from Bernard, Pörsti and crew, it turned out to be a rewarding voyage of discovery.

So, if old school prog with an Italian flair would be on your desert island disc list, Robison Crusoe is the perfect choice 😉 .

Tags: Bernard and Porsti, The Samurai Of Prog

The Samurai Of Prog – Toki No Kaze →