Ages eleven to sixty has been my personal Genesis, now concluding with this tour and these shows. That’s all I think for live performances, as they go out on a high, and despite the concerns many have expressed on Phil Collins’ abilities, his son Nick’s competence and a variety of other bugbears, the show is almost perfect. The voice is strong with a few adjustments for time and pitch, the backing singers are exactly right, and Nick Collins acquits himself as a talented drummer equal in standing to his father, Darth Philorious (not that there is a Dark Side). The choreographed light show is spectacular, with some great supporting images and glimpses of band members past and present. 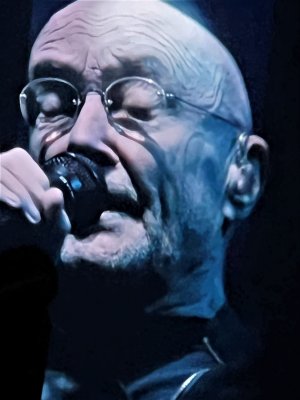 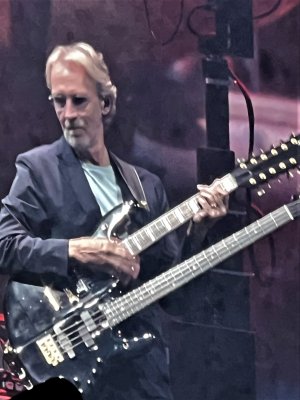 The lights go down, and a supported Phil Collins and company take the stage, to the arena filling cheers of the audience, his seat taken to the opening bars of Duke’s Travels. Phil settles, music plays, and the first vocal is heard. So maybe it isn’t the strength of Knebworth in ’78, but 27-year-old Phil is now 71-year-old Phil. My voice has faded over time, and his is far stronger than mine, so hush now, Slippermen of disdain, and enjoy the show, the show, the show…

Genesis became profitable in the ’80s, after attracting the attention of the ladies with Follow You, Follow Me in 1978. From then on their fortunes spiralled upward, from theatres to stadia, with regular visits to the charts, and chart-topping albums. Most (but not all) ladies asked will cite And Then There Were Three as their entry point. A fine album, and an early indicator of their path of travel. But we open with Behind the Lines and Duke’s End. Bold pieces, and with them the first cracks in my resolve and tears fall. This is It, the last performances, and already I am wrung out.

Over the past few months, with the finality approaching, I have listened. There is nothing quite like Genesis, the influences are scattered around. Listen to early Marillion or Big Big Train and they are identifiable, but no one sounds entirely like the original. Even looking back to their initial peers – King Crimson, Yes, et al – they were no imitators, unique, and tonight with every song, whimsical intro, and stage interpretation you can feel the warmth and love from the audience. It’s an amazing atmosphere to be in.

Turn it On Again, Phil’s age-wearied but strong voice opens the journey. You would need to be particularly heartless to complain, the backing singers providing just the correct amount of support from behind, the audience from the front. The song seems better and stronger to me without the Motown medleys.

Mama; the menace once practiced, is now delivered, with a little bit of role play by Mr Collins, but the intonation is now natural. It remains a powerful piece, seemingly simple – anything but. Bum notes? Perhaps, but I don’t care, these are performances wrapped in a warm emotional blanket; I am comforted.

The Master speaks, railing against the state of the world, and quite rightly stating that Putin is a fucking idiot. The world changes but nothing moves on, Land of Confusion being as poignant now as it was in the ’80s. Nick Collins provides us with a powerful representation, his drums as good as Dad’s, the skill and ability of Mike Rutherford and Tony Banks adding to the understanding of the band’s longevity.

The audience plays, Phil directs, and the atmosphere is created for Home and Second Home by the Sea. Well worth the additional council tax. Just as satisfying as Fountain of Salmacis or Return of The Giant Hogweed, the longer ’80s songs demonstrate the progressive aspect the band has always had. Not always immediately engaged by fans, but a progression, new notes that continue counting out time. I love these twinned tracks, they remind me of how gutsy the band can be when it chooses. 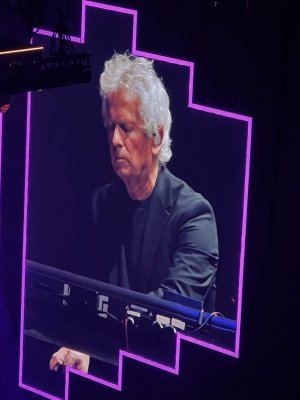 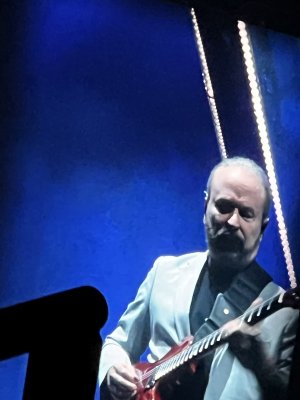 Fading Lights, another reference to time passing, and the end that will soon arrive, the O2 exploiting its captive audience with drinks and food. They could have made a fortune with a tissue concession tonight. This as a latter-day Afterglow, mesmerising in its own special way.

The Cinema Show is a strong favourite of mine, as much that I love the music and imagine a world in which Romeo and Juliet remain together some 45 years later, still annually attending the cinema, arm in arm in floral tie, and a bag of chocolate surprises. From Selling England by the Pound, at times my favourite of the studio albums. The song fades and moves into Afterglow, ending part one of the celebration and sorrow fest.

There is little from Wind & Wuthering, and nothing from A Trick of the Tale; a shame, but even aging rock stars have homes to go to. I would have loved either Ripples or Entangled one more time, though it’s probably just as well as the sobbing may have been uncontrolled.

A break of sorts as the friends shuffle around the stage and gather together to deliver three songs in an acoustic fashion. That’s All is jauntily delivered, we move on to The Lamb Lies Down on Broadway, the bulk by Phil with “On Broadway” from the gathered crowd. For a large audience it feels like a few friends gathered in a Twilight Alehouse for a singalong, such is the intimacy and empathy. Pared dawn, the launch of their journey to mega stardom, Follow You Follow Me, with audience and band singing, the flames once provided by cigarette lighters replaced by a sea of mobile phone torch lights, with the lights from up in the gods a beautiful sight.

Stage redressed, positions taken, and part two begins. Duchess has a nice long intro that adds to the weight of the lyric, the story of a singer reliving her days of success, remembering the exhilaration as the audience cried out for more. Newer Genesis, but still playing to their story-teller strengths; everything changes, but the ethic remains the same.

No Son of Mine brings back the rock elements, mysterious tales dutifully told. The old school says the band were never the same after Peter Gabriel left. Of course not; they were a progressive rock band who progressed – just what else could a poor boy do? The heart and soul of the band remained steady throughout. These are the days, remember.

Every song performed, a step nearer the end. Firth of Fifth (instrumental), I know What I Like – a sing along since 1973 – and into Domino; sublime with the power it gives, a new lantern for old, and just a touch from the magic genie.

The spell is cast and the modern trip begins, three from possibly the period of Genesis’ most commercial success; Throwing It All Away and Tonight, Tonight, Tonight, culminating with Invisible Touch – a marmite tune for some, but I have always felt that it was a song designed specifically for its live potential. No Benny Hill supporting video tonight, and possibly the better for that.

The lights fading, the voices rise, and the expected cries for an encore ring out, and so as it began, it will end.

I Can’t Dance, as close as Genesis get to a Rolling Stones riff, with Banksian embellishments and self-deprecation, but with an open mind it’s a lot of fun. The humour that seems to have existed throughout remains. 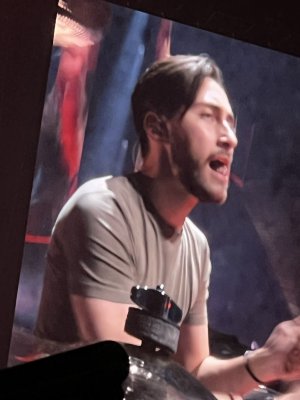 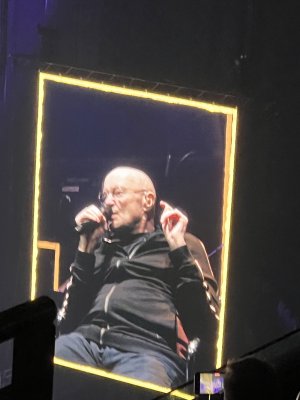 The introduction to Dancing with the Moonlit Knight, “Paper late”, cried a voice from the crowd. Back in 1973 the cry was “Evening Post”, as my first sight of these humans would provide the life blood I needed. A thing of beauty in a field in Reading, so long ago.

The first notes of The Carpet Crawlers: there are wet cheeks, and a dutifully hairless heart, and over fifty years of performances draws to a close. I’m on a high and my heart is broken. No more cries to reunion (though I’m sure they will come), no special guest appearances – sad but unsurprising. No more live.

If that is it, then one more studio would not go amiss. Hoped for but again not expected. A trawl through the archives, and some releases of alternatives versions, unreleased songs, live performances we desire to own (Knebworth 1978 please, my ‘O’ level year). A little sad to have not been in that inner circle post show, but life is, and though absent, good friends.

SELIST
Dead Already (intro, by Thomas Newman from the film American Beauty)
Behind the Lines / Duke’s End
Turn It On Again
Mama
Land of Confusion
Home By the Sea
Second Home By the Sea
Fading Lights (first two verses)
The Cinema Show
Afterglow
Acoustic Set:
– That’s All
– The Lamb Lies Down On Broadway
– Follow You Follow Me
Band Introductions
Duchess
No Son of Mine
Firth of Fifth (Instrumental)
I Know What I Like (In Your Wardrobe) (including fragment of Stagnation)
Domino
Throwing It All Away
Tonight, Tonight, Tonight (two verses)
Invisible Touch
~ Encore:
I Can’t Dance
Dancing with the Moonlit Knight (intro & first verse)
The Carpet Crawlers