Francis Dunnery’s It Bites mini UK tour, following on from the past three years, was delightful as expected – an evening of quality poppy prog songs with jolly japes and much jovial conviviality.

Always taking place in January, the gigs are a terrifically uplifting way to start the year; the last two years’ gigs have been entire album re-creation/interpretations: Eat Me in St. Louis in 2018 (It Bites’ third album) and Big Lad in the Windmill in 2019 (their first). This time we were treated to the entirety of the proggier second album, Once Around the World, complete with B-sides from related singles, and a few surprises.

These beloved songs clearly haven’t dated at all; a significant proportion of the audience cheerily and somewhat beerily singing along to the benign bemusement of Mr. Dunnery beaming down at us from on stage, searching out familiar fans and friends. Kiss Like Judas, Yellow Christian, Old Man and the Angel, and Rose Marie all tie for audience enhancement, but then in sneaks the big hit Calling all the Heroes from Big Lad… and Underneath Your Pillow from Eat Me in St. Louis, both of which induce enthusiasm to trounce that already displayed, and the chap next to me to bellow the lyrics out so hard that I fear for his lungs…and my ears! 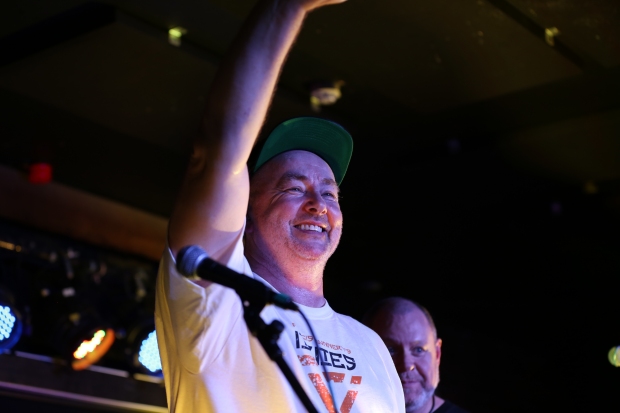 Francis is still evidently a talented and able guitarist and backed with a fabulous band of musicians, celebrated in their own right, on whom Francis bestows genuine admiration, the on-stage camaraderie is in evidence, particularly during the mock ‘seance’ gag. Luke Machin on second guitar proves, as always, a worthy foil, invoking Francis’ mock (genuine?) envy; Paul Brown on bass, and Björn Fryklund on drums solidly drive it all through, and special mention for Peter Jones on keyboards who gets his own solo spot in the middle with his own lovely song Feels Alright. 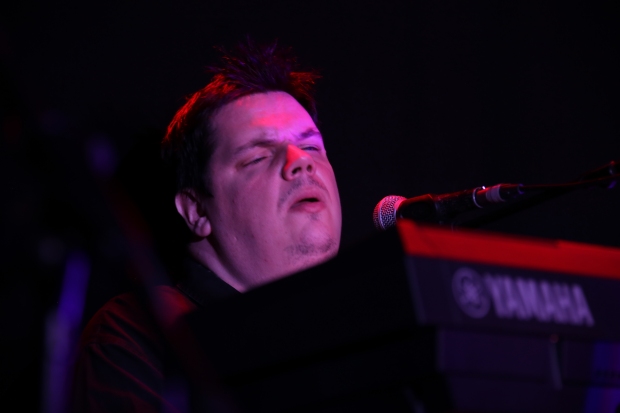 Francis certainly revels in his gift of the gab and the rest of the album’s songs ensue, interspersed with enlightening snippets regarding their inspiration, including a touching tribute to Francis’ brother, Barry, with Just a Man – the only song of the night from a solo album, The Gulley Flats Boys. We were also regaled with inspirational political pronouncements showing how clearly Mr. D is in positive mode these days, and reminiscences from It Bites days, notably regarding the time when in chemical mode he and drummer Bob Dalton experienced the very presence of the Virgin Mary; and other random witty and sometimes outrageous banter – mostly received with gusto by my fellow audience members however those of a more biological/scatological nature raised a few eyebrows! 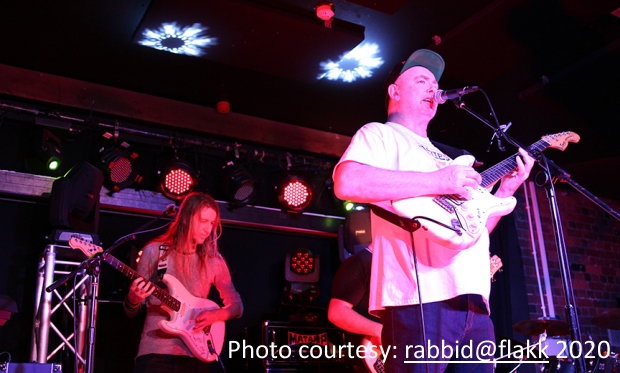 The bonkersness varies as Francis encounters the usual gorilla, and red frocked fox character – homage to Peter Gabriel’s Genesis stage antics – as assistants offering towels and refreshments. Revealed later to be donned by members of the production team. The current inhabitant of the red frock, with all due respect for being a good sport, can’t compete with the previous incumbent, Clayton Hopkins of Clayton-Ellis – previous support and backing vocals – for authentic recreation.

A succession of guests are invited up on stage to add to Quint Starkey, previously seen as support, on backing vocals, as a credit/thank you to them for their roles in putting the gigs on; particularly fun to see Plane Groovy’s boss Chris Topham take to the stage to sing next to Francis’ sister Faye, and girlfriend Liz. 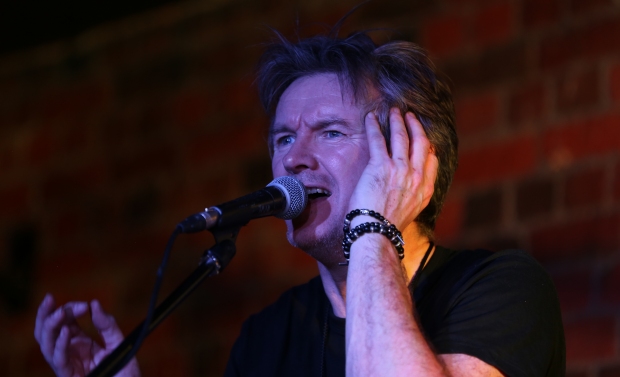 Towards the end, as usual, a guitar-heavy cover appears, it seems to be changing every night; tonight we got Frank Zappa’s beautiful Black Napkins. Too soon it’s encore time and at last the title track and masterpiece, Once Around the World enthrals us all, swiftly followed by the arm-swaying audience-uniting Still too Young to Remember. Truly joyous!

Rosamund has captured the essence of a great night out filled with superb musicianship and brimming with wit and entertainment, so I’ll keep it brief (for me!). The Wolverhampton crowd were similarly boisterous and Dunnery and his band fed off that energy, clearly just enjoying the moment. Francis Dunnery is clearly a very proficient guitarist but as a ‘newbie’ to his gigs I was not expecting him to be quite as amusing and irreverent – the crowd was either rapt with his music or laughing at his wry observations on his life – the story about ‘never meeting your heroes’ was hilarious but unrepeatable in polite company!

Highlights included the rippling guitars in an extended Old Man and the Angel and the flowing keyboards of Peter Jones in Underneath Your Pillow. Peter Jones (of Camel, Red Bazar and his own Tiger Moth Tales) added to the frivolity with his own solo song The Merry Vicar. The only solo song from Francis Dunnery’s solo career performed was the touching Just a Man, with a very appropriate theme in these times. The whole band stood to provide a cappella backing – it was a real personal highlight for me. The excellent cover song was a seemingly spontaneous short version of Jethro Tull’s Thick as a Brick, showing Dunnery’s great versatility on acoustic guitar.

Dunnery’s guitar was rather more ‘smoking’ on a blistering version of Rose Marie which morphed into a fine blues solo. Midnight featured an electric guitar and drum ‘duel’ between Luke Machin (of The Tangent) and Björn Fryklund, showing off their skills in a very talented band. Pete Jones added a great keyboard solo before the band launched into the inevitable and joyous Calling all the Heroes with the crowd singing like a massed choir. We were treated to a wonderful epic version of the peculiar and idiosyncratic Once Around the World in all its glory. Still too Young to Remember brings proceedings to a close with the crowd and band almost as one in celebration – a special night.

I brought my son to this gig – he has been to quite a few of my sort of gigs over the years… and even enjoyed some of them (!!). Afterwards, he told me that this was definitely the most enjoyable ‘Prog’ gig to which I had taken him – well done Francis and the band – it takes a lot to impress him! 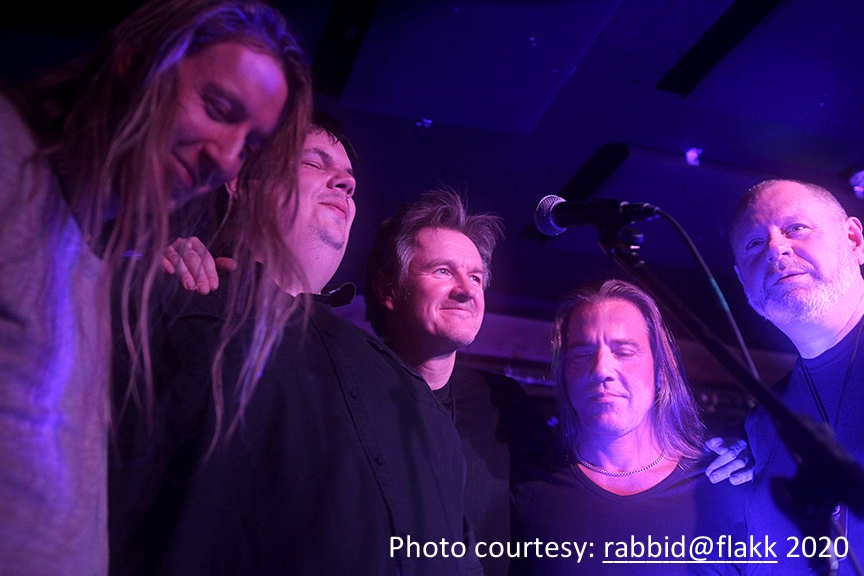 [All photos used by Richard Hallworth (unless otherwise indicated) with our thanks.]