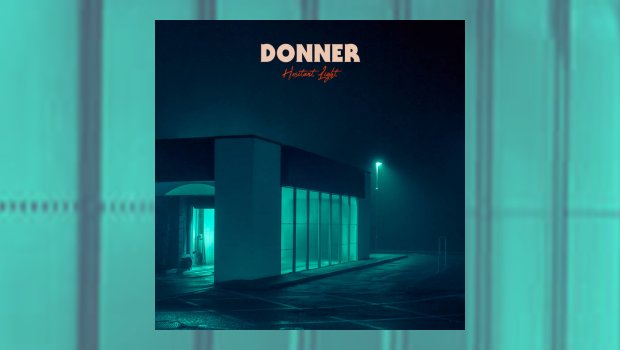 Jacob Holm-Lupo, known for White Willow, The Opium Cartel, his production, mixing and excellent remastering work, fronts this current project, Donner. The main aim for Donner is to be place where exploration and fiddling with synthesisers and other hardware forms bodies of “actual work”. As the project progressed more people became involved, mostly to offset the mechanical rhythms of sequencers and drum machines, thus adding a human touch to the music whilst still maintaining the original aim. As a result the album boast an impressive list of guest musicians.

The aim led to their motto, “moods and grooves”, and while the music is atmospheric, instrumentals inspired by ’80s John Carpenter and Tangerine Dream soundtracks, Jacob also got inspiration from George Duke and Herbie Hancock albums. Despite these influences on the musical style, and it is obvious that their effect runs throughout the album, these songs stand up on their own. The merging of influences has created something unique, different from what we are used to hearing these days, and that is a good thing.

The album clocks in at just over forty minutes with ten tracks, running times ranging from one-and-a-half to just under six-minutes. It has a beautiful sounding mix, and in keeping with its retro stylings the mix makes full use of the ’70s stereo feel, with synths swirling from speaker to speaker, a style which is most effective for those headphone listeners out there.

The opening track, Melancholy City, creates a moody, electronic atmosphere, with a touch of menace interchanging with a more upbeat feel, which all goes to capture the spirit of the title. This is followed by Hesitant Light where pulsing rhythms support the melody in a finely packaged song. Dance of the Swallows was released as promotional track for the album, a beautiful song led by some great guitar.

The high standard of the material continue throughout; Street Heat has a lovely bass groove with some nice guitar running over the top, the synth coming in to take over the lead, another track that reflects well musically on its title. Andromeda Waltz‘s deep synth throbs are set with lighter touches to deliver what could be a modern piece of music to dance the waltz to; another inspired title choice.

Jacob has written all the songs contained here, and a very fine collection it is, but there is one cover version included, his homage to Steely Dan’s Night by Night. Now as a Steely Dan fan myself, this is a bold move, but to me it kind of works; it is noticeably different in approach, in keeping with the album’s style but still recognisable to its source. It also benefits from some fantastic guitar work from the supremely talented Hedvig Mollestad and the inclusion of current Steely Dan sticksman Keith Carlock.

Overall, this is different to a lot of music of this style out there, but that is its success I believe. An enjoyable and consistent album which has been produced with a great deal of care and attention to detail. It has real warmth and a human quality to it, and it seems that the addition of the guest musicians has helped to lift it to another level. Well done Jacob!