A few months ago, the Italian prog band The Watch announced the release of a new studio album, The Art of Bleeding, the follow-up to Seven released in 2017. With information on the album limited, TPA’s Alex Driessen had no choice but to go to the source and get in touch with the band directly. Fortunately, singer/frontman Simone Rossetti had some time and was kind enough to respond… 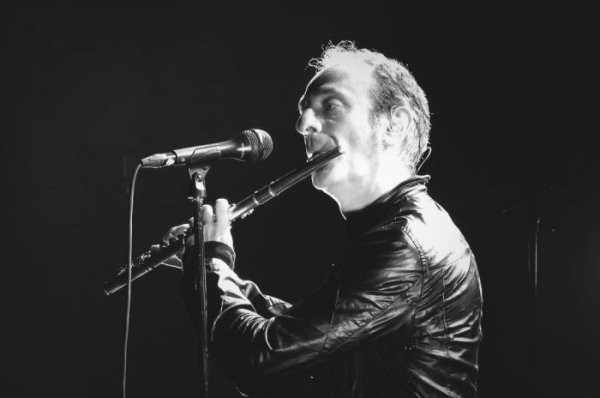 Let me first ask you how you are doing. Covid has had a huge impact on everyone, especially a hard working touring band like The Watch. How did you survive both from a health point of view as well as financially?

I’m doing fine, thanks for asking. Personally it’s been a very hard period from every point of view, like for most of the people. Fortunately, living in a village in the Alps has been easier than for other band members, for example, living in a city (Milan) where keeping safe distance or simply having safe access to food markets was a bit more difficult. Financially it is still hard for those who are pro musicians, we’ve been hit hard by restrictions, of course. If the government would treat us like some other industries, it would be easier. 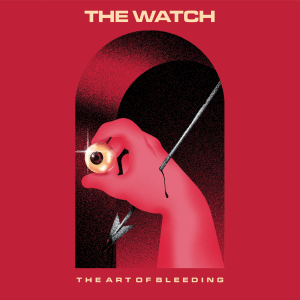 These days the market is flooded with albums that are written and conceived and inspired by the pandemic. Is that also valid for The Art of Bleeding?

I can imagine writers willing to describe these incredible times… but no, it’s not the case for The Art of Bleeding. Let’s just say the only impact the pandemic had on my music writing process was that it enabled me to have much more time for myself than usual. So I could really be focused on something that I always wanted to do, a concept album.

Could you please take us through the process of writing and recording the new material. Were they already pre-written or have they organically evolved?

More than ever we worked from a distance, but that wasn’t too different from the other albums. Me writing most of the music and working on arrangements with each of the others. Apart from keyboard parts which were played and arranged mostly by myself, as usual.

Am I correct in assuming the role of keyboardist Valerio De Vittorio is increasing both on stage as well as in terms of compositions and the overall sound?

Well, on stage for sure, playing mostly Genesis songs, keyboards are the main thing. The studio side is totally different, as I just mentioned. On this album Valerio contributed one song, Black is Deep, which I also like a lot, but apart from this it’s me looking after most of keyboard playing and arrangements. And this is natural as it’s me writing most of the music. Apart from this, the album also features a song from Nick Magnus, Howl the Stars Down, which is a gem to me and I liked the idea of having another version on our album.

There’s very little information about the topics on the new album except that’s it a concept album around the idea of cathartic violence. Quite intriguing but could you please elaborate?

The main topic is violence, something that we all abhor, but it is also part of our nature as human beings and if you look around us it is still there, very often. We want to keep ourselves and our families in nice, safe houses, free from violence, but then we all sit down and watch James Bond killing people and destroying things because it is exciting. There’s a lot of aggressiveness in our society today. Today’s violence can be much more subtle and hidden than the raw violence of history. For example the way people expect to have everything right away, and there’s no patience for things to happen naturally. We want everything to be quicker because we want more out of everything. That is an unhealthy form of violence.

Yes, it came out like this, a bit more electronic. But in our music keyboards, which are organs, pianos, Mellotron and various analogue synths, have always been the main structure of the music, leaving all the rest around it.

Why did you add the bonus disc with new versions of older songs? To act as an introduction to the band or as an example of how the music has evolved? Mind you, great to hear those familiar tracks once again, they have lost none of their power.

I would say both. It’s great that people who don’t know us from the beginning have a way of discovering more about our music. I’m proud of all our albums, there are not that many as we all did our utmost to get the very best out of ourselves on each and every album until we were completely satisfied. So being proud of them is probably a logical consequence. 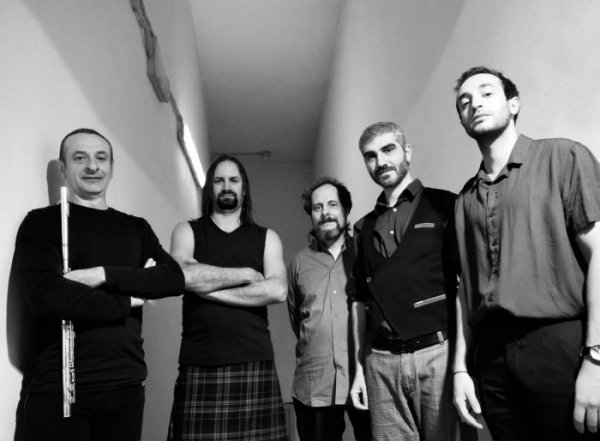 You have been the constant force behind the band, playing the flute, percussion and keyboards as well as being the lead vocalist and frontman. Does it agree with you, this space in the limelight?

Yes, it’s true and it’s the natural result of me as a musician. Music is my life and I like all sides of being a musician, from performing live to working in the studio, two totally different worlds that I both love.

Do you have any special exercises for your vocal cords? I imagine your voice takes quite a beating after two-and-a-half hours of playing.

I haven’t taken too much care of my voice in the past, but I should start taking more care with age. I don’t have any particular exercises, I just need to be rested as much as possible and don’t catch a cold and my voice will be OK. Sometimes, getting rest on the road is not that easy, so I try to do my best in this regard, trying to sleep for example anytime I can.

On tour you work together with your son Mattia. Peter Gabriel toured with his daughter Melanie; Steve Hackett plays on and off with brother John and sister-in-law Amanda. What’s it like being in a band with your son?

Of course it’s very nice. We don’t live together so it’s a way of being together, doing what we like. It’s different from staying together in our spare time, so it’s even more interesting to experience this sort of team work with someone from your own family.

Sometimes I feel you are the victim of your own success, playing the Genesis stuff. What is your view on that?

Hahaha, I wouldn’t say that. It’s very simple, I love Genesis music and having the opportunity to perform this on stage is a great honour. Then add that I’m getting paid to do this and you can understand how much I feel lucky for this. I think that when you like what you do everything is fine, the day I won’t like to be on tour with the guys anymore, I quit with this side of The Watch.

Somewhat in line with my previous question; I sometimes feel that prog audiences are very conservative and less appreciative of authentic/original material. What is your opinion?

Yes, it’s true. But I think it’s normal. And you can see this conservative approach in most of the fields of art. Just think about movies, how often we hear about this or that remake of famous movies. If people love something, they want to relive those feelings. I’m fine with this and happy about how our music is welcomed in any case. We get plenty of feedback everyday on how our music gives good vibes to people, sometimes getting messages even from small countries around the world that you have to check Google where they are on located. This makes you feel part of something and it’s just great.

The new tour is scheduled for October, you will also visit the Boerderij in Zoetermeer. Will it be a mixed setlist of The Watch originals and Genesis songs or mainly the latter?

It will be our ‘The Watch plays Genesis: A prog Journey 1970-76’, the tour we had to interrupt after the first show in Germany in February 2020, due to the pandemic. It’s mostly Genesis music as you can guess from the title. 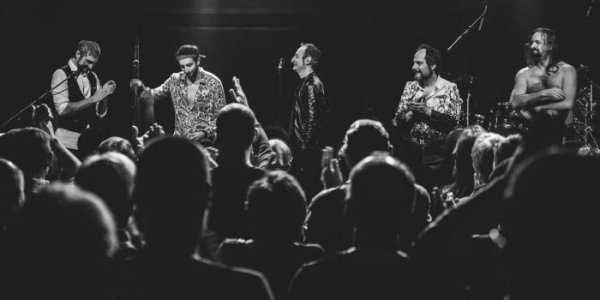 The new tour once again features Genesis/Gabriel-era songs, did you ever consider exploring the Collins-era? Interesting to learn what Genesis would sound like with Gabriel on lead vocals!

Hahaha, we perform two songs from Trick of the Tail during this show. I like Genesis after Gabriel’s departure so why not? Especially when I can sing Collins’ parts, of course. We did it in the past, playing some stuff from Duke, an album I personally like very much. And we enjoyed the result.

In addition to my previous question, a particular request from a true fan: if you ever decide to play Collins stuff, could you please include Mad Man Moon from A Trick of the Tail? Genesis itself has never played this piece live, too difficult I presume.

Hahaha, we did this one a few times in the past. Problem is, the music parts are more than difficult to play. Some songs are great on the album, but aren’t as perfect like in the studio when you play them live. But I totally agree with you, that particular song is great. I think it’s a good example of Tony Banks’ great and unique music writing.

Having said that, never tired of playing other people’s music?

Well of course, when I was young, in different bands. I happened to sing and play different music genres. I wish I could play something from The Beatles one day. Who knows?

Any chance of a new live album? The Watch Live dates back to 2009, and you are at your best in a live setting.

Who knows, perhaps in the future. We should be able to perform much more of our own stuff in Belgium, in May, and they will record it. Let’s see what happens then.

Any last comments or message for our readers?

Join us in this journey of The Art of Bleeding and take your time for a proper listen as you were used to, so many years ago.

I hope to see you at De Boerderij, a special place for us and always very nice to perform there.

Thank you Alex and all the readers for your attention and your time. 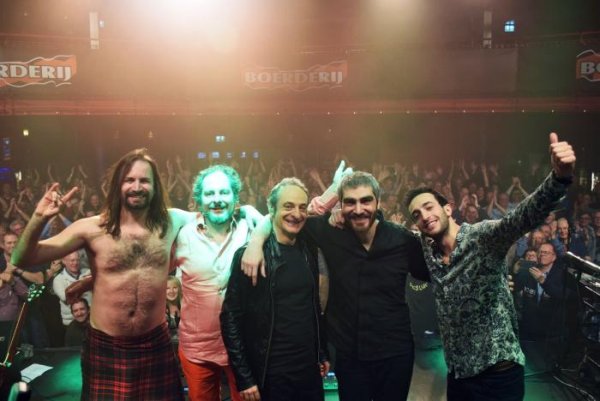 You can read Alex’s review of The Art of Bleeding HERE.