Steve Howe, is looking forward to releasing his latest album – and his first for nine years –  through BMG Records on 31st July. Love Is is Howe’s first solo album since the all-instrumental Time in 2011.

Many years in the making, Love Is features five instrumental tracks and five songs, a consistently strong and polished package and may well be one of the best albums of his solo career. The instrumentals keep a highly progressive rock guitar style to the fore, while the songs that explore stories of lives lived and lives only just begun. Love Is A River is the central longer song with several textural shifts, featuring a theme played on 12 string and steel guitars. Steve Howe sings lead vocals and plays electric, acoustic and steel guitars, keyboards, percussion and bass guitar on the instrumentals while Yes vocalist Jon Davison provides vocal harmonies and plays bass guitar on the songs. The album also features Dylan Howe on drums.

Steve is always busy and has had a lot going on in his life since the last solo album. When we spoke, recently, he began by explaining how the new album came about.

“All my albums have music from different eras of my writing. In one respect, when I released my last album, it was 2011, it was an instrumental, it had orchestration on it and I collaborated with Paul Joyce. He was an arranger and that was what I wanted to do, arrange. After that, I was in no hurry to cut another record straight away but I had tracks laying around. I guess, after a couple of years, I started to think ‘If I’m going to make another record I’d better act and write lots of material and build up a backlog of material.’ The title track is one of those tracks that take a long time to formulate and get to the level of feel and parts and harmony and all the things that they need.

“Gradually, since Time, I started to come back to this project. Any back burner project, that isn’t an Asia record or a Yes record or a Yes tour or solo tour or a trio project, has to fit in between those things and this is partly why an album can take a while. I was accumulating tracks and I noticed that I had a fair share of instrumentals and a fair share of songs. I guess I kind of whittled them down a bit and made decisions, threw one away and a new one came along. This is the process of making a record, it’s not easy to describe.

“Love Is A River just seemed a very important track to me, sort of quintessentially me with lots moods, lots of interesting things going on with steel guitars and acoustic guitars. I was merrily thinking that it could fit in somewhere but then the other tracks grew from my time when I write in my own studio and then I went to see Curtis Schwartz in his studio. We expanded the tracks and put them on Pro Tools and everything starts to be possible.

“At some point, probably around three years ago, Dylan came down to Curtis’s studio and we recorded the drums on these and some other tracks. That further condensed the idea, I could see a balance of instrumental tracks and songs and there was a feeling that it was an album, ten tracks sitting there, looking at me.

“I just kept, kind of, detailing it, going back on tracks and then a couple of years back I invited Jon Davison to sing harmonies with me and just add bass on the songs. I felt the instrumentals had my bass and I was quite happy with it and I didn’t want to bother him with those. If he was singing on the five songs then I thought why doesn’t he play bass as well, so he did that and it turned out nice. 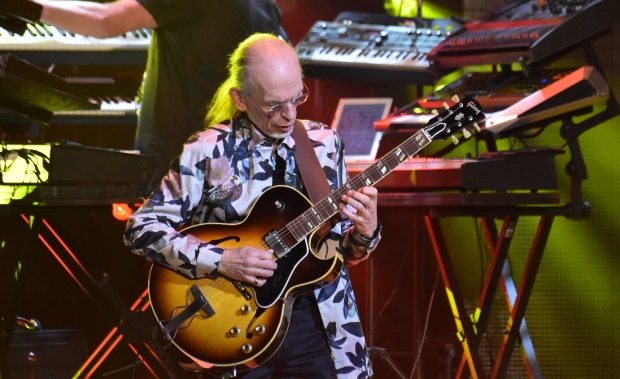 “I’d got most of the ingredients, so it’s going back and adding the details, different overdub sessions, different mixing sessions, gradually building up to what we have, finally finished and coming out.”

The final product is a very identifiable Steve Howe album, a very impressive set with lots of Steve Howe signatures that will please his fans. Steve added that it was good to record with current Yes vocalist Jon Davison.

“Yes, sure. He’s been with Yes for seven or eight years and he’s a great guy, great performer, a great interpreter of Yes songs. I thought ‘Well, why not, he’s a great singer, it can’t hurt!’ I’ve been singing for years, mainly in harmony but I’ve sung lead on lots of my own albums before. I feel that, as I’ve got older, I’ve got a grip on that and, hopefully, it’s improved over the years, but it balances with my other work.

“And Dylan came down, did lots of drumming and he’s excited the album’s coming out. We had a trio album out last year, that took quite a few years to make after it was recorded, mixing it and finessing it. Sometimes you think you’ve finished and then you go, ‘ No, I haven’t really, this isn’t quite right.’ Then you go back and you work it a bit more and that’s the beauty of production and why I like producing. I’m at home producing myself and I have this golden rule on solo projects and there aren’t really any problems: I work with people I like, everybody gets what they deserve from it and it’s a happy affair. I like to keep that very simplistic. Groups are very complicated, you have to balance other factors, and that’s a pleasure too but on the solo projects it’s very much a pleasurable experience to be able to direct it so that it all has the right feel.”

Steve went on to explain the story behind some of the tracks. 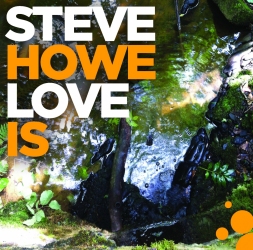 “Believe it or not,” he laughs, “there’s a story behind all of them but it’s not really a verbal story, it’s an emotional story, it’s things we experience in life. On The Balcony’s quite like that. Dylan gets quite improvisational in a couple of areas. It’s a funny kind of song, it’s almost a bit sixties, in a way, a slightly Tomorrow feel some of the time.

“Imagination is dedicated to my granddaughter Zuni, it’s about how I see some of the things she’s experienced in her short seven years. It’s kind of a story about being a grandparent as much as a person working and collaborating with other people in life, not so much in music but in life.

“See Me Through is a blast of an idea that seemed to self-generate, the idea that we get through life by, not driving ourselves that hard but by attempting to achieve things. People help you on the way and I kind of reminisce about the early days when I used to smell the daffodils, a reference to the seventies, in a way, remembering what those things were like.

“The subject of my songs is, emotionally, about my life. I don’t like to make it too obvious and I’m not going out of my way to make it too vague but, on the other hand, I don’t want face value lyrics all the time, I want lyrics that have got some depth and hidden meanings to me and that’s a kind of a tease, I suppose.

“I might have a song that I think ‘I’m not going here but I’ll extract ideas from it.’ In a way, it’s still going there but it’s more secretive, more a pastiche, another version of something. It’s development really and that’s what music takes, that’s what the parts and the instrumental sections in the songs and the instrumentals are about. My music is mainly a vehicle for my guitar playing, whether a song or an instrumental but that guitar work is a variety of things. I like to have that incredible freedom to make albums that have a continuity about them. In the early days I just did everything I thought I’d like to do and found that the musical diversity in them was extreme. I think the last one I made like that was Elements which had a rock, jazz, bluesy feel, which is a little different from my main train of thought. Usually, with Quantum Guitar, Spectrum, those kind of albums are very much the prog guitarist. That’s always underlying in Love Is, as well.

“I called it Love Is, Love Is A River was a bit of a heavy title. It hints at the central idea that began with the hippies, that love is important but also love and the universe, the ecology of the world is very important. For 200 years people have been saying we are destroying the planet, ever since Alexander Humboldt went around the world and recognised we are destroying the planet but that was 200 years ago! We are still destroying the planet and I suppose, in some ways, some of my songs show a yearning I have for the love of nature, how beauty stems from nature and how art stems from nature, too, and music stems from nature. I would say there is a theme about those things, love, beauty, ecology, nature and wonderful people.”

The instrumental tracks include a variety of styles from the delicate beauty of Fulcrum, Beyond The Call and Pause For Thought to upbeat rock, The Headlands, and the jazz-tinged Sound Picture.

“The instrumentals are like it’s a mood, a place I went to one day, thought this is nice and then I develop that to a point where it’s a finished track. There might be key ingredients that I thought about using musically that I like, that I’m drawn to, and then I think that’s going to develop into something. That’s what I try and do, cream off the things that fit together. It might be a vague continuity but there is a level of continuity to what I do.

“Yes was a great opportunity for me to diversify. Having the freedom to play our own music was the most important ingredient about it. Sure, I became a top guitarist, won lots of awards and all that and my guitar work is central to it but still the writing and the importance of having an outlet for those emotions and colours and pallets of sound, from pedal steel to 12-string acoustics. The thing I like to do is to dabble with the whole family of guitars. I can’t really explain why. As the years have clocked on, I haven’t got tired or gone ‘Shut up with those guitars!’ Instead I’ve kept endorsing my interest and enjoyment for the guitarists who have gone before me. I’m just a part of that guitar legacy, I guess.”

[You can read Bob Mulvey’s review of Love Is HERE.
Photos by Geoff Ford.]