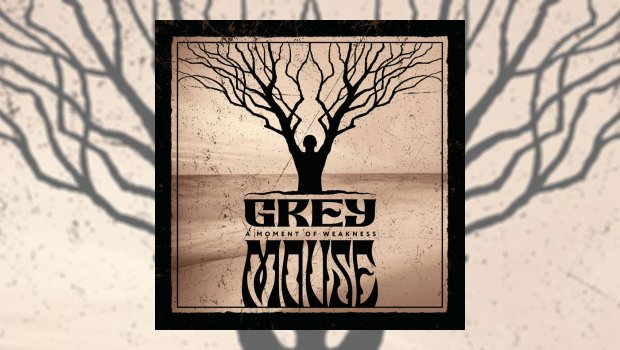 Grey Mouse – A Moment of Weakness

I first came across Russian band Grey Mouse last year, with the release of the single Better Than Me, from the (then) upcoming album A Moment of Weakness. I admit that I knew nothing about the band, and from wherever I saw the single shared, the thing that grabbed my interest was the cover art as it immediately reminded me of another mouse – or rather mice – Mice on Stilts, to be precise. I listened to the song, and (of course) it sounded nothing like Mice on Stilts. Furthermore, when I dipped into their back catalogue, it seemed to sound nothing like anything the band had released previously either. Grey Mouse have been a constantly evolving entity (in terms of their music and personnel) since 1990, or thereabouts, with their leader, Alexey Chunikhin, being the only constant.

The biggest difference between A Moment of Weakness and what I’ve listened to from their previous releases is the vocals. Apart from being a far more song-based album than previously, the vocals of Mikhail Kudrey couldn’t be more different from previous vocalists; and not just because of his gender, but in tone, mood, style – everything! Kudrey has an incredibly expressive voice that couldn’t fit the music of this album more perfectly. And the music? Well, yes, that has definitely changed. Stylistically, I guess it still has the progressive psychedelic base that has always been there – but it really is just a base now. The backbone supporting a complete work that has elements of folk, doom, stoner, country, blues, metal and goth. And though electric instruments are used, the feel throughout is more acoustic. It’s sparse and expansive, with space being used as effectively as any instrument in the mix. This means that when the sound becomes fuller or more electric, it has a great deal more impact than it would otherwise.

If Kudrey provides one of the star turns here, the other is certainly Uliana Volkova, whose playing of the cello provides so much of the haunting and melancholic nature of the music. Cello has never sounded so good, nor been so integral, to a rock album. Between Kudrey’s vocals soaring over the top, like a more subdued Bruce Dickinson, and Volkova’s cello providing dramatic flourishes underneath, the rhythm section are working full-time, and sounding fantastic. They sound as good playing with the flow of the music, or against it. I love the way that sometimes the rhythm section are playing a quite up tempo beat that directly contrasts with the downbeat guitar, vocals and cello. Two drummers play on the album, each with their own style, but neither imposes that style on the music, so that if you’re not paying attention, you probably wouldn’t notice.

This is the kind of album that I can imagine there may be some readers questioning why it is being reviewed on a progressive website, but to my ears it definitely fits the bill. Too heavy to be called prog folk, and not metal enough to be called prog metal, it has the sensibilities of both, with that constant undercurrent of psychedelia that is reminiscent of The Doors at their most (self) destructive. If push came to shove and I had to compare them to any other band, it would probably be Indukti. Both bands have a sound that is one part melancholy, and one part menace, and play a heavy style of prog folk, bordering on metal. Indukti has the violin, and Grey Mouse has the cello, so this does make it even easier to make the comparison – but that is certainly not the main reason I am reminded of Indukti. On the other hand, while not ever sounding stuck in the past like some retro bands, Grey Mouse definitely evoke bands of the ’70s, such as the aforementioned Doors, as well as Spooky Tooth and Black Sabbath.

None of this seems apparent in the opening track, the instrumental Backwater, which is solely played by band leader Chunikhin on guitar. But as the second track begins with similar guitar stylings, and then the full band, it becomes clear. This is something special. Never explosive, but always incendiary, the music is constantly flickering in intensity, and as hypnotic as staring at the flames of a fire in the darkness. Dark Road reminds me a little of Acoustic Verses era Green Carnation. Better Than Me follows, being the song that introduced me to the band – and it’s actually my least favourite song on the album! My favourite part of this song is the change that occurs partway through, and this is a trick the band plays often throughout the album. It’s easy to fall into the trap of thinking you know how a song is going to go, but Grey Mouse definitely do not stick to conventions, and some of their surprises are delicious!

On The Run begins sounding almost industrial, or like a dark ambient piece, before hitting a Sabbath-like groove. Rat Race, on the other hand, has an introduction that sounds caught somewhere between the jangle of indie pop and the gallop of metal. This constant variation in style is impressive given how the band manages to maintain an overall consistency in sound and mood, and maintains interest in the album throughout its length, where the darkness and melancholy might be otherwise overbearing or overwhelming. A Moment of Weakness doesn’t have a moment of weakness for me, and is an album in near constant rotation. No matter what I listen to, I seem to find myself returning to this album. It’s deceptively simple sounding, with enough complexity and variation to keep me coming back for more.