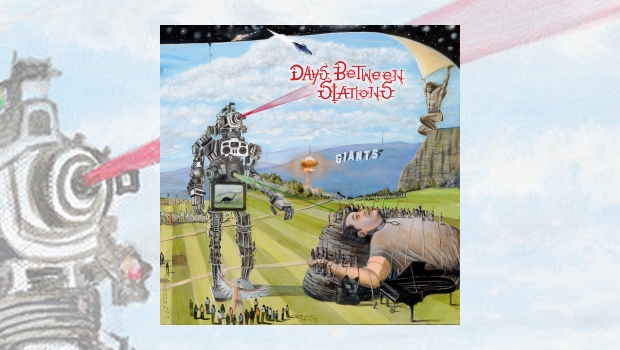 Sepand Samzadeh (guitars) and Oscar Fuentes Bills (keyboards) met in 2003 and have been making music under the Days Between Stations project name since 2007 (based on the title of Steve Erikson’s debut novel). However, it was only with the release of their third album, Giants in September 2020, that I came across them… and I’m very pleased I did, too.

Giants is one of my albums of the last year and is a sumptuous slice of ’70s epic prog rock with a modern edge, intermingled with a range of compositional styles and moods across the seven tracks.

Fuentes and Samzadeh are joined by a number of guest artists for this, their most proggy album, and it is the presence of Billy Sherwood of Yes which contributes to the soundscapes resulting across most of the tracks. He previously co-produced their second album in 2013, but here he contributes vocals on most of the songs, as well as bass and even drums. The combination of personnel works very well.

The album kicks off with an almost 17-minute epic, Spark, and the ’70s Yes/ELP-style keyboards set the tone for a lot of what is to come. Sherwood’s driving bass and strong multi-tracked vocals, allied to the ebb and flow in tempo of the retro keyboards and some lovely plaintive guitar runs, makes it a great start to proceedings.

However, the beautiful, piano-led and multi-layered ballad Witness the End of the World provides a refreshing contrast, and the rich vocals of Durga McBroom (Pink Floyd touring vocalist) are a real treat. Last time I heard her was on some great backing vocals to the ‘Prog From Home’ version of Dave Kerzner’s Into the Sun (one of my lockdown highlights from those dark days).

Another Day has some of the best, most emotional vocals I’ve heard from Sherwood, supported by deep, growling bass, and flowing symphonic prog ensemble work – the pace often mirrors the labours of Sisyphus as he pushes the boulder up the hill day after day, to great effect.

Fourth track Goes by Gravity is a complete contrast and shows that the band do not want to be tied down to a particular prog-style all the time. The distinctive vocals of XTC’s Colin Moulding accompany an ’80s synth-sounding piece of power pop/art-rock that would have not been out of place in his former band’s singles catalogue. Wickedly catchy, it’s an earworm that will stay in your head for a while, if you let it. It won’t be everyone’s cup of tea, but it’s a quaint diversion before a full return to prog rock on the title track.

Giants might be four minutes shorter than Sparks but it is another epic and more than its equal. A piano introduction and soothing flow of guitar and keyboards, with almost Big Big Train-style lyrical content, gradually opens up in true Transatlantic or Wobbler fashion, with lush instrumentation, searing solos and even a Floydian ending to bring it to a close. Lovely stuff!

After that, the final two tracks would always struggle to match that intensity, but the instrumental The Gathering packs a lot into its four minutes. A late-night jazzy piano gives way to Hackett-like acoustic guitar, the pace picking up steadily as the layers of music are applied.

Final track The Common Thread is a Sherwood-written song and could easily fit on a latter-day Yes album – especially with the Howe-style soloing and the vocal harmonies that conclude it. With funky, rich bass, the vocals are almost Winwood-like at times. It’s a good track but perhaps lacking the coherence or ‘wow factor’ the earlier epics had.

The overall result is a fine prog rock album which deserves a much wider listening on this side of the ‘Pond’. Funetes and Samzadeh are very talented musicians and composers who have benefitted from some of the best work I have heard Billy Sherwood deliver for some time (as if freed from the weight of expectation he faces from some Yes fans in filling the shoes of the iconic Chris Squire). He even does a respectable job on the drums, although I did wonder what a more experienced progressive drummer such as a Gavin Harrison or Craig Blundell might have added to the party. Maybe next time?

Finally, it is great to see Paul Whitehead supplying the album cover art – a real bonus. I didn’t spot any croquet mallets and hoops on the lawn, but they might be there somewhere!