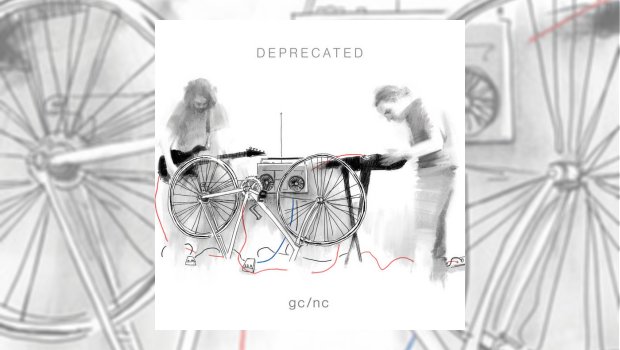 I very rarely quote from a band’s own description, but in the case of this gc / nc album, Deprecated, I feel it is almost unavoidable. I could direct you to look at the cover art, but it doesn’t explain just how creative the sounds of this release are, made by way of a bicycle. So, here goes: “The wheels of the bicycle are controlling the sound of their instruments – a guitar and a synthesizer. The musicians have to spin the wheels to produce sound. The bicycle wheels open up new sound possibilities for the musicians, but function also as disruptive elements, a voluntary self-sabotage, since they are not able to play their instruments in the conventional manner. Piezo discs enable them to use the bicycle as a percussive instrument and to create tones with the spokes. A radio is used to record small fragments of radio channels which are directly used in the performances. When on tour, gc / nc always borrow a bicycle from a local, which they then prepare for the concert.”

In a way, I could probably stop writing the review right here. I suspect from that opening paragraph the vast majority of people will either have switched off, knowing that this album is not for them, or will already be intrigued, and probably give the album a listen. But I’ll try and explain about how intriguing and enjoyable I find this music to be. For a start, it doesn’t really fit any genre. It comes close to several, while never quite fulfilling what people usually associate with those. For example, the music is often reminiscent of a lot of industrial music, but it’s just too irregular and extempore. It’s just too human to be industrial. Similarly, it is often reminiscent of a lot of electronica, but again it’s just too human. It’s almost ambient, but it’s too kinetic, and too spontaneous. It’s almost noise, but it’s too melodic. It probably helps if you like one or more of those genres (and I enjoy them all), but it’s also not entirely necessary. Even in terms of improvisation, it’s hard to deny that some of that improvisation is involuntary, due to the nature of the way the bicycle both creates and sabotages the attempts to make music from it.

So, Deprecated is involuntarily improvised industrial electronic ambient noise. Doesn’t sound particularly attractive, when put like that though, does it? And yet, there’s something really quite beautiful about this music. The elements of imperfection that are prescribed by the randomness of the bicycle make the music delightfully accessible. A lot of industrial and electronic music puts off some listeners because it is so mechanical – so inhuman. Despite it being a mechanical object that is creating the more arbitrary nature of the sound, Deprecated sounds the opposite. It doesn’t sound mechanical. It’s warmer, more human. There is melody, and at times hints of harmony. While some passages emphasise the machine over the human, the human presence is still always present. I think this is what elevates the album beyond any more typical industrial, electronic or ambient music.

And yet, there’s no getting around the more mechanical nature of the music. Even the album title hints more toward the technical definition than that used by most people. In general usage, ‘deprecated’ would mean expressed disapproval, but in technical usage, it is merely a recommendation not to use something, as it is becoming, or has become, obsolete. Given that gc / nc are exploring sounds that could be considered to come from obsolete sources, this is an entirely appropriate title – although it’s perhaps stretching to call a bicycle obsolete in sound recording, as I’m not sure how much it would ever have been used prior to this! What’s most impressive to me, though, is that due to the nature of how the sound is created, this is instant and real-time composition, which is quite unusual for much industrial and electronic music. gc / nc are improvising, synthesising and treating their music on the go (so again, how appropriate it is to be making the music from a bicycle!).

It is this sense of movement that makes Deprecated flow so well. There’s a physicality and tangible kinetic energy that propels the music along, and the listener with it. There is always a sense of moving forward, and at times it can be a little disorienting (that may just be me, but honestly, if I listen to the music with my eyes closed, it’s a very odd sensation to be sitting still, yet feeling in motion). What’s even more impressive, for me, is the fact that the gc / nc duo have been making music with bicycles for so many years now. The technology may be deprecated, but the resultant music is constantly being reinvented. Viva la revolution!