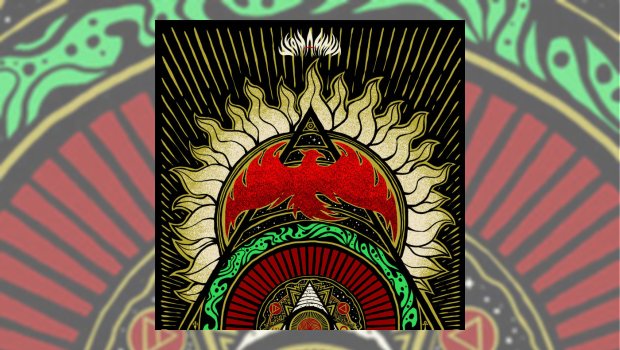 This is a review of Ufomammut’s latest album, Fenice, but I’m going to begin by writing about an earlier one. That might seem a strange thing to do, but it feels right for me. My descent into the dark and doomy world of the Italian trio was by way of their 2015 album, Ecate. Coming after a double album released in two parts, Ecate managed to reunite a divided fanbase, who saw it as either a return to form, or a continuation of form, after Oro. Oro is certainly more celebrated now, retrospectively, than it was at the time, where many fans were not so favourable in their reception of it. In the case of new album Fenice, rather than a rebirth of inspiration as perceived by the fans, is a rebirth of inspiration as perceived by the band. The cover art shows the titular Fenice (Italian for phoenix), and is easily the most gorgeous cover art I’ve come across so far this year. I love it! But hold on, isn’t it also very similar to the cover art for Ecate? It really is, and so I can’t help comparing this new album to my first and, until now, my favourite Ufomammut album.

While Ecate is an album that portrays the aspects and characteristics of the Greek goddess Hecate, the cover art always made me wonder if Ufomammut were recognising that many scholars believe the Greek Hecate had her origins in the Egyptian Heqet, who was a goddess of birth and re-birth, and a guide of the Underworld. Hecate, like Heqet, is a symbolic gateway between the worlds of the living, the deified and the dead. The cover art for Ecate, though, evokes a more Egyptian vibe than Greek, with its pyramid form which, with several repeated motifs, appears again for the cover art for Fenice. And the song titles, as well as the cover art, now imply that it is Egyptian mythology that is the main inspiration. Before I had even listened to a note, I was already captivated and entranced by the vivid and colourful cover art that was so reminiscent to me of Ecate, and looking at the song list merely had me even more excited to hear what the band had in store – particularly when they have named the album after the phoenix, and explicitly stated it is a representation of the rebirth the band feels it has undergone.

Often called a sludge or doom band, Ufomammut has always been so much more than that, with healthy dollops of experimental drone, psychedelia, post- and noise-rock added to their pulverising heaviness. You may as well add industrial to that mix, as I’ve read comparisons before to bands such as Ministry and Nine Inch Nails. And while Ecate and the album that followed it, 8, opened with the shattering intensity and momentum the band are so much the masters of, Fenice’s opening number, Duat, is more meditative than destructive. Ufomammut have long been masters of dynamics, atmosphere and ambience (and you’ll often see their more spacey moments compared to Pink Floyd, Tangerine Dream or Hawkwind), but even so, Duat surprises by just how expansive and minimal its opening sounds are. Oro, for all its differences, moved into a more familiar and dense bone-crushing wall of sound after its ambient opening. Yet, with Duat, even when the riffs crash in, they are full of space. Space as a void, and space as otherworldly. Or, perhaps, underworldly, given than Duat is the Egyptian underworld.

What is nice about the track, though, is that it really does convey the difference between the idea of the Egyptian underworld, and the Classical underworld. This sounds nothing like Plouton from Ecate, and nor should it. Despite Egyptian and Classical mythology sharing a lot of similar concepts, their underworlds were very different. The Egyptian underworld was where souls could be reborn. The only punishment after death was if you were judged not to be worthy of rebirth. The Duat was also where the sun god, Ra, passed through every night, and once more I’m drawn back to comparing Fenice to Ecate, for Kheperer reminds me very much of Ecate’s Chaosecret. And yet, as with Duat and Plouton, it is very different. Every night in Duat, Ra battled Apep, the personification of Chaos. Each day the Sun was reborn from nothingness, (re)created from nothingness, the primordial void, chaos. Sometimes seen as a solar deity of his own, and sometimes as an aspect of Ra, Kheperer was god of the morning sun, and of resurrection. So while Kheperer is reminiscent of Chaosecret, it is less threatening and malign. (Interestingly where Duat is long, and Plouton short; Kheperer is long, and Chaosecret short. I find that kind of cool.)

Kheperer takes us to Psychostasia – the weighing of souls. And while a Greek word is used for the title, no doubt we are meant to be thinking of the weighing of a dead person’s heart against a feather, overseen by Anubis. If the heart was lighter or balanced with the feather, then the dead would be presented to Osiris, who took them to be reborn. If the heart was heavier than the feather, then it was devoured by Ammut (and who can’t be tickled by the similarity of that goddess’s name to that of the band), and the soul was permanently destroyed and denied resurrection or immortality. As such there is a great deal of tension as Psychostasia begins, which is quite appropriate when one’s life is literally hanging in the balance. But at its heaviest it is triumphant and jubilant, and there is no doubt that this heart has passed the test. Even though the track has vocals, it needs none (and, as is so often the case with Ufomammut, they are so far back in the mix as to be largely unintelligible anyway), and conveys the mood and imagery amazingly and beautifully. I realise I’m not writing too much about how the album sounds, but the Bandcamp page does such a good job of doing that, that I don’t really feel I would be adding much in trying to describe it myself. So mood and imagery is where I’m at.

With that, it is now time for rebirth, and suitably the following track is Metamorphoenix. A clever play on words, although this is more metempsychosis than metamorphosis. And, of course, as we are in Ancient Egypt, the phoenix is Bennu – the ancient god of the sun, creation, rebirth, and immortality, that developed into the phoenix of Greek mythology. Like the phoenix, Bennu would periodically renew himself, and “rise in brilliance”. As for brilliance, well Pyramind simply shines as a slab of Ufomammut heaviness as only they do. It’s worth pointing out here that Fenice is, as Ecate was, six components of one whole. But this album far surpasses Ecate in that regard, and plays more like Eve, as one long track with recurring themes and rhythms, albeit presented in different forms. There is, for example, the briefest gap between Pyramind and Empyros, but blink and you’d miss it, and could easily think you were still listening to the same track. With Empyros being Ancient Greek for “on fire”, this is an unsurprisingly incendiary final number. Ladies and gentleman, Ufomammut announce their rejuvenation. The band is dead. Long live the band.