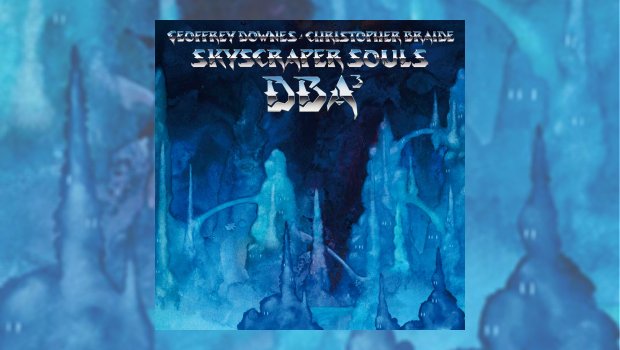 It’s hard to believe that it’s been 40 years since Geoff Downes and Trevor Horn formed new wave duo The Buggles. Given their musical style, it was surprising that they would go on to join prog rock giants Yes for the Drama album. Downes would later co-found Asia while Horn concentrated on music production; both former Buggles enjoyed great success.

Something of this history goes toward explaining how it was that the Downes Braide Association came into being. Chris Braide, a long-time producer and writer for some of pop music’s most internationally celebrated artists, had previously worked with Trevor Horn and featured on The Producers album, Made in Basing Street. The discography of artists Braide has written and produced for reads like a who’s who of past and present pop A-listers; this fact accounts for some of Skyscraper Souls’ acclaimed guest musicians.

Downes Braide Association’s debut, Pictures of You (2012), was Braide’s homage to the artists of the late ‘70s that inspired him, including The Buggles, and as such it is more in that style than it is Yes or Asia. When I first heard it, I didn’t have very high expectations, but, given their pedigree, I shouldn’t have been surprised to be blown away by the quality of the songwriting and the production. I must confess to not being overwhelmed by reunion Asia so Pictures of You was to these ears Downes’ best work in some time. 2015’s follow-up, Suburban Ghosts, was also excellent, if not the equal of the debut.

For Skyscraper Souls, the duo’s third album, Downes and Braide have made some changes. Out goes the electronic accompaniment and in comes a proper rhythm section with Ash Soan (also of The Producers) and Andy Hodge, making it sound more like a band than a studio project. The album also features a variety of guest musicians from the worlds of prog, pop and new wave to really build on and develop the sound. The results are awesome and worthy of consideration from all fans of melodic rock and prog.

The title track is the album’s centrepiece. At 18 minutes, it may seem to be a daunting listen at first, until one realises that this is more an interconnected suite of songs (similar to the brilliant Sunday News Suite from their debut). The opening part of the song is the main theme, an uptempo melodic rock piece with a very strong verse and chorus. This is followed by a piano/vocal section that is classic Downes, a barnstorming guitar solo from Dave Colquhoun and a softer vocal passage from B-52’s Kate Pierson. After a return to the main theme, the pace slows down for the Dying Light and Ocean Child passages.

I must admit, it took me a few listens to appreciate the whole of this song, and I do wonder if it might not have benefited from being just a few minutes shorter in the second half, but the various keyboard, guitar and vocal components, to say nothing of the production, are so superb that I never find myself tempted to skip forward.

The album’s longest piece is followed by one of its shortest, a homage to Kate Bush entitled Glacier Girl. Geoff Downes notes that this was intended to be an instrumental and, as such, he doubted that it would be something that would fit with DBA until Braide was able to mould a melody around it. It is the album’s most beautifully melodic moment, with the cascading piano and vocal melody leading into some mesmerising mandolin from XTC’s Andy Partridge.

Back to the full band sound, Angel on Your Shoulder was originally intended as a Buggles track and has a big, anthemic chorus. Braide suggests this is the most ‘Asia’ sounding track on the album and I am inclined to agree. The guitar work has the hallmarks of early Asia and the hammered 8’s on the electric piano are reminiscent of both of Downes’ earlier outfits.

The next track, Tomorrow, has a compound time signature that gives it a folky feel. The addition of multi-instrumentalist, David Longdon from Big Big Train, makes for a beautiful piece of medieval-style rock. Longdon’s vocal harmonies and flute are exquisite and the closing passage featuring the flute and Downes’ harpsichord to a series of key changes is nothing short of majestic.

Lighthouse is a more conventional rock ballad with another very big chorus and another superb guitar solo. Skin Deep is a ballad which features Marc Almond duetting with Braide and has a lovely synth riff that fits Almond’s style very well. Darker Times sees the return of Andy Partridge to close out the album’s last full track with a deliciously proggy guitar solo.

Overall, this is a magnificent album which is consistently excellent from start to finish. If I had one small gripe it would be that a couple of the tracks are a little longer than they need to be but, other than that, this is an album of gems throughout. The inclusion of a band also leads one to consider the intriguing possibility of seeing this live. We can but hope.