A significant gig took place approximately this time last year; it was the last-but-one for me before the COVID 19 pandemic shut live entertainment down. More importantly, it was the last at which I would see Frosty Beedle play drums for Lifesigns; he announced his departure three months later. His talents and all round gentle and gentlemanly demeanour will be much missed.

One of my preferred venues, The Half Moon can be adapted to any audience. On this night no café-style tables and chairs were needed as it seemed pleasingly full; a goodly sized audience for the band considering the uncertainty and trepidation surrounding the inevitability of lockdown, which was in operation only twelve days later.

I’ve rewritten this review several times, having felt in abeyance after the gig, unable to simply compose and submit. A sense of it being incidental to the pandemic, or perhaps just inertia, set in, but it was mainly that it couldn’t be of enough service at the time for the band as would normally be due; that it could be perceived as a sad reminder of the events that people would be without for however long to come. On a personal note, it was the last time I hugged another human being; two hugs actually. I was a delighted recipient for the first, the instigator being Lifesigns leader John Young himself, who is an Olympic hugger and therefore his enveloping is irresistible. The second, for whom I was the hugger, was with Mistress of the Merchandise Extraordinaire, the lovely Julie Crowe, who, like most people John knew there, will have been on the receiving end of a similar embosoming as the one I described earlier. I suspect John’s contribution to stocking up the mental hug bank served us all well for the ensuing months.

Now, with the third lockdown easing, venues set to re-open soon, and with the release of the new album Altitude, it seems a good time to revisit what was a terrific gig.

The set comprised a couple of older classics from the first album Lifesigns, almost the entire second album Cardington, with a few re-imaginings from the John Young Band days and the live album/DVD Under the Bridge, plus a completely new number, all set to appear on Altitude.

Kicking off with Lighthouse, a fabulous opener with its eerie apprehensive beginning anticipating sublime melodies and inspirational positivity, the mood was set for a somewhat more rocky version of Open Skies than some might have been expecting. Additional guitar licks and the extra keyboards, both from the supremely talented Dave Bainbridge, enabled the full surge of this song to blast proceedings onwards into Different, then Ivory Tower – the first of the re-jiggings from JYB days. This served to temper the mostly rocky numbers of the set with the softer, slower ballad side of John Young’s compositions. Its delicate twinkly start and contemplative lyrics, effortlessly delivered with John’s intense personal vocal, conveyed a sense of poignancy and introspection for the story behind it, but back to a forceful form it went for the final section. Next came Touch with its goosebump-inducing earworms and catchy audience clap-along bit, alongside the opportunity for Frosty to let rip and bring his talents to the fore via a mini solo drum section. 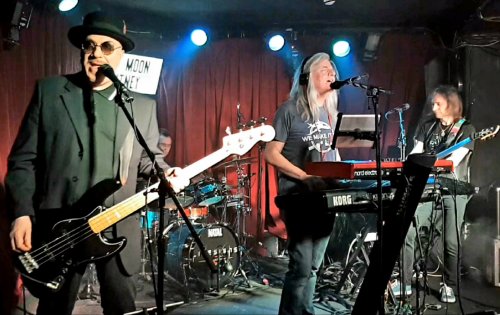 Just ahead of the last song before the customary interval, a little hilarity ensued via an anecdote from John and the bounciest bassist ever, Jon Poole, concerning a TV interview to promote the then single release, in which Jon’s unique mind instantly fabricated bizarre names of non-existent bands. Sadly my phone’s notes became indecipherable, probably because I was laughing too much (JY later remembered half of one, ‘Something Arsonist’). The ensuing rendition of Impossible embraced pure pop catchiness amid much cheering from the audience.

While I consider that the entire band really should go for a lie down and to put their hands in buckets of ice, the interval serves as an opportunity for them all to mix and mingle, such is their generous nature.

Cardington began the second half, the duo keys being most impressive here leading to the guitar-led instrumental creating a perfect balance with Jon’s thundering bass underlying the structure. Seeing the guys bashing it out live reveals its complexity, ably enhanced by fifth member Steve Rispin’s engineering skills at the sound desk.

Chasing Rainbows followed, after which a heartfelt thanks from JY to the assembled for supporting Lifesigns and other lesser-known bands served as an introduction to the brand new track, Gregarious. A lovely lilting melodic break between the marching verses and at its conclusion plus another impressive guitar solo boded well for the quality of the writing on the, as then, forthcoming album.

Some timely virus-based banter, highlighting the potential for hospital radio becoming the new main publicity vehicle, cheekily heralded At the End of the World; always a crowd pleaser, with its clap-along bit and the most ironically joyous sing–a-long ending in rock.

The formidable N was introduced by Dave explaining the requirement for therapy in order to learn how to play it, and then to actually play it, evidenced by him proceeding to play keys and guitar simultaneously! Full of glorious riffs, this piece showed off JP’s harmonies as well as the whole caboodle of atmospheric swirly keys and effects, and JP going physically bonkers alongside Dave’s mesmerising guitar!

The Last One Home was the encore of sorts, as there was no real need for the band to commit to the formalities of leaving and immediately returning to the stage, particularly as time was getting on. This song, as always, had the audience transfixed, captivated by the simple beauty of the main forlorn melody, as sung by John, the unexpected uplifting key change, and with Dave’s stunning guitar solo which transforms the song into a powerful conclusion to an overall wonderful evening, underscored with much contemplation as to what was to come for us, band and audience alike.