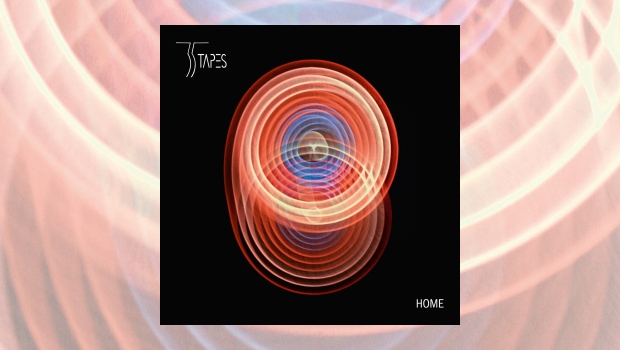 It has only been in the last few years that I have discovered the talents of Scandinavian, and in particular Norwegian, progressive rock bands. Where have I been all my life? So imagine my delight when Prog Magazine introduced me to 35 Tapes nearly two years ago, with a review of their debut album, Lost And Found, that described them as “like Genesis, Camel, Marillion, and Talk Talk, merged with Airbag, Oak and even A-ha!”. Who could possibly resist, and once I had heard their 19-minute track Mushrooms on the accompanying free CD, 35 Tapes had acquired a new fan. Well done to all concerned, as my wallet flew open again to acquire the vinyl all the way from Apollon Records in Bergen.

The core of the band comprises multi-instrumentalists Morten Lund and Jarle Wangen, with Bjørn Stokkeland on drums. When they play live, such is the multi-layered nature of their music, they bring in guest musicians to create the truly live experience, rather than relying on backing track infills. The band admit that their music is inspired by progressive rock from the seventies and they aspire to “recreate some of the good feelings this music gave us at that time.” Happy memories of the symphonic, melodic, pastoral prog, peppered with 12-string guitars, Mellotron (possibly responsible for the band name due to the 35 tape reels contained therein), the beat from tight drums and reassuring vocals. And yet their music is most definitely 21st Century with an unmistakably Norwegian sound.

So, here we have album No.2, entitled Home, recorded during the world’s enforced isolation caused by the 2020 Covid-19 pandemic. No doubt, they would otherwise have been out on the road, but we are instead treated to a further development of their compositional skill. And what a treat it has turned out to be. Six tracks that conform with the traditional seventies album length of circa 45 minutes, encourages you by giving you time to listen to it from start to finish. I sometimes wonder whether bands that routinely produce 70-minute epics lose some of their audience or cause them to dip in and out of the album. Not so here; this one is perfect in length and the track order has clearly been carefully considered. Old-school standards, me thinks.

So, what of the music itself? It’s always difficult to follow up a debut album that builds upon that initial success but, having listened to this a few times (yes, from start to finish), they have achieved exactly that. It is steady, mellow, reminiscent of dark Norwegian nights and, occasionally, an underlying angst, very ‘Scandi-noir’. The first track, Undertows, has an engaging forceful beat to start, followed by Mellotron, which brings Genesis’ Watcher of the Skies to mind. Signature guitar and vocals, almost Gilmour-esque in the higher register, confirm this is unmistakably 35 Tapes. 12-string guitar sounds have an Anthony Phillips quality; this would not be amiss on his Geese and the Ghost album.

Wave has another Anthony Phillips start, with mellifluous keys. It’s a happy song with synth and piano at regular intervals, smooth guitars, an energetic ‘Part 3’ and a glorious ending with a distinct flavour of Camel, from the Breathless era. Side One finishes with Well, a slow introduction conjuring a picture of the rising of the Sun in those northern Scandinavian territories. It gathers steam with acoustic guitars, followed by a steady bass and drum beat, vocals that have a likeness to Andy Latimer, an increased drum tempo and soaring guitar solo before breaking into a somewhat discordant section of typically challenging prog time-signatures. For those vinyl aficionados, you are definitely motivated to flip to Side 2 to see what comes next.

Onward is perhaps my least favourite track. Don’t get me wrong, it’s not that I dislike it, but it seems to me to be rather unremarkable… until the Mellotron takes centre stage along with another signature guitar solo. There on in, immediate reactions are of excitement and wondering where this is going to go, and I suspect this will grow on me with repeated listens. This moves seamlessly into Walk with an almost King Crimson introductory beat/melody and instrumentals redolent of the Genesis Trespass era. We have to wait well over two minutes before the vocals start. Then, with imaginary lighters held aloft, the track progresses steadily with an almost folky melody. Remember those heady days from the ’80s before the invention of mobile phones, particularly at European gigs?

The album ends with Epilogue and indeed it is; a perfect end and my favourite of the album. It was forever thus that musicians look for the killer track to close out their work, or at least a track that pulls together all the things that they have set out to achieve. This track has everything on it from the 35 Tapes box of tricks. A snare drum introduction with mellow guitar/bass and tender vocals. Turn the lights down and appreciate what they have achieved; it’s almost Late Lounge. The middle section is intriguing and it is difficult to establish whether the sound is keys or guitar with an interesting pedal effect. It doesn’t matter because it’s glorious, with overtones of late ’70s Camel. It finishes with an urgency that fans of Porcupine Tree will enjoy, before closing with the most delicate piano and guitar work that will have their audience singing when we get to hear this live. “Wake me up before it’s over”… It’s beautiful and hugely satisfying.

I am very impressed with this second outing by 35 Tapes. It is true to the band’s objectives of capturing the intent of the seventies, whilst bringing it into the modern era. I had it described to me that they are the musical equivalent of a Munch painting, or perhaps an Ibsen play. For those that consume TV boxsets, the snowy landscapes and darkness of Fortitude would not be amiss, but with a combination of moody darkness and uplifting light. They are a band to watch and I recommend them strongly. Go on, do yourself a favour and get this album. Whilst you’re about it, slip the debut album Lost and Found into your basket. You won’t be disappointed.