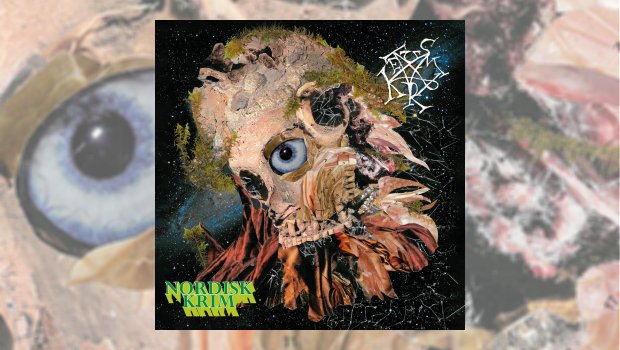 Yet another Norwegian band I’d not heard of until recently, Tusmørke (‘Twilight’) have been in existence since 1994. Trawling through their releases in recent years, they prove themselves very difficult to pin down to a genre. They seem to do as they please, from recording prog epics about the bubonic plague, to albums of Norwegian children’s folk songs, and mostly sung in their native language. With upcoming double concept set Nordisk Krim (‘Nordic Crime’) they have fulfilled something of an ambition by writing an album about the bog bodies of Denmark. In a move which may gain them more international attention, much of this new opus is sung in English, and this does help with accessibility for a non-linguist like me. Don’t get me wrong though, much of the album is weird and impenetrable, so a prog fan’s delight.

Although the band tackle some fairly macabre subject matter, treating it with a respectful reverence and sense of drama, they also have an absurdist streak which surfaces from time to time, keeping the atmosphere from getting too serious. The musical palette is an odd mix of influences, including the spacey synth burbling and bass drive of Hawkwind, the psychedelia of Gong and Amon Duul II and the Gothic drama of Van der Graaf Generator. There’s also a quantity of folky Tull flute adding a lighter side. This audio concoction works remarkably well, and although all these influences are from the ’70s, that’s all the rage right now, what with Ring Van Moebius and Wobbler keeping the market in second hand Hammond organs afloat, and now Tusmørke can be added to that roster.

So why a concept album about bog bodies? Well it seems that, as children, the band members were taken on a school trip over to Denmark to the museum in Silkeborg and were struck by seeing the preserved bodies which had been found in the peat bogs of Jutland and elsewhere. The remarkably well-preserved specimens often had orange hair still intact, and the impression made was such that it seemed inevitable that the subject would be explored in musical form once they formed a band. Quite why they waited until 2020 to make the record is unclear, but here it is, and it’s a wonderful artefact, if a bit mad.

The album title is a reference to the fact that when these bodies began to be uncovered in the Eighteenth and Nineteenth Centuries, they were found to have been ritually murdered and it was thought that they were relatively recent crimes. In fact, because of the properties of the peat, the bodies had been preserved for centuries, the oldest believed to date back to 8,000 BC. Current thinking seems to be that they were sacrificial victims, perhaps willing, and Tusmørke have made an album celebrating these mysterious souls.

So we begin in light and whimsical fashion as we Ride The Whimbrel across the wetlands to reach the peat bogs, dancing flute leading us on before being presented with the maniacal Age of Iron Man. Fear not, this is not a Sabbath tribute, after all, there are few guitars – if any – on the album, but it is an absurdly energetic psychedelic romp, and whilst not at all representative, it’s a fun interlude; just watch the video, it’s hilarious.

Flute and violin compete to finish the song first as it bounces along at pace while the mad vocals speak of excavating ancient bodies from the peat. Mumia follows at a more sensible speed, the chorus seemingly attempting to invoke the spirits of the dead in a style that sounds like Arthur Brown, and in fact that’s not a bad comparison either, come to think of it! By now, the instruments are sorting out a pecking order, and it’s keyboards which define the sound, the Hammond in particular which is played by Haugebonden Gode Gullstein, very much in a Hugh Banton style, being dominant. Krizla’s flute acts like the lead guitar, and is the other dominant force in Tusmørke’s sonic arsenal. Behind all this is the driving bass of Benediktator, and lively drumming from HlewagastiR. There’s further embellishment by Åsa Ree on violin, and of course the story is sung by Benediktator and Krizla.

Cauldron Bog continues the quest to understand these ancient rites in a swirling dance of death, a psychedelic dervish punctuated with backing vocal interjections sounding like the Mothers of Invention, the track closing with a gush of bubbling mud sound effects. There follows an instrumental interlude, Dogs Flesh, which is somewhat repetitive, but I am guessing represents a ‘nightmare sequence’ of the kind of rituals which culminated in the death of the chosen ones. This is trippy weird stuff which I love, but might not appeal universally!

Moss Goddess, the first of the lengthier pieces, follows, and we are deep in Gothic Van der Graaf territory, with a doom-laden atmosphere, and there’s Hugh Banton again, I swear. The vocals are half sung, half spoken, intoned like an incantation summoning the swamp spirits:

All the most famous of the known bog bodies are named in turn in a deliberate act of remembrance, which is strangely moving.

Black Incubation has a more Tull sound, the various changing melodies carried by Krizla’s flute in a Nordic folk jig, but with an underlying menace suggested by the keys and electronic effects. Then two Norwegian songs, which despite not being readily followable lyrically, are haunting and memorable. Et Moselik (‘And Beyond’) has a folky construction, but in a sombre tone, whilst Heksejakt (‘Witch Hunt’) is similar but more upbeat and demented, with off-kilter fiddle and treated vocals. These short songs set the scene for the final epic, Mysteries of Sacrifice. At nearly eighteen minutes, I suppose it is a little indulgent, but to be honest, I find it seems much shorter and justifies its length easily. It is a suitably macabre concluding piece of epic songcraft, fitting for such a mysterious and enthralling subject. The band allow themselves a bit more space to develop the piece and room to improvise around the unfolding themes, which naturally evolve to a thrilling and satisfying conclusion.

Admittedly, since the whole album is around 82-minutes long, a little judicious pruning could have resulted in fitting the whole onto one CD rather than two, but I rather admire their insistence on sticking to their artistic guns and releasing the complete thing uncut. The whole idea of this project has an air of madness about it, their approach is uncompromising, and I salute that.

In conclusion, after cursory inspection and wondering if I really wanted to listen to the whole album at all, I can now say in all honesty that I’m very glad I did, and have played it right through many times. It has an integrity and sincerity which is admirable, and was a subject which clearly inspired the band to new heights. It takes a very seventies musical palette and uses it to great effect despite the obvious influences, and manages to sound different enough to have relevance. It’s without doubt their finest achievement to date, and I do hope it finds them the wider audience I believe they deserve.