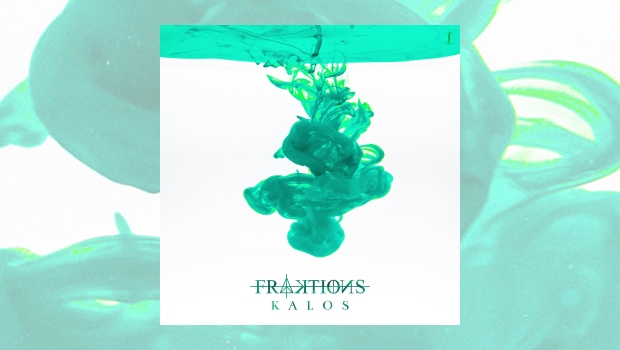 I was introduced to UK five-piece prog metal band FRAKTIONS with their 2016 EP, Anguish. Iâ€™ve always been attracted to musical releases which deal with mental health in a realistic and sympathetic way. The musical styles FRAKTIONS played with allowed them to depict, as they put it, â€śthe final chapter of a schizophrenic womanâ€™s lifeâ€ť in music, incredibly vividly and effectively – and also sadly, as the EP leads to her suicide. In December the following year, the band released Aftermath, â€śa new single to close this chapter of the band as a progressive metal quintet.â€ť Given there has been no sign of life since then (that I saw, anyway), I guess I assumed FRAKTIONS were no more. But the band are back. No longer a quintet, but a trio. The two members who are no longer present are the two guitarists, so before hearing a note, itâ€™s clear that 2021â€™s Kalos EP is going to have a different sound.

So where do you go when you lose the twin guitar attack of your prog metal band? The sound of FRAKTIONS that I knew was closest in sound, I guess, to New Zealandâ€™s Look to Windward (particularly their debut album, Fortuneâ€™s Haze). That might not be particularly helpful as Iâ€™m not sure many people will be familiar with that band. Perhaps SikTH? FRAKTIONS didnâ€™t really sound like SikTH, but itâ€™s the closest I can come to giving some idea of what they did sound like. On Anguish, the track Sanctuary provided â€śa rare moment of tranquillityâ€ť – at least for its first two minutes – and I guess thatâ€™s as close as FRAKTIONS came to foreshadowing the new sound on Kalos. With no guitars, the trio is now led by keyboards. Theyâ€™ve also gone fully instrumental. The band claim to be staying true to their prog metal roots, and the music is heavy in parts, but the album is actually quite reminiscent of nu-jazz bands such as GoGo Penguin (which is fine with me).

Opening track Euphoria sets the stall with a really pretty keyboard melody, subtle percussion, and electronic noises that remind me of a mobile phone on vibrate, before we begin to be blasted periodically by slashes of bass and drums. What seems to be the final blast is actually the opening notes of Polynya. This is a symptom of what is my only criticism of the EP. It is simply too short, and the compositions donâ€™t get a chance to develop. I love what I hear, but I want to hear more. In the past, I felt FRAKTIONS were making the right choice in making EPs, as they said all they needed to say in just the right amount of time. While I guess the band have used Euphoria as an extended introduction to Polynya, it still feels a little incomplete, and like something more could have been done with it. It almost sounds to me as if the band have kept it short and concise, in order to keep to the expected timeframe of an EP. But I donâ€™t want to come across too negatively, because I do really like Euphoria, and it is incredibly effective the way it bleeds into Polynya. The first 40 seconds or so of Polynya could conceivably belong to either track, and thatâ€™s quite clever, really.

‘Clever’ is possibly the best adjective for the EP as a whole, too. Not too clever, for that would be a criticism, but I do love the way FRAKTIONS have structured the EP, even if I could have done with it being a little longer. I love the way everything else leaves the mix but the trill of the piano at the end of Polynya, so that although this track is separate from the following Devotion it still naturally flows into it, as Devotion begins only with piano, before the other instruments join in. This was the lead single for the album, and would surely have come as a great surprise for anyone familiar with the band, but unaware of the new musical direction. Itâ€™s got the niftiest bass work on the album, with the bass and piano almost trading licks. The drumming is tight, and the way the bass plays a role in between the piano and drums is very cool. There is no rhythm section to speak of, after all, both the piano and drums are percussive instruments, and the bass seems to move freely between accompanying one or the other. All three members of the band are in each otherâ€™s pockets. They clearly know exactly how they each play, and how to play to and with them.

Equinox is the closest to a â€śstraightâ€ť jazz sound as youâ€™re going to find. Although it is still punctuated with some heavier moments, they arenâ€™t really heavy in a metal sense. I suspect this is the track that might give fans of the old sound the most trouble, but itâ€™s possibly my favourite track. Itâ€™s quite beautiful. The beauty continues with Deluge, which definitely begins with a sound reminiscent of rain, but hardly a deluge. It has a lovely watery quality though, and again as much as the piece is keyboard-led, itâ€™s the bass that really tickles my fancy. Thatâ€™s not because itâ€™s better, so much as I always tend to focus on the bass in anything I listen to. Always have, and probably always will. But all three members of FRAKTIONS are worthy of your attention, and I can highly recommend this EP. Itâ€™s not what I was expecting at all, but actually itâ€™s better than anything I could possibly have hoped for. Maybe make a full album next time, though?