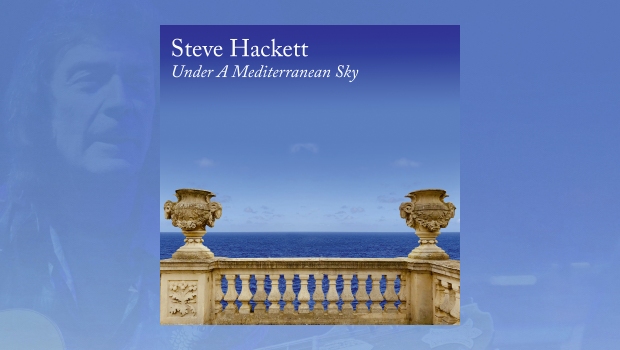 Steve Hackett – Under A Mediterranean Sky

After the worst year in living memory, here we are back in lockdown and holidays are becoming a dim and distant memory. While there is no imminent prospect of foreign travel (5 miles is frowned upon in some quarters!) Steve Hackett’s new album Under A Mediterranean Sky is the perfect antidote to brighten your day and whet the appetite for better times to come.

With this album Steve Hackett, Genesis’s guitarist through their classic period in the 1970s, paints such wonderful and vivid images of the wide and varied cultures and landscapes of the Mediterranean region, one has the feeling of being on a whistle-stop cruise!

“I think you’re right,” Steve agreed when we spoke recently, “and, because we can’t really travel substantially and safely at the moment, I hope this album will take people on that journey. It’s the quickest way to travel, in the mind, and it celebrates the Mediterranean which is just a beautiful area. Whether you sit down and listen to it or whether you drift off with a glass of wine…”

That would be very easy, me thinks.

“Well, I think it goes with that, really,” he laughs. “I’m very happy to do that! This sort of music, whenever we have friends round, always seems to go down well as a background to things. You don’t have to play it at vast quantities of volume, it works when it’s gentle.

“The Mediterranean is special because it connects lots of disparate cultures from the Europeans to the Arabic. We’ve had lots of extraordinary visits and it gave me a chance to look at classical roots of music and the flamenco aspect of ethnic music.” 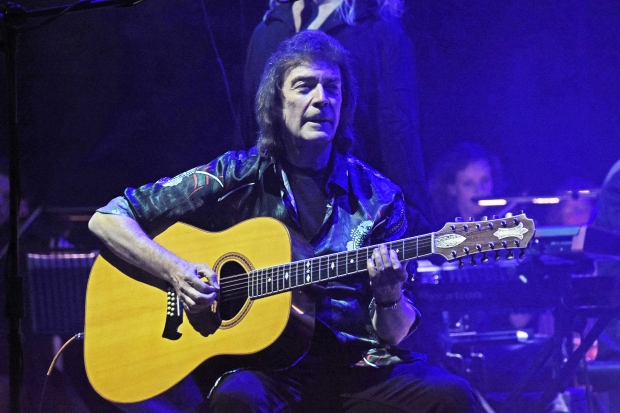 Following his departure from Genesis in 1978, Steve released a string of critically acclaimed albums. While most of his albums fall into the rock category, Under A Mediterranean Sky is Steve’s sixth classical/acoustic guitar album and his first acoustic outing since Tribute in 2008. It is a project Steve has had in mind for a while but, when his American tour was cut short last March by the accelerating global pandemic, he returned home without his electric guitars. They arrived later and were quarantined, leaving Steve at home with just his nylon-stringed acoustic guitar.

“I fell in love with the sound of nylon guitar from the first note that I heard Segovia play,” Steve says. “It is a completely different sound and, within the compass of what the nylon string guitar can do, there are a lot of different tones. You can do the full-on attack, the kind of salvos that you expect from the flamenco players but it can also be very gentle, gentle as a harp, and it conjures a number of different tones. It’s shades of black and white but, if you love it, that’s what it does for you. The idea that all that was even possible on one guitar seemed like a miracle.”

As he explains, the first lockdown was just the opportunity Steve needed to focus on the new acoustic project. “It made me concentrate solely on that for some time. I’d been putting in long hours, as I have over the course of a lifetime. It’s a mixture of thrill and frustration in equal measure as you always want to make it better and you’re dealing with your own limitations. Sometimes those limitations give way to surprising results. I didn’t rely entirely on technique and speed but it’s fairly nippy in places, so it’s not all laconic.

“When I first tried doing acoustic albums, like Bay Of Kings, I was thinking of music to accompany siestas, all the pieces were pretty slow. The last acoustic album I did was called Tribute, a tribute to lots of different composers, and I really had to work hard to be able to play those pieces. But, working with the speed of some of those pieces, I thought ‘Come on, now’, I had to make sure that speed must not be a limitation, I had to think like a composer. The great thing about classical composers is that great technique and speed is a foregone conclusion. They were my influences, if I could play it like a virtuoso then it gave a lot more possibilities. You could lay into it and gild it with speed but if you use enough chords it’s not just one more solo after another. There has to be a reason for it, to give it shape.

“Those records inch their way forward, bit by bit, and technique builds up, the imagination takes over and, over the years, it erodes the internal invalidator, thinking that ‘I can’t do that, I’ll never be able to play that well.’ When you work at it, bit by bit, despite yourself, I found that it led to areas that I’d previously rejected.

“When I started out I was a plectrum player on steel strings and I thought ‘The only way to do this is with two fingers, thumb and forefinger,’ and then, reluctantly, all the others come into use, even if it’s just to pick out chords. So many people have been my guitar teacher over the years. I’d be watching somebody on a street corner doing something, ‘That’s a good sound, that’s good.’ I never needed to have a guru, I just always picked up things that I saw other people do.”

Our journey around the Med begins on the island of Malta, in Mdina – The Walled City. It’s imposing strength is portrayed by Roger King’s dramatic orchestration while Steve’s guitar weaves through the atmospheric streets describing the creativity, love and strength that held Malta together between all the waves of conflict.

With Steve’s delicate guitar work, Adriatic Blue paints an enchanting view of stunning scenery as tall cliffs of forested mountains plunge into the deep blue sea along the Croatian coastline. Sirocco is altogether more atmospheric, inspired by the winds playing through the imposing structures of Egypt.

The lively Joie de Vivre expresses the unique sense of joy the French have through their wine, food and folk music, with paintings reflecting family gatherings, spectacular vistas and the vibrant colours of their cities. The art of dreaming is embodied in their sensual love of life.

“At first hand, I’ve marvelled at the mystical whirling Dervishes,” says Steve.  Along with otherworldly beings such as the Djin (Genie) they sprang from Persia’s dreaming past. The Dervish and The Djin captures the extraordinary atmosphere of this most exotic of civilisations with the help of (Steve’s touring band regular) Rob Townsend’s soprano sax, the tar of Malik Mansurov (from Azerbaijan) and Armenian Arsen Petrosyan’s duduk. “Of course, those countries are virtually at war with each other,” he adds, “and there has been something like a thousand casualties (at the time of speaking) on both sides. Again, it’s a case of music being able to do things that politicians fail to do, to do something constructive.”

The Memory of Myth embodies the deep and rich history of Greece and features the violin of Christine Townsend (no relation to Rob) while Lorato – ‘love’ in the language of the African Tswana tribe – is a pretty folk tune.  Love is the force that heals and links all disparate peoples of the Mediterranean.

Steve and his wife Jo were enchanted by the little Faun statue in the House of the Faun, Pompeii. “The villas there seemed to come back to life as we walked through those wonderful atriums and gardens,” inspiring Casa del Fauno and featuring the light and airy flute of Steve’s brother John.

The only non-original piece is Domenico Scarlatti’s Sonata. This embodies the Baroque music of Italy, a sensitive interpretation embellished with cross-string trills, a technique introduced to Steve by the fine classical guitarist, the late Theo Cheng.

Steve also expresses his admiration for the flamenco guitarists of Andalusia who are celebrated on Andalusian Heart. “One of the flamenco guitarists was showing me the extraordinary things they are able to do,” he explains. “Seeing the gypsies playing and dancing in caves there, you get the feeling that these people are dancing for their lives. I think that they are the best players in the world, the flamenco players.

”There’s a couple of videos with the album,” Steve adds. “Some of it was shot while we were away, they’re very much travelogues, in a way. It’s a chance to celebrate those things on film. It’s a mixture of things Jo shot – we originally met when she wanted me to do some film music for her. And then Paul Gosling has put stuff together as well. It’s interesting the way those videos have come out, really nice.”

Our journey comes to an end with The Call of the Sea, a gentle and peaceful reflection of the vast body of water that unites these many civilisations, both ancient and modern.

“I had a great time doing this album,” Steve reflects, “seeing it take shape, and I’m very pleased with the outcome and very proud of it. When I work on rock stuff, I often wish I could get that degree of subtlety into it.”