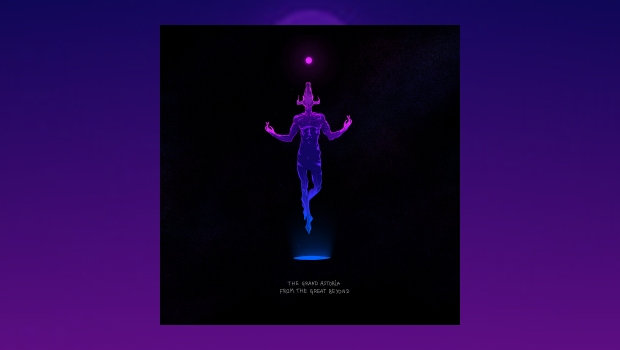 The Grand Astoria – From The Great Beyond

Whoa! I can’t believe I’ve gone all this time without being aware of the wonder of Russian band The Grand Astoria, a band that has put out a dizzying array of singles, EPs and albums since 2009, with their own unique take on many different musical sounds and styles – even a song sung in Kobaïan, and a series of (literally) solo pieces inspired by Roscoe Mitchell. The band seems to have a revolving carousel of members, with the only constant being the musical mastermind Kamille Sharapodinov. The only other long-standing members I can discern are Igor Suvorov and Danila Danilov. Of particular interest to some, I’m sure, will be the presence of Gleb Kolyadin (of iamthemorning) on this release. I would love to get inside Kamille’s mind and see what makes it tick, but in the meantime, listening to The Grand Astoria will do very nicely. I’m slowly working my way through their discography, after being introduced to the band by From the Great Beyond.

So what do The Grand Astoria sound like? Well, based on what I’ve listened to so far, there’s very little consistency in their sound at all – and that is no criticism. Indeed, to the contrary, I love not knowing what to expect next from the band. There’s not yet been an unpleasant surprise. I guess you could call the band psychedelic, as psychedelia does seem to pervade the great majority of their work – but very rarely in the same guise. The journeys may be similar, but every trip is different. From The Great Beyond was potentially a good starting point for me as it definitely eased me into their world of weirdness.

The opening title track welcomed me to their home, and continues to do so. It’s almost a spacey prog version of Violent Femmes, with its vocal and percussive acrobatics and sparse minimal feel. The clean sound disappears in a wave of fuzz as Wasteland follows. The percussion is heavier and darker, the chanting hypnotic and shamanic. Waves of Tangerine and Pink float over the rhythmic barrage, and now there’s the galloping riffy intro to Njanatiloka, like a psychedelic Iron Maiden, before erupting into something more like Black Sabbath, and that’s just the beginning. It jumps all over the place over its ten or so minutes and is easily my favourite track here. However, while I’m mentioning names, realistically The Grand Astoria doesn’t really sound like any of these. It’s just an attempt to show how nimbly the band leaps from one sound to another. So let’s add some more. How about Queen and Chrome Hoof?


Like many Russian bands I’ve encountered, The Grand Astoria seem to draw influences from the East as much as the West, which only adds to the eclecticism of their sound. I am kind of reminded of Faith No More or System Of A Down, not in sound, more in the way that the band so fluidly experiments with sound impulsively and indulgently, without it ever sounding overwrought or overindulgent. The way that they translate their experimental tendencies into something quite melodic, and verging upon mainstream despite very definitely coming from the fringes. The way that they subvert their instrumentation and approach their music from unexpected directions. Interestingly, I tend to be mentioning names that are not normally the ones that might come to mind as prog (though if you think they’re not progressive, I’m not sure what you’re hearing).

By the time Anyhow hits with its unlikely jazz-cum-bluegrass fusion, if you’re not ready to expect the unexpected and expect to enjoy it, then The Grand Astoria is not the band for you. Again, I have to reiterate how well they play with the various styles, so no matter how disparate they might seem, they never feel disjointed. The Grand Astoria takes their listeners on a series of ambitious adventures to the Great Beyond, but for sure always returns them and welcomes them back home. The band manages to pack a lot of punch into any track, no matter the length, and not one of the longer tracks ever feels too long. This is perhaps unsurprising when you consider the wonderful The Mighty Few album which comprised only two tracks in its fifty minute duration – both of which are incredible in their pacing and structure, revealing many intricacies and leaving no room for attention to wander.

The track lengths may be considerably shorter on From The Great Beyond (it is an EP, after all), but the multitude of ever-changing sounds and textures are still present – and still not one ever feels extraneous or forced. Listening to The Grand Astoria from their beginnings really reveals how far the band has travelled to reach this point. While I don’t think I could ever call them a stereotypical stoner band, their debut does reveal the band started out closer to those desert (or perhaps tundra) horizons. But the depth and breadth they have traversed since is quite astounding. A lot of the heavier moments still lean towards doom (and there’s nothing wrong with that), but some of their composition is almost classical in nature, and this interplays with improvisation (or, at least, a lot of the music sounds joyfully spontaneous). They flirt with jazz, blues and funk, the only constant is the psychedelia – which, as I pointed out earlier, does not present itself in the same way, meaning even the only constant is not particularly constant.

It’s possibly worth stating that while the band call From The Great Beyond an EP (because they believe it not long enough to call an album, in the context of their discography), their label (Addicted/No Name), considers it a full length album. Personally, I don’t really care, so long as the music is good, and damn, this is good music. The only difference it would really make to me at this point of the year is that as much as I love it, I might struggle to find room for it in my list of favourite albums of 2020. However, if I call it an EP, it’s a sure fire contender for the top spot. Whatever you want to call it, this is a fantastic release that is worthy of your attention. It almost passed me by – don’t let it pass you by!