Come hither as – forsooth! – here be a new and contemporaneous collection of long-since unheard sounds from ye olde and venerable Gryphon!

And Gadzooks, ’tis worth a groat or two of your hard-earned!

Known for their generally acoustic sound, taking in medieval and Renaissance styles, Gryphon flourished in the 1970s, moving in a more progressive direction as they developed until splitting in 1977 after five albums.

And that was that.

But wait! After a tentative toe back in the pond in 2009, they finally re-emerged in 2015, the release of ReInvention in 2018 marking the end of a 41-year drought of new material. And if that wasn’t unexpected enough, we now have the second instalment of reformation fayre, in the shape of Get Out of My Father’s Car!, the unusual title arising from a comedic – and fondly remembered – band argument in 1972, shortly after they came together. The title track leads us off, a surprisingly groovy thing built of bass and a funky guitar riff, alternating with quintessential flourishes of brass and woodwind, violin tones also making their presence felt. It moves from stomp to fly with ease, and there aren’t many bands that could pull off such an esoteric track with such glinting enthusiasm. Quirky and fun, it’s more direct than Gryphon often got in their formative years, but with shouted group vocal and delicious instrumental breaks it’s a great rocking opener.

With three original members still aboard – Brian Gulland, Dave Oberlé and Graeme Taylor – there is an authentic feel which doesn’t simply revisit old ground in a lacklustre ‘later years’ fashion. No, they go at it with quite some vim and vigour, impressively so for a band approaching their fiftieth anniversary. It’s pleasingly gentle at times but the dextrous instrumentation is mightily impressive throughout.

A Bit of Music By Me is one such gentle interlude, written by wind player Andy Findon’s brother, Gary, who died in 1969. Recently rediscovered, it moves from lilting flute intro into a lovely ensemble piece with developing cyclical urgency. Light and airy, it’s beautifully played with wonderful interactions between bassoon, flute and violin, before slowing to an elegant conclusion. Gary also provided the basis for Suite for ’68, lugubrious bassoon, twee violin and harpsichord dancing a woozy waltz with crumhorn and a Renaissance-vibe colouring the majestic central section. This is the kind of thing that Gryphon have always done supremely well, and this is no exception.

Harpsichord steps into focus for the baroque instrumental Percy the Defective Perspective Detective, its stately tones surrounded by sprightly woodwinds and violin. A folk lilt is brought in with Christina’s Song, Clare Taylor’s setting for a work by 19th Century romantic poet Christina Rossetti. Clare’s voice adds a new texture, beautifully self-harmonised in the final verse, and again the dexterity of the instrumentation, with spiralling flute, is hugely engaging. She also contributes A Stranger Kiss, delicate and sombre with a hint of Thieves’ Kitchen about it.

There’s humour in Graeme Taylor’s The Brief History of a Bassoon, based on Indian banyan and Brian Gulland’s aged assertion that he used to think he was a tree. Graeme’s vocal is rich and warm in an excellent arrangement with some lovely harmonies. Completely in context, it sounds like Gryphon should. The tone changes with Rob Levy’s mournful Fourth Sahara, violin taking the lead, giving way to flute and then bassoon as the delicate balance between the various textures holds strong. Lovely stuff, it takes on a relaxed feel, moving into the punsome Krum Dancing compendium of four distinct Tudor-style dance tunes, upbeat and thoroughly jovial with a rock edge successfully creeping in.

The final pairing take in the groovy and the sad. The Charlie Brown piano stylings and ‘Bonnie bonnie banks’ guitar feel of the bizarre Normal Wisdom from the Swamp… (a sonic tonic) moves enthusiastically through a number of phases – Gawd knows what it’s about though! Finally, a stately and heart-felt Parting Shot, Graeme’s beautiful and melancholic ode to his wife, complete with emotional guitar solo and more exquisite harmonies. A fitting end to what has been a thoroughly enjoyable listen.

I came to Gryphon many years ago, drawn in by the baroque elements and unusual instrumentation of their first three albums. For now unknown reasons, I hadn’t heard ReInvention, a lapse now rectified, and based on the evidence presented there and in this new release, Gryphon are in a rich vein of form and clearly having a great time bringing their unique brand of music back into the world. I will definitely be in the audience as and when the opportunity eventually comes around again.

This album makes me smile. Anyone who has ever loved what Gryphon do will get a lot out of it. This band is unique, one to be cherished, and we’re lucky to still have them around. Get the Japanese version for a bonus Lament, from the band’s third album, 1974’s Red Queen to Gryphon Three, recorded live at the Union Chapel in 2016. 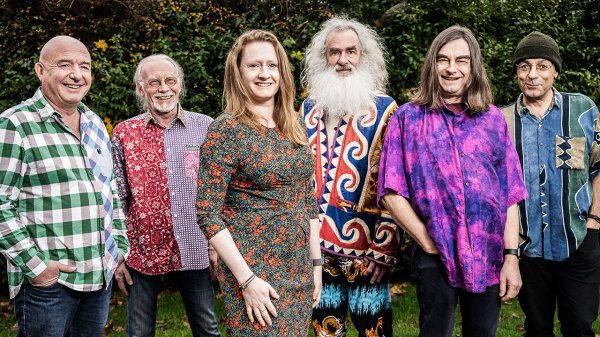