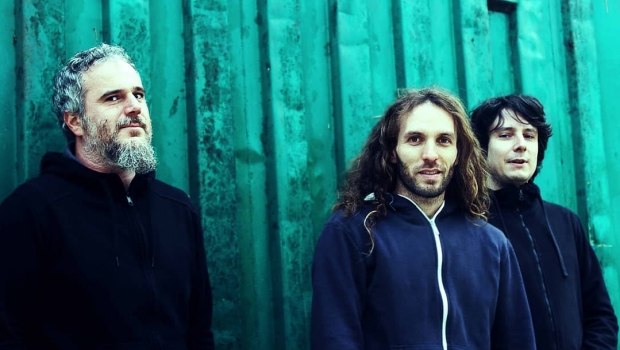 With the third album from these Italian purveyors of “Brassmetal”, DoomooD due for release in September, TPA’s Nick Hudson spoke to Ottone Pesante about their history, outlook, music… featuring a line-up consisting of trumpet, trombone and drums…

To get things out of the way, I admit I’d never heard of you guys before this year, and was introduced to you by way of Postvorta’s Porrima and Void of Sleep’s Metaphora. It seems like the city of Ravenna has a really healthy and friendly scene. Are you all friendly with each other, or does it only seem that way?

Yes, in the area near Ravenna there are a lot of great bands and we all like to collaborate and play together when it’s possible. We play brass instruments so it’s not so strange that bands ask us to collaborate in some songs or projects ‘cause we’ve that kind of sound.

From the outside, Riccardo Pasini seems really influential within the Ravenna scene. Is that accurate?

Riccardo Pasini (aka il Paso) is a great guy and really influential especially within the Ravenna scene, but even more. It was very inspiring to work with him on that record: there are no limits to your ideas when you work with him and he’s always in a good mood with great ideas. I can just say that he’s the first guy who let us use amps to record the distorted lines of trumpet and trombone.

DoomooD’s release was delayed due to COVID-19. Obviously Italy was hit hard by the virus (though the UK has subsequently been hit even harder). So while I looked forward to the release of DoomooD, I acquainted myself with your two previous releases. DoomooD is something quite different, and I think it’s easily the best thing you’ve done so far. It far exceeded any expectations I had, and I love the new direction you’ve taken.

Thank you! …and yes, you’re right! It was time to slow down and experiment more with the effects in order to find a very dark and heavy sound. We had the idea to do this kind of record since the beginning of OP, and now it was the right time. This gave us the opportunity to focus more on one genre, add some black metal flavour and some drone parts.

There was definite foreshadowing of the new sound in the final track of second album Apocalips. Apart from its title, it seems to share several motifs utilised within DoomooD. Was DoommooD a deliberate reference of what was to come?

The title came from the previous album but it’s not strange for us; usually when we finish a record we know (more or less) where we’ll go next, it’s a trick we like and keeps our minds focused on the project.

DoommooD is my absolute favourite track from Apocalips, and it’s also the longest by a considerable margin. I guess I was expecting more lengthy and expansive tunes like this on DoomooD. In comparison, DoomooD feels like a very short album. It’s not dramatically shorter than Apocalips, but it feels a lot shorter. It’s a very concise album, that feels over too soon. It’s not really a complaint but, man, I could have kept listening for a great deal longer! Did you ever consider a longer release?

Honestly, sometimes we also feel that we should have kept some parts longer, but there is no particular reason for the length, it just came out like this. The whole album has been composed like just one unique song and probably that’s the reason. What we had to say with DoomooD we think it’s very clear and gives you the taste to ask yourself what will be next…

I love how dark and heavy, and just damn doom-laden, DoomooD is. You’d think an album entitled Apocalips would be the pinnacle of heaviness, but DoomooD blows it out the water. It’s less wild and frantic, but somehow the slower pace of doom metal creates a far more overpowering and overwhelming sense of drama and dread. It’s like you’ve approached the album in a whole new way?

Yes it is! We were searching for this heavy sound since the first EP, but we weren’t able to find it until we started working with Riccardo Pasini. Apocalips was an album built to play live and we recorded it like this: “1-2-3-4 play”, all 3 in the studio and that’s all. With DoomooD we had a different process, Francesco [Bucci – trombone] wrote the composition, Paolo [Raineri – trumpet] did like a sort of pre-production to understand better what kind of arrangement was the best and what kind of sound we need to have and then Beppe [Mondini] added the drums. Then slowly it became clear to us what kind of album we had and we went forward to it. It’s the first time we approach an album in that way and maybe that’s another reason why DoomooD is very distant from our previous releases.

So distant that, unlike Apocalips, sometimes it’s almost possible to forget that the main instruments are brass. There seem a lot more effects!

For the brass we had the idea to push more the effects, trying new solutions and experimenting a lot to see how heavy our instruments can go. Maybe you can’t recognise that it’s brass but if you listen carefully you hear it.

Oh, there’s definitely no mistaking they are brass instruments still. But there’s less of an awareness that they are brass, if you know what I mean. I think it’s because the brass is less outrageously brass-like, as it was on previous releases. And it’s not just the brass. Beppe Mondini’s drumming is dialled back, too, but somehow less is more. The drumming sounds more intense, even though there are far less blast beats and extreme metal fills. The brass, too. The restraint with which the band plays on DoomooD evokes a lot more tension than when everything is just let out, as it was on previous albums. Is it harder to play with that restraint? Listening to Apocalips, for example, sounds like it would be an absolute blast to play live. It’s easy to imagine you guys having the time of your life playing out of your skins. Will DoomooD have the same energy on stage?

Cannot say it’s harder to play, it’s just different, but funny as well. Unfortunately we had not the opportunity yet to play it live but we think it’ll be like hell when we’ll hit the stage again.

Apart from one song on Apocalips, The Fifth Trumpet, you’ve not really featured vocals before. Travis Ryan (as much as I dislike his vocals) worked well on Apocalips, and it’s easy to see how you might choose Silvio Sassi this time around. But Sara Bianchin is an amazing addition to your sound! How did that come about?

When we listened to the homemade pre-production, it was clear we needed some guests, and in particular on the song Tentacles we were wondering about a female voice. We’ve known Sara for a few years and we played with [her band] Messa a few times, so why not ask her? Her performance was stunning and left us speechless! We wanted also some screaming and growl vocals and our friend Silvio was perfect: he just came in the studio, recorded a few tracks and it was just great!

Sara’s vocals are a real highlight of the album. I don’t think I’d ever want to hear an Ottone Pesante album where all the tracks had vocals, but the addition of vocalists definitely adds a different flavour to the mix. Would you consider a greater number of vocals over your music for a future release?

For a few years we’re thinking to have more vocals on our music. For now it has been just an experiment, but can be in the future we’ll decide to do an album or something different with vocals, we’ll see.

If not the vocals, one thing different about this album is the structure. The album title is obviously a palindrome, so I was looking to see if any of the tracks worked as a palindrome. I think it’s more likely the album as a whole that’s the palindrome, but I’m not really sure if I’m hearing it. Am I missing something, or am I trying to listen for something that isn’t really there?

You’re right: it’s the entire album that is a palindrome. If you listen to it in reverse, you’ll be able to recognise the same riffs in the same order. This rule regards trumpet and trombone lines, sometimes both or sometimes just one at a time. For example, the first riff of the intro is exactly the same of the outro, but in reverse. Grave is the song where the melodies turns in reverse.

That makes a lot of sense, especially that it turns in Grave. Because what I did feel like I was hearing was that the album is less a palindrome, than a helix (as suggested by the track, Endless Spiral Helix). There is a sense for me that the album is spiralling in and around itself, with variations upon themes. Maybe I was closer to hearing the palindrome than I thought?

Probably the palindrome composition and the fact that the different themes are often similar, give that sense of spiral that you’ve heard. And that’s great!

All three of your albums have differed in sound, and as aforementioned Apocalips gave us an idea of what was coming next. You’ve said you always know more or less where you’re going with the next album. With DoomooD being a palindrome, there’s no easy clue to what we might hear next, unlike Apocalips. Do you actually know where you want to go next, and are there any hints you can give?

Yes, of course we know where we want to go next, but we can’t say a word about it, ahah…

Well, I had to ask! Thank you for your time. It’s been a pleasure!

Thank you very much!!

You can read Nick’s review of DoomooD HERE] 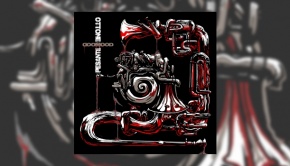