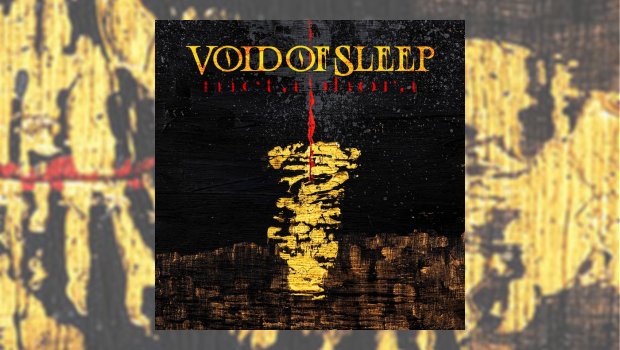 Italian band Void of Sleep chose to release their third album in late March this year, which was potentially a brave thing to do, considering the pandemic gripping the world and tightening the wallets of the music-buying public. I hope for their sake that the band has not lost sales by choosing not to delay the release, because this is easily their best album to date.

Metaphora opens with the delicate and beautiful acoustic instrumental track The Famine Years, reminiscent of similar pieces by Opeth, and indeed this will not be the only time I am reminded of that band. Void of Sleep may be a band based on classic sludge and doom tropes, but they have an indisputable progressive streak that takes them above many other bands that inhabit the genres. The following Iron Mouth is thus a collision of the progressive metal of Opeth and sludge of Mastodon, with maybe a touch of The Ocean or Intronaut too – though I mention all these bands only for an indication, as Void of Sleep don’t really sound like any of them.

Iron Mouth explodes into being after The Famine Years, providing lashings of primordial sludgey sounds, but this upbeat and bruising assault does not last. Through its eleven minute length, the song chops and changes, alternately attacking then caressing, held together largely by the drumming of Andrea ‘Allo’ Allodoli, ensuring an impressive continuity. There are no end of bands which balance heavy and melodic music, but only a select few seem able to manage to weave them effortlessly and make them sound this natural. Opeth is obviously one, and Void of Sleep show with Iron Mouth, and throughout Metaphora, that they can also ebb and flow from bone-crushing heaviness to softer atmospheric and melodic passages.

Iron Mouth breaks up into ambient sounds towards its end, and these lead very nicely into instrumental number Waves of Discomfort. Contrarily, this track brings waves of comfort and stability, after the schizophrenic Iron Mouth. I suspect a lot of listeners may not appreciate the instrumentals either side of Iron Mouth, but for me they are each quite beautiful in themselves and bookend Iron Mouth wonderfully. As Waves of Discomfort begins to almost disintegrate in its last minute, it also provides a perfect introduction to the following Unfair Judgements, so you could call it a bridge, or an interlude, I guess – but it’s definitely no filler, and works well as an individual piece.

Unfair Judgements reminds me quite a bit of Ihsahn, though again, doesn’t really sound anything like his music. Once again, the most impressive aspect for me is the tight performance by the rhythm section of Andrea Burgio (bass) and Allo (drums). Their relaxed tempo gives an eerie calmness and levity to an otherwise overwhelmingly oppressive doom number. This is one of the most accessible and immediate songs on Metaphora, so it is easy to see why the band chose to release it as a single. The only slightly disappointing aspect of this song is its length, as it ends far too soon for me!

The ante is raised by Master Abuser, which is easily the heaviest track on the album, and the only track where the ratio of predominantly clean vocals to occasional harsh, is reversed. It’s a pounding and pummelling aural assault, and it’s amazing. There’s such a groove to this track. The following track, Modern Man, also has a groove, but it’s a mellow, psychedelic one, punctuated by blasts of distortion. Again it’s the rhythm section that really makes this track for me, and once again especially the drums of Allo. But I have to make mention of Andrea ‘Burdo’ Burdisso’a vocals too, as they really are given a lot of room to shine on this track. (They’ve been great throughout, and Burdo shows just how versatile he is on the seven songs of this album, but there’s often so much else going on, it’s easy to overlook what an accomplished singer he is.)

I know I have kept singling out the rhythm section throughout this review, and it is unfair really because the whole band are locked in tight with each other on every track, and each as integral to the overall sound as the other. So, I just have to add here that though I might be more attracted to the bass and drums, I know other listeners will love the guitars – and I have to say that the addition of Mohammed ‘Momo’ Ashraf on synths and keys adds a whole new level and dimension to the band’s sound. I have no doubt for some listeners, his contributions will be what they single out to be their favourite parts.

The album closes with the ten and a half minute Tides of the Mourning, and like the similar length Iron Mouth, Void of Sleep pack a lot into the song, and it’s a magnificent way to end the album in style. I could attempt to describe it, but I could never do it justice. Suffice to say that after all the twists and turns that Void of Sleep have provided up to this point, they still have some surprises left in their bag of tricks. There’s not a single track I don’t like, or which seems out of place. This is quite simply one of the most exciting albums I’ve encountered so far this year. If you’ve not heard of Void of Sleep before, make the effort to explore this album.