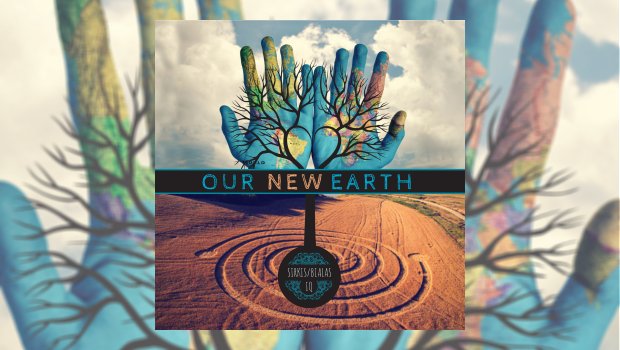 In 2016, in a church hall in downtown Stroud at Ian Fairholm’s beautifully curated Eppyfest, I had the pleasure of being introduced to the music of the Sirkis/Bialis International Quartet, featuring Israeli drummer Asaf Sirkis and Polish singer Sylwia Bialas. At the time I noted their set as being inspirational and emotional, and those words can certainly also be directed at this second album, released a few months before the end of 2019.

With all the music written and arranged by Sirkis and Bialas, the quartet’s jazz-based sound features influences from folk, progressive and world music, receiving praise from such luminaries as Bill Bruford, who provided the following for the liner notes of Our New Earth:

“European jazz is promised a virtually limitless future if it continues to stick close to its European roots embedded in the subsoil of specific regional cultures, and it continues to be performed by bands as imaginative as the SBIQ.”

It is most definitely a group effort with, alongside the principals, much praise due to the work of pianist/keyboardist Frank Harrison and bassist Kevin Glasgow. Sirkis’ ever-shifting off-kilter rhythms give an inquisitive drive while Bialas’ heavenly vocals sail effortlessly over the ensemble playing and vibrant soloing. Sylwia’s voice is simply wonderful, the power and range used to dynamic effect and a key element, often in her native Polish, swooping in and out of music which is given free rein to find its own levels. Asaf’s love of traditional Indian vocal percussion, Konnakol, is used to spellbinding effect during the title track and at the end of the closing Picture From a Polish Wood, adding to the unusual textures and tones deployed by the quartet. It moves from atmospheric to emotional to intense, and all points in between to produce a highly addictive hybrid that demands the listener’s attention.

The strident edge of the brilliantly named If Pegasus Had One Wing (He Would Fly In Spirals) sets out the stall with Harrison’s wonderful leading piano and skittering drums, Sylwia owning the vocal with an expressive and wide-ranging performance of the evocative and alluring Polish words expanded with dextrous textural voicings. Quiet and thoughtful, the intro to Land of Oblivion gives Kevin Glasgow a chance to shine, Sylwia’s soothing tones joining a few minutes in, becoming more forceful and emotional as the piece progresses. It’s a fascinating performance with piano central and drums beautifully restrained. Letter to A. is more avant-garde with unusual use of church organ before a more syncopated drum part emerges to underscore a soaring vocal. If the extraordinary ending with Sylwia’s multi-tracked voice supporting herself doesn’t give you chills, check your pulse.
This feature is also utilised in Reminiscence, which starts as a delicate tour de force for Sirkis, the arrival of piano moving it in an almost Latin jazz direction.

We are transported to a smokey jazz club for Chiaroscuro, Sylwia’s remarkably expressive voice wringing out every drop of emotion, and in a stark shift, the vocal gymnastics and drone of Rooting gives a more earthy quality that dynamically evolves with the introduction of piano, blending into the multi-section title track. The uplifting lightness of Message from the Blue Bird brings the lyrical piano of the recently and very sadly deceased Lyle Mays to mind for me, while Spooky Action at a Distance sounds enticingly like you think it should in a feast of percussive strangeness that resolves into beautiful melody.

As a whole the album considers the drastic changes currently being felt through the spread of technology, social networking and environmental threat, its theme is a wish to reconnect with the natural world, “a kind of a prayer in music for a better world for all of us”. The sense of danger comes through in the music but the whole is an uplifting and thought-provoking listen shot through with huge waves of positivity. There’s a purity to this album that underlines its quality, it’s beautifully put together and a simply fascinating experience.

At over 80 minutes, there’s a lot of music to get your head around but it holds the attention throughout, drawing you in to listen again and again. If I’d picked up on this album earlier it would have easily made top end of my list of the best albums from 2019. As accomplished as any self-respecting album could possibly hope to be, listen and be bewitched.