Earlier this year German progressive rock band RPWL toured Europe and the U.K. with their latest album, Tales from Outer Space, seemingly inspired by science fiction, although these tales shone a rather stark satirical light on earthbound issues. Towards the end of 2019, RPWL have swiftly followed it up with their latest live release, Live from Outer Space, filled with their characteristic classy and highly polished melodic rock. I witnessed RPWL’s impressive live show at the Winter’s End Festival in April, a virtually identical playlist to this release so it brings back happy memories of a fine gig.

The first half of this release demonstrates the confidence they have in the new material as they start the show with the whole of Tales from Outer Space in more or less a straightforward and faithful presentation, with the addition of an atmospheric and quasi-cinematic, ‘curtain raiser’ in News from Outer Space (not found on the studio album), featuring a monologue about aliens landing on Earth and deciding to leave very rapidly when they realise the nature of humanity on our planet! A couple of the tracks open up to an extent in a live context to showcase some of the band’s musical skills, most notably on the anthemic and U2-like Light of the World, a deceptively straightforward song which conceals an acerbic view on the materialism of modern society, reflecting Yogi Lang’s intelligent, biting lyrics, set within an ostensibly lighter sound.

This recording, from the legendary Culturpodium De Boerderij in Zoetemeer, Netherlands in April 2019, captures the power and smooth assurance of this talented and confident touring outfit. Kalle Wallner is a true star on stage, oozing cool charisma whilst rippling off expansive and sometimes Gilmour-esque guitar solos with great aplomb, particularly on the stratospheric finale to Light of the World. Similarly, the thumping, insistent Not Our Place To Be gives Markus Jehle an opportunity to stretch out on keyboards with an extended organ section which has clear echoes of Rick Wright on early Pink Floyd albums. Stand out song Give Birth to the Sun is a sparkling piece that allows the whole band a chance to shine, particularly Wallner and Jehle, interchanging and exchanging short solo bursts fluidly on guitar and keyboards. However, like the majority of Tales from Outer Space, even this sweeping ambitious piece is presented almost note-perfect to the original. Some will enjoy the precision and musicianship of a band that can so skilfully and accurately present their recorded material on stage, whilst others may feel that the attraction of live songs is the opportunity to present some unusual or even a slightly improvisational arrangements.

CD Two arguably features the more interesting section, for those already familiar with the studio albums, as it showcases songs mainly drawn from their earlier career, commencing with Hole in the Sky from their classic 2005 album World Through My Eyes, which includes some intriguing quotes from the movie Aliens, but also some majestic guitar soloing from Wallner in the closing stages. Sleep drives along powerfully and relentlessly, and the excitement levels for this gig definitely ramp up from this point. An impressive Floyd-like interpretation of Dylan’s anti-war Masters of War follows with a message that sadly seems as relevant as ever since Dylan wrote it in protest against the Vietnam War. This is an unexpected cover and it is when RPWL are less predictable that they gain more interest.

The Eastern-tinged and impactful Trying to Kiss the Sun, with Marc Turiaux thunderous on drums and Sebastian Harnack nailing it down on bass, was the very early career ‘curve ball’ song thrown in towards the end of the set, which ends with the sing-along Simple Minds-like chimes of Roses (sung on the original album by Ray Wilson of Genesis) which ends the set on an upbeat note and gives the audience the opportunity to give the cool frontman Yogi Lang a rose. 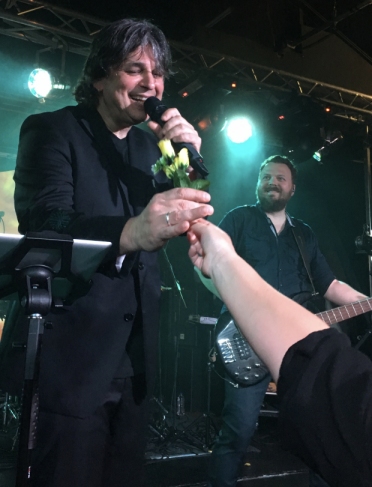 The encore Unchain the Earth is drawn from possibly RPWL’s best album, Beyond Man and Time which ends the gig on a satisfying note.

So, is it worth getting this live album?

It is an understandable business model which keeps the income stream flowing in these days when album income is sadly a small fraction of former days. Therefore, RPWL releasing another live album seems par for the course… however, perhaps it needs pointing out that for RPWL since 2015 this is their fifth album release, of which four have been live albums (!). Admittedly, two of those were Pink Floyd themed, but even so, one has to wonder whether RPWL are drawing from the well of ‘Live Albums’ just a little too often.

Additionally, 50% of this live album is a performance very closely resembling the original Tales from Outer Space, which was only released a few months previously. On top of all that five out of the six live tracks from the second half have featured on previous live albums, so it’s not exactly filled with a wealth of rarely played material or songs which have not appeared in live versions beforehand (with the exception of Masters of War).

Bearing all that in mind, one has to conclude that this is far from essential, and maybe RPWL need to consider their release strategy as such offerings are not really designed to gain a great deal of interest beyond the most ardent of fans. I think of myself as a keen follower of RPWL, but I could not escape the feeling that this has all largely been heard before, or has literally only just been released in almost identical form – so what’s the attraction for me or other fans to get this?

The sound quality and production is as impeccable as the band’s excellent and polished live performances. For those unfamiliar with much of RPWL or the latest album, this is very much worth getting as an introduction. It’s a fine memento of some high quality gigs for those fortunate enough to see them in action…

… but perhaps RPWL need to stretch the envelope a little more in terms of exploring their extensive back catalogue and maybe be a little more adventurous in how they interpret some of those songs for future live shows and subsequent live albums.

If you don’t really know the band then give it a go as a gateway – they are a class band and it’s an entertaining set… but if you know them well then you’ve literally heard nearly all of it before.