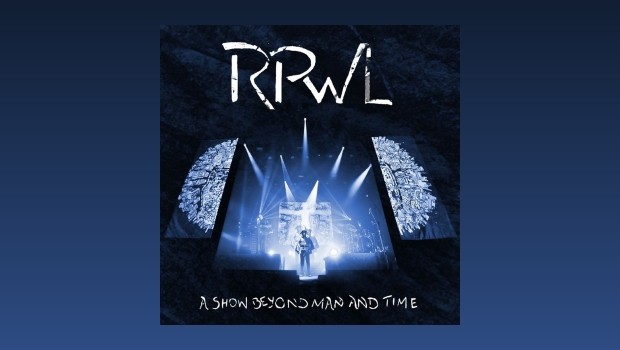 My first real introduction to the music of RPWL came this year with the release of the 2014 Wanted album (read why such a delay occurred HERE). So somewhat inspired by their latest studio release I backtracked to last year’s live recordings of the Beyond Man And Time album shows and in particular Metal Mind Productions’ A Show Beyond Man And Time. The concert recorded in February 2013 is available as double CD and also a single disc DVD. Both cover the same performance and additional material on the DVD is an interview with Yogi Lang and Kalle Wallner, commentary on the concert video, a photo gallery, desktop images and band discography.

Those familiar with Metal Mind Productions releases will be aware that the live performances are filmed and recorded in Katowice’s Wyspiański Theatre, an intimate and warm setting. Multi camera filming and a familiarity with the venue’s acoustics guarantees an excellent live audio sound as well as capturing the performance on film. I used the word intimate to describe the venue and this permeates throughout the DVD. The audience, (complete with one guy in his Summer’s End T Shirt), are attentive and more animated as the performance goes on. The only time the audience’s temperament was tested was when Kalle Wallner decided to anoint the first few rows with water.

Prior to this DVD I wasn’t familiar with the original album and therefore the music or the concept behind the music. What was immediately obvious however was that the band were not merely going to stand on stage and rely on their own performance, but that a strong visual element would be integral…

RPWL took the brave move to feature only material from Beyond Man And Time, (with the exception of the encore), for this performance. The evening opens with a long atmospheric passage, with recorded narrative by Ian Salmon and featuring projected images. The evening’s concert would be a multimedia extravaganza with both multi-screen front and rear projections as well as an impressive lighting show.

Following the introduction the stage is flooded with an atmospheric blue wash for the entirety We Are What We Are. The longer shots nicely capture the impressive stage setting and the projection screens, neatly intermingled with band close-ups. Yogi Lang performs one of his really great solos on the Moog (Voyager). As Lang steps aside for a minor costume change, the impressive Markus Jehle takes over – followed by a concise solo from Kalle Wallner. Backing this up is the solid rhythm section of Werner Taus on bass and Marc Turiaux on drums and percussion. Although visually in the shadows during most of the performance Marc Turiaux’s drumming impresses throughout the performance.

The title track is an absolute gem, both musically with Kalle Wallner providing some soaring guitar work and vocally with Lang and Wallner producing some fine vocal moments. Following the album concept Lang portrays the blind man. Lang will return as a scientist in Unchain The Earth…

As a concept album this is deep and on many levels. To this end Yogi Lang adopts a number of costume changes to represent the characters – the aforementioned blind man and the scientist, a hunchback (The Ugliest Man In The World) and a holy man. All are augmented by the screen images. Visually this is a stunning performance, although truth be known I’m not one for concept albums and as a consequence not overly keen on stage theatrics. This said, you can’t fail to be impressed by this stage show and perhaps although not on the grandiose scale of Pink Floyd, it is still an impressive piece of music theatre.

I’ve only recently purchased Beyond Man And Time so not fully conversant with the material. It does appear however that the band have followed fairly closely the arrangements from the studio album, with slight variations to allow time for costume changes and atmosphere. Notable exception seems to be on Somewhere In Between which is some seven minutes longer…

In my review of Wanted I commented on the band’s crafting of their pop/rock leanings and how these were integrated within a progressive framework. On Beyond Man And Time I get the impression this role was somewhat reversed. Regardless of this, RPWL manage to combine catchy song structures within an extended framework and proof of the pudding can be heard in the seventeen minute epic, The Fisherman. Full of atmosphere the song meanders gracefully until the middle instrumental section, but rather than cutting loose it just ratchets up a notch or two. Initially I was reminded of some of Saga’s early keyboard/guitar work followed by Hackett and Banks at their finest. Great sounds and fantastic playing from Markus Jehle, he really is an unsung hero. The whole performance has many memorable melody lines and here the harmony vocals could well have come from Messrs Anderson, Squire and Howe (circa Close To The Edge).

Having now listened to Beyond Man And Time and Wanted in some depth now, there is absolutely no doubt that these guys are not only good song-smiths and fine musicians, but this live registration proves that they can also pull it off outside of the studio.

Minor criticisms might be aimed at the silhouetted Bondesque dancing, which are perhaps a little overdone. Now this may tie in with the overall concept, but as I’ve only had the original album for a couple of days so I’m not fully au fait with it all yet. There also appears to be some ‘post performance’ visual editing, which is a little unnecessary. The interview section with Yogi and Kalle was a little clunky and really didn’t need the endless camera angle changes. But there again the DVD extras, as always for me, are a watch once only event. The Band’s Commentary is a showing of the DVD with anecdotal additions from Yogi and Kalle – only managed a little bit of this – sorry. The photo gallery, desktop images and band discography I passed on. BUT these are extras and therefore additional bonuses, so like ’em or not, they didn’t detract from what is an excellent DVD.

The last few weeks have been a crash course introduction to the music of RPWL and so far I’ve been mightily impressed. The fact that I’m backtracking and still only in 2012 bodes well. Still some fifteen more years to go until I reach the beginning. I’m sure there are many RPWL fans out there saying “we told you so” and have already purchased these releases and eagerly anticipating Wanted. But for those who’ve still not checked out RPWL then you might be missing out on something here! And this could be as good a place to start and certainly look out for Wanted in mid March 2014.