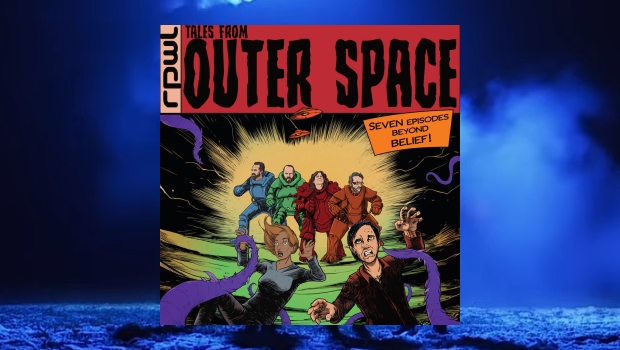 RPWL return with their first original studio album since 2014’s Wanted, with songs seemingly inspired by science fiction in Tales From Outer Space.  These are not corny tales of sci-fi pulp fiction but vehicles for the band to shine a light on all too earthly issues with their trademark highly polished melodic rock. RPWL initially commenced as a Pink Floyd tribute band, and that influence has unashamedly threaded through their albums since 2000 – indeed they have released whole albums devoted to interesting interpretations of Pink Floyd, often delving into the more obscure corners of the Floyd canon. Therefore, it comes as no surprise that the Floyd imprint is embedded in RPWL’s musical DNA on this album. Clear as those influences are, RPWL have evolved their own distinctive style at times, producing fine albums such as 2005’s World Through My Eyes and their masterpiece Beyond Man And Time in 2012.

A New World opens in suitably cosmic style with Tangerine Dream-like synths and Mellotron sounds setting the scene before the song bursts open with their characteristic grand swathes of rock from Kalle Wallner’s phalanxes of titanic guitar. This is stately, high quality rock, instantly recognisable as RPWL who inexorably glide in on a wave of power and control. Yogi Lang’s distinctive mellow vocal tells the story of aliens landing on Earth, meeting a human and learning just how much evil and suffering is caused by humanity, and deciding to leave immediately (probably a wise move!). Markus Jehle lays down an interesting serpentine synth solo before Wallner floats in an undulating Gilmour-esque guitar solo, and then the all-conquering leviathan of sound for the main part of the song rolls back in. It is a confident and striking opening song and tells us we are very much firmly and solidly back in RPWL territory.

Welcome To The Freak Show opens with the sounds of a circus crowd and a rumbling bass with crisp drums from Marc Turiaux (the only surviving band members that originally made up the first initials of  the ‘RPWL’ band name are Wallner and Lang). This song similarly rolls along powerfully until an eerie Grand Guignol-like section with piano, synth and Lang’s vulnerable vocals injecting some drama and variation, leading to a suitably freakish, distorted and angular Wallner guitar solo. It is when RPWL go a little more more ‘off piste’ that they create more interesting vignettes in their music.

Not Our Place To Be features bassist Guy Pratt, who used to play in latter day Pink Floyd’s live band, therefore it is perhaps ironic that this is the most unusual and ‘un-Pink Floyd’ song on the album, and it stands out accordingly. Starting with insistent string sounds, reminiscent of the film Psycho, Turiaux and Pratt on drums and bass then set a pounding rhythm underpinning another story of aliens, initially optimistic about what they see on Earth, but with a very satirical twist:

“A Planet that could offer more than you’ll ever need,
Now for a year we’ve watched their life,
A world of people full of lies and all their misplaced fears that makes them hate, makes them kill, living on the goodwill of a greedy few who pull the strings.
Engines on, this is not our place to be.”

A distinctly psychedelic and sinuous Hammond organ sounding solo slithers in over the pounding backdrop to add some spice to the conclusion of this fine song.

RPWL have always been ‘song oriented’, usually limiting more excessive instrumental flourishes and excesses, and Tales From Outer Space is very much anchored in grounded, straightforward melodic song structures. Light Of The World and What I Really Need are accessible rock songs, with the latter chiming in with U2-like shimmering guitars. However, the rather breezy feel of this song conceals an acerbic view on the materialism and consumerism of modern society, reflecting the cleverness of Lang’s lyrics, setting insightful and biting words within a deceptively lighter sounding song.

The atmospheric Give Birth To The Sun is the centrepiece of the album, commencing with sombre keys and a lovely vocal from Lang conveying the ‘Dark of the Dawn’ – indeed, this is a song about transitions between light and dark with alternating heavy and soft sections. The outstanding mid-section is notable for a fascinating exchange between weirdly tuned keyboards and undulating synth runs repeatedly interchanging with more powerful guitar-led sections over a backdrop of restrained drums and chiming guitars.

This musical ‘conversation’ may represent the relationship between ‘Darkness and the Sun’, and is one of the most imaginative and captivating pieces on Tales From Outer Space. This album ends in an understated manner with a simple piano intro for the coda song, Far Away From Home, in which Yogi Lang seemingly sings a lament for our planet:

“I can’t recall, but it hurt so much to see,
How you destroyed what you were meant to be.”

The band join in and Wallner throws in a trademark guitar solo, but one cannot help wondering whether a more simple setting for such a song may have been more in keeping with its rather sad feel… and that is the sort of reservation which detracts a little for me from this new release. Lines in the song Light Of The World may sum up that nagging feeling for this listener:

“Listen to that song you never heard before
yet the sound is so familiar, you once passed through that door.”

To be fair, this is a good quality album, but I cannot shake off the feeling that RPWL are giving us much of what they have already given us over the years. Beyond Man And Time, released back in 2012, was full of interesting and beguiling musical ideas, and was a significant progression from previous albums, but perhaps there is a sense of ‘treading water’ since that career highpoint. Prior to Tales From Outer Space there has been only one studio album and no less than three live albums (two of them based on Pink Floyd) released in the seven years since Beyond Man And Time. Maybe such an observation is a little unfair as Tales From Outer Space is definitely a decent album, and many bands would crave such musical excellence in performance. However, after such a long break since an original studio album my hope was for a little more adventure and progression.

Many RPWL fans will love this album – it’s classy and assured, and those unfamiliar with this band but who like accessible melodic rock with interesting lyrical themes will find much to enjoy in this finely written and executed release.

RPWL are masters of their characteristic trademark sound, sleek, luxurious ‘Limousines of Music’, totally reliable in the excellence of their performance and satisfying in their musically rich style…

… but maybe next time some of us may want a more exhilarating and less predictable ride from such a talented band?