This is as much a review of this fantastic little sticky-floored venue with its inexpensive bar, as it is the bands I saw. Apparently, Level 3 closed because another Swindon venue was getting all the acts but re-opened because of help from the very same other Swindon venue… or something. It was loud in there. Get off my back. 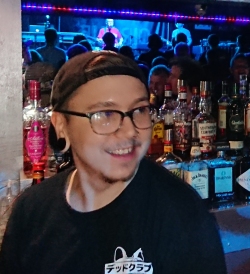 Once past the tremendously friendly security guy (whose name I didn’t get but who deserves a mention), down the steps and through the double doors, Level 3 has the feeling of an in-through-the-out-door cinema. Upstairs was another band, clearly audible from the toilets, running through Nirvana and Lenny Kravitz covers.

The stage is oddly high. There’s even a railing around it.

The room is flanked by two iron spiral staircases leading to a mezzanine doubling as the roof to the bar and artists’ area. I got chatting with one of the off-duty staff, Johnny. It turned out that he’d been in a band with Let’s Swim, Get Swimming’s drummer and was good friends with my niece’s partner. Their guitarist comes from my hometown. It’s a small World. Johnny was kind enough to have a chat with his boss and let me sneak up to the mezzanine/artist’s area to take some photos.

I would urge you to support Level 3 and go there as often as possible.

As for the bands, first up, the oddly named “power trio”, Let’s Swim, Get Swimming exploded into life before a diverse audience, with their intricate Math Rock. These youngsters know their craft. Their drummer, Thomas Shrimpton, is a powerhouse. His seemingly limitless energy and enthusiasm is the bedrock for the intricate riffing of bassist Andrew Stokoe and guitarist Paddy Towner. All three of these charismatic youngsters made the venue come alive. The younger audience danced vigorously to even the heaviest and most intricate parts, even when there were changes in tempo and time signatures mid-song. The kids of today, eh? I was so impressed (with the band) that I bought a tee-shirt – only the second such tee-shirt purchase since (ahem) the Yes Drama tour in the year of our Lord 1824. This is a band to watch out for. If you like Animals As Leaders then there’s a good chance you’ll enjoy Let’s Swim, Get Swimming. If you get a chance, then go and see them play. 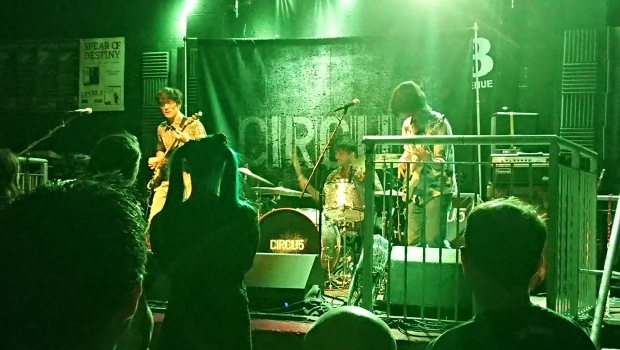 Next up: I Am The Manic Whale from Reading, just down the M4.

Ex-teacher and self-confessed nerd Michael Whiteman juggled the roles of front-man, lead vocalist and bassist. All band members contributed vocal harmonies throughout. To underline their innate nerdiness they proudly perform a song about Dr. Who and wear that number, loud and proud, like a great big proggy-nerdy badge.

With guitarist David Addis, drummer Ben Hartley and John Murphy on keyboards, I Am The Manic Whale delivered their set of polished, well-rehearsed, hook-based prog with professionalism and great musicianship. Replete with sweeping symphonic passages, complex vocal harmonies and almost Genesis/early After The Fire-like prog tropes, clearly their music pays tribute to their predecessors in the genre and will appeal to any lover of prog. So well-rehearsed are they that they don’t even need a playlist!

Sadly, no pictures of I Am The Manic Whale – so here’s some footage from their New Forms of Life ~ Live At The Oakwood release…

SET LIST
Valente Scream
The Milgram Experiment
Princess Strange
The Lifeboatmen
The Deplorable Word
Strandbeest
The Man With Many Faces
[The above playlist was revealed in conversation with the charming John Murphy. He dictated it to me whilst they were clearing the stage for CIRCU5!]

Headlining act CIRCU5 started their set much like the album starts, as very much a straight-up Rock act. As the set progressed, so do the songs.

2017’s eponymous concept album was given a fantastic live airing by Steve Tilling (who, let’s face it, is CIRCU5) as he fronted his faultless band, with seemingly effortless charm and resplendent in red and black vertical striped pantaloons and black, “Who’s Grady” tee-shirt.

Drummer, Lee Moulding (now where have I heard that family name before?) maintained the faultless record of all the drummers playing that night, providing punchy, drummy perfection. Guitarist, Matt Backer, who also played a part on the album, was the perfect guitarist and side-man and last, though by no means least, Mark Kilminster just bloody nailed it on bass.

As the set was approaching its finale, the band suddenly went off-piste with a Queens Of The Stone Age cover, No One Knows. That was rather good! And they threw in a Tin Spirits song (I wonder why, Mr Kilminster…) which was also rather lovely!

They came back on track and finished with one of the catchiest songs ever to grace a venue full of proglodytes, The Incredible Monstrous Grady. Steve Tilling knows how to put songs together and he knows how to perform them. So does his band.

In the TPA review of the CIRCU5 album Steve is quoted as saying: “I wanted to make an album that’s fun to listen to but has a good story for those who like to dig deeper.” Clearly, he has taken that philosophy and run with it, full-pelt, at his live performances because this gig was tremendous fun. Even though there is a bar in the relatively small venue, the audience bucked the sad trend of mid-gig bar-fly chatting as CIRCU5 held everyone in the room from note one to “thank you, goodnight!” – and everything in between. I can’t wait to see what Mr. Tilling/CIRCU5 comes up with next and I’ll definitely be looking for an opportunity to see them again live!

I’ll let you into a little secret. I had no intention of reviewing this gig. This was supposed to be a little post-summer escapism for me. That it was! But I had a brilliant evening that I feel obliged to tell everyone about out of gratitude! Plus, I’m fortunate enough to have an outlet for this at The Progressive Aspect, and they’d punish me if they found out. Please send help.

I discovered a new band, and everyone involved deserves praise. The headliners absolutely nailed it. It was a great venue with lovely staff. There were three bands whose members all displayed consummate professionalism with, crucially, a sense of fun.