Tony: The quality of this event has been phenomenal, irrespective of whether I have been taken with them or not, they have all delivered great performances. Another of those annoyingly youthful bands who deliver in spades. A tight performance and professionalism belying their youth. They are brilliant, and completely overwhelmed with the ovation and warmth their set has received. The young bands have been brilliant, the future holds promise.

We were treated to the whole of their current repertoire, and I am particularly taken with Arrow, in terms of performance and layering, the band owe much to Yes and Queen. An interesting combination that very much plays down the bands range and focus. I really look forward to seeing them again, and I think you should see them at the earliest juncture. They should, with a fair wind, be playing much bigger venues soon.

Leo: Every festival has it’s ‘surprise package’ and Emperor Norton were DEFINITELY Fusion Festivals ‘out of the blue’ artists mesmerising an audience with a remarkable set of confidently played ornate and engaging progressive rock. Marc Green on keyboards excelled alongside a wonderful guitarist Scott Neumann, driven along powerfully by the deft bass playing of James Kulmer and the precision drumming of Joe Rees-Jones. However, although the musicians were excellent, the band’s vocals were truly outstanding and helped lift this band on to a different level as Matthew Corry’s extraordinary and apparently operatically trained voice soared majestically around the venue – truly stunning. This young band confidently finished the whole of their great eponymous debut album with the epic Arrow and as one the whole venue rose to its feet instantly, according them the warmest and most universal standing ovation of the whole weekend, which clearly touched the young band not used to such a large crowd. Such was their popularity that their debut album on the Merch sold out very quickly. DEFINITELY a young progressive rock band to watch in future and worth searching out for live gigs. Great booking Mr Steve Gould!

[TPA were so impressed they met the band after the gig for a brief interview which will be published at a later date.]

Tony: Owing more musically to the metal part of the prog spectrum, and with a vocal performance which was both brilliant and disconcerting. There was nothing wrong with the band at all, only my inability to marry the Erasure like vocals to the metal accompaniment. This is my issue, and many of the audience really enjoyed Spiral Key’s set; just not for me though. 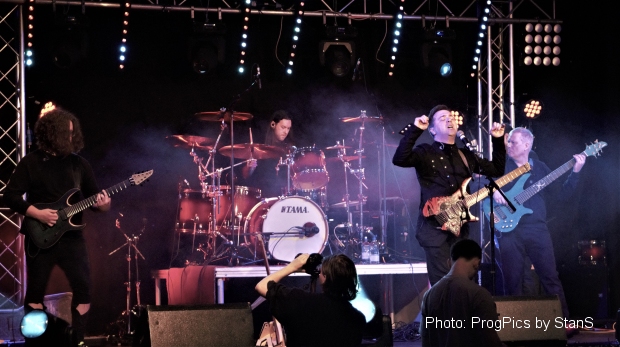 Leo: A much heavier slant on proceedings. A juggernaut of dark and dense rock with some excellent guitar and an impassioned singer… entertaining, but the vocals were somewhat overwhelmed by the tsunami of sound. Not my cuppa but they clearly had some talent in their field.

Tony: There are bands that attach themselves to your DNA without you being aware, This Winter Machine are such a band. I had seen them before at Summer’s End and was unmoved, more about me and my mind than anything to do with the band. They played a fantastic set and my heart and mind was won over. Throughout the set I noticed how much of the material from album one had settled in the earworm area of my brain. Al Winter sang from the heart, and the new material from the now released new album, A Tower of Clock, just drew me in more. A great set from a great bunch of musicians, more of the light aspects of prog, but some brilliant and memorable tunes.

Leo: An outstanding performance from this quality Progressive Rock band from Yorkshire. This was particularly impressive as they were very late replacements for the sadly unavailable Leafblade.

Their ability to meld catchy lyrics and hook-filled melodies shone on songs such as After Tomorrow Comes and the excellent Fractured from their debut album. However, it was the new songs from their second album A Tower of Clocks that really caught the ear, particularly the powerful but also sensitive Delta, about a young person’s doubts in ‘coming out’ to their parents. Symmetry and Light blended together The Police like hooks with slabs of full-on progressive rock and was a real highlight of the show, with particularly impressive keyboards. Anti-hunt song The Hunt was pure ’80s era Marillion (which is a good thing!), with its dual keyboard and guitar attack, and finale Carnivale was outstanding in its dramatic imagery and striking music.

[TPA exclusively reviewed A Tower of Clocks earlier this month, read it HERE.]

Tony: My apologies go to Steve Tilling’s Circu5, who I wanted to see but was overcome by the need of a seated meal with vegetables. Sorry Steve, I will catch up with you and your band sometime. The feedback was I missed a treat, though the pie and mash was lovely.

Leo: Sometimes you make a mistake at festivals. I knew nothing about Circu5 led by the outlandishly dressed Steve Tilling… so I put my mind in ‘neutral’ and buried my head in my phone. It was only much later on in the set when I realised I was virtually ignoring a remarkable show of unusual guitar oriented rock with feet planted both in indie rock and more progressive elements, complete with interesting lyrics and a fine performance… and then it was over – too late! Just to rub it in later on I was fortunate enough to win the Circu5 album at the festival, listened to it on the way home and was VERY impressed.

My apologies to the talented Steve Tilling and band – I won’t make that mistake again!

Tony: I could write reams about Franck and his entourage. Rock, prog, theatre, passion and artistry, the Franck Carducci Band will always wow an audience, and on this night the spectacular Mary Reynaud still gave her all despite being in constant pain from an injury.

Franck just about covers everything. Amazing, and the performance, saucy Theremin included, flew by. Forever on tour, they will be back in the U.K. at the end of July. Taking in their performance from various parts of the room, no one was left untouched, a constant swarm of predominantly males hovered front of stage, like bees around a honey pot. I did hover at the back a couple of times as the words ‘quite loud’ could be applied.

Leo: Franck Carducci and his band are consummate entertainers and their Fusion performance confirmed that they are simply one of the best live outfits out there, full of brio, humour and scintillating musicianship in what can only be described as a ‘Rock’n’ Roll Circus’. They just blew everyone away with a stellar performance.

Mary Reynauld literally lit up the stage in her ‘Angel’ costume and dazzled with sexual charisma in her tongue in cheek ‘Alice’ performance, including an unusual way to play the theremin!

Franck was ‘cool as f…’ in his rock Superstar persona and the new songs bode well for the next album, including one acapella song, On the Road to Nowhere, and the rocking Déjà vu Airport. The highlights were The Quind medley and the usual shenanigans in the spectacular Alice’s Eerie Dream. If you haven’t yet seen Franck Carducci then make sure you try to get to see them as soon as possible – simply one of the best rock shows around right now – great band and great fun – the Fusion crowd went potty for them!

Tony: Then we come to the last, IO Earth, two tracks from the Interweb do not do this band justice, genres blend, showing yet again that Prog is the genre without barriers. New singer, since 2017, Roseanna Le Fevre was captivating, both in voice and appearance. Loved the voice in rock and the quieter pieces. I bought the live album, but when the birthday comes around will request the latest from this band. They fit within their own box, though I personally felt some reference to Evanescence, only slight, and I think IO Earth have the edge. The touches of Eastern European amongst several others made for a fantastic end to a wonderfully executed weekend.

Leo: The late running of the event meant for this reviewer that he could not stick around much for the IOEARTH set which followed Franck Carducci. The one song I did see did suggest this was a skilled band with an impressive array of instrumentation and quality performers.

Quite how they would be able to follow the flamboyant theatrics and energy of Franck Carducci was going to be a challenge, which sadly I could not stay to witness.

Tony: High praise for Steve Gould and his team of volunteers, from the as slick as can be running, to the “do be quiet!” t-shirts, fast food, negotiated discounts and so much more. Pretty much a perfect weekend.

Leo: Steve Gould, also known as the ‘Progmeister’, bravely put together a three-day festival after an underwhelming showing for last year’s one-day event, and he was rewarded with a very successful event. Mike Morton of The Gift was very helpful in securing the presence of bands such as Focus, The Book of Genesis, his own band The Gift and the fascinating re-formation of cult band England, which propelled this event on to another level. There were healthy numbers in the crowd for all 3 days (although it was not sold out) despite competing with UK tours by major acts such as Riverside, The Pineapple Thief and Neal Morse. The crowds enjoyed the varied and talented roster of acts, and there was a relaxed and friendly atmosphere the whole weekend.
The venue itself is excellent in terms of seating and visibility of the acts on a high stage. The volunteers were all charming and helpful, and Steve Gould was a warm compere. The bar was well staffed, but perhaps a bit more real ale next year may be advisable for a ‘Prog Crowd’!

The venue itself is situated in a charming Worcestershire country town not far from the M5 in the middle of England making it fairly accessible to many areas in the country. Steve Gould took rather a gamble so family and friends, old and new, all mucked in to help make it a success… and when on the last evening Steve Gould was selling cut-price advance tickets for ‘FUSION 3’ next March 2020 there was very decent business to get hold of them, which indicates that this festival will grow in popularity as word of mouth spreads that this is a place and event definitely worth visiting. I will definitely be back next year – see you all there – it’s a cracker. 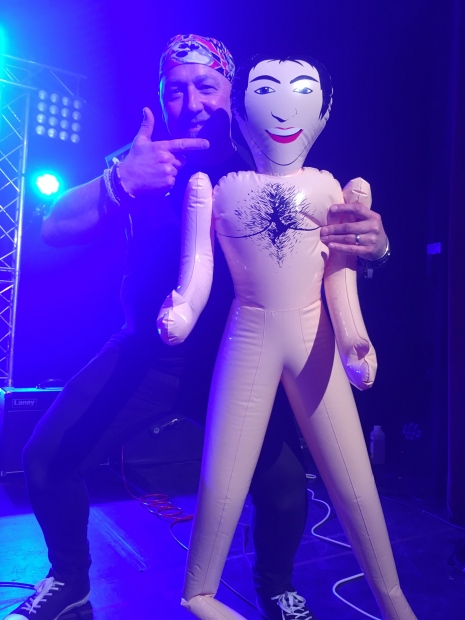