Two very good bands, one night, at Tavistock’s wonderful The Wharf. Great venue, frequently punching above it’s weight with attractions, and a few good places to eat near by.

First up for this double header was Zio; the brain child of Jimmy Pellagrosi (Ex Karnataka) and a set based upon a concept album that will be released in early December, it’s a story and the two central characters are played by Hayley Griffiths (ex Karnataka, now The Hayley Griffiths Band) & Joe Payne (The Enid, and now That Joe Payne).

Jimmy Pellagorsi is best described as a larger than life drummer, (most of them are), who plays at times like Animal from the Muppets, with a lot of Phil Collins like fills. He’s good, and the first three tracks played are drum orientated instrumentals; powerful, very loud, but controlled…

Talking of drummers at one point in the evening Joe demonstrates his skills on a £60 kids drum set and it’s a little scary how good he makes it sound. 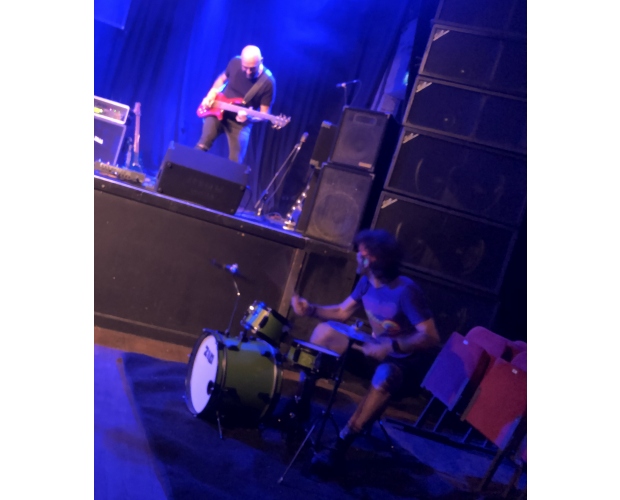 You cannot say the music is pedestrian, but Zio’s sound lifts a level once Hayley Griffiths and Joe Payne take the stage. Exciting, involving and I am now really looking forward to hearing this as an album.

Speaking to both Joe (That) and Hayley at the gig, the revealed that the artwork and story for this concept album are going to be amazing.

After a brief break in the bar, Karibow, bang, and they mean business. I like Karibow even though I am not too familiar with their repertoire, taking material from MOnuMENTO & the latest re-recorded album, their delivery is relentless. The pieces from MOnuMENTO I recognise gain a performance strengthening memory, and material new is equally as entertaining, whether rocking or acoustic.

Oliver is a very engaging front man and delivers exactly as you may expect. Some would hold back a performance when faced with crowd of a mere 50+, but Karibow, in what is pretty much a Progressive Rock tradition, give a show as if there were 2000. Oliver Rusing strides down from the stage shining with star quality amongst us, as rock chicks shake their booty in what is a very danceable set. When combining with Hayley some of the songs are just beautiful in execution and delivery.

If you were there, you got a treat, if you’ve seeing them further down the road, then great, but to give and get full value from either of these bands, have a night out & bring a friend or two. With the imminent changes there is no certainty of European acts being able to appear in the UK

SET LIST
The Raining Silence
E.G.O.
Is That You
District Of Dignity
Inside You
Here
The North Wall Tale
Red Feathers
Change
Remember
Inorganic Talk
The Cry