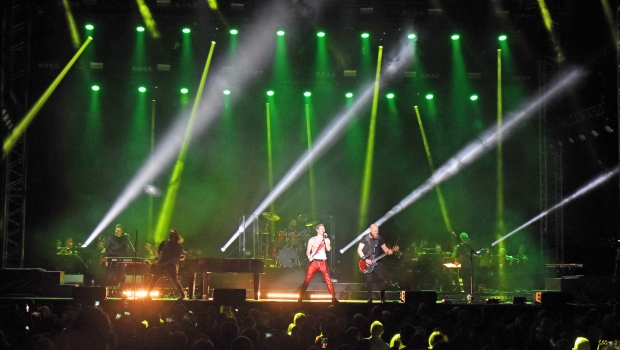 Scarborough’s 2019 Open Air Theatre season closed in spectacular style with a world premiere of the Queen Machine Symphonic with Kerry Ellis show which is due to tour the UK next spring. Making their UK debut Danish band Queen Machine, recognised as Europe’s finest Queen tribute band, were joined by the London Symphonic Rock Orchestra, conducted by Matthew Freeman, and by West End star Kerry Ellis.

The show was a fitting finale to another great season which has featured some great names including Madness, Jess Glynne, Kylie Minogue, Sir Cliff Richard together with two visits by man-of-the-moment Lewis Capaldi.

Queen Machine frontman Bjarke Baisner skipped onto the stage as the band and orchestra launched into One Vision, the first of around two-hours worth of classic Queen anthems. This was followed by Tie Your Mother Down and a medley of Seven Seas of Rye, Killer Queen, You’re My Best Friend and We Will Rock You.

“You have no idea how long we’ve been looking forward to this, playing in the land of Queen!” Bjarke exclaimed. The band, with lead guitarist Peter Møller Jeppesen, Jens Lunde (bass), Henrik Østergaard (keyboards, guitar) and drummer Paolo Romano Torquati, formed in Denmark in 2008 and regularly play sell out shows across the continent.

Joining them for this show and for next year’s tour, Kerry Ellis premiered the role of Meat in the 2002 production of We Will Rock You in the West End and has subsequently worked and recorded with Brian May. Her first solo number was Don’t Stop Me Now before she was joined on stage by Bjarke for a duet of These Are The Days of Our Lives.

The pace never let’s up as Kerry leaves Bjarke on stage for Crazy Little Thing Called Love. Bjarke’s performance has been honed, over the years, with all the authentic little Freddie Mercury mannerisms to match an uncanny vocal delivery. The other band members do not try to replicate the other members of Queen, they are just fine musicians, brilliant at, and loving, the job they do.

The addition of Matthew Freeman and the 15-strong London Symphonic Rock Orchestra adds an extra-special dimension to the performance, luscious string arrangements and a rich and powerful foundation. With a stunning light show, this is a must-see event on the forthcoming 2020 tour.

The second half opens with the classic anthem Radio Ga Ga and the heavy-rock Hammer To Fall before Kerry returns for a change of pace, seated beside guitarist Peter and a delicate rendition of Love Of My Life. “The last time I sang this,” she reflects, I was down on the seafront, here, at the theatre with our dear friend Brian May.” Bjarke again joins Kerry for another emotional duet, Who Wants To Live Forever and the upbeat Under Pressure.

Time for a spot of Freddy-esque vocal gymnastics with audience participation. Bjarke holds an impossibly long note and the audience respond admirably. “I’m speechless!” he laughs.

Inevitably we arrive at the ‘last’ song, “And it’s a good one,” says Bjarke as he sits at the piano for the unmistakable opening to Bohemian Rhapsody for which he simply plays along as the audience provide the vocals for the opening verse. It is clearly a moving moment for the Dane on his UK debut.

Joined again on stage for the encore by Kerry Ellis, two final anthems of Somebody to Love and We Are the Champions bring to a close this quite magnificent show.

SET LIST (all lead vocals by Bjarke Baisner unless indicated otherwise)
One Vision
Tie Your Mother Down
Seven Seas of Rye/Killer Queen/You’re My Best Friend/We Will Rock You
Don’t Stop Me Now (Kerry Ellis)
These Are The Days of Our Lives (Bjarke and Kerry)
Crazy Little Thing Called Love
I Want it All
The Show Must Go On
No One But You (Kerry)
Save Me (Bjarke and Kerry)
~ Interval
Radio Ga Ga
Hammer to Fall
Fat Bottomed Girls
Another One Bites the Dust
Love of My Life (Kerry with Peter Møller Jeppesen, guitar)
Who Wants to Live Forever (Bjarke and Kerry)
Under Pressure (Bjarke and Kerry)
It’s a Kind of Magic
I Want to Break Free
Bohemian Rhapsody
~ Encore
Somebody to Love (Bjarke and Kerry)
We Are the Champions (Bjarke and Kerry) 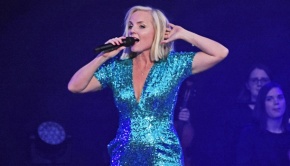