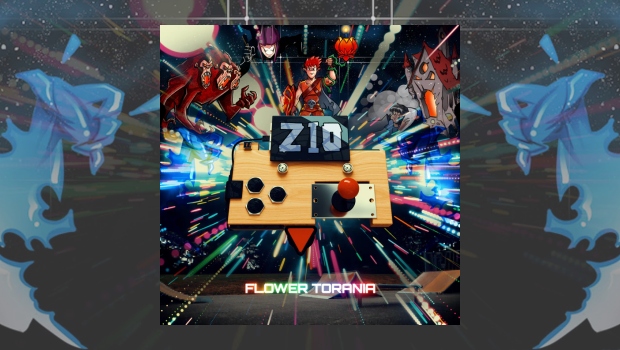 As the founder, Zio is the project of Karnataka drummer Jimmy Pallagrossi, and I have to admit this made me wary. Karnataka, along with other similar bands playing a mellow prog tinged with Celtic folk, plodded along for years at a steady pace – releasing pleasant album after pleasant album. And for me, I guess that was the sticking point. They were just too… pleasant. The one Karnataka album that resonated with me was their final one, Secrets of Angels from 2015. This album still had the trademark Karnataka sounds, but along with the atmosphere there was energy. Real energy. The music was more colourful, more vibrant and vivid, than any other Karnataka album for me, holding my interest throughout the album in a way Karnataka never had before. Now, knowing the story behind Zio, I figured that Flower Toriana ought to have the same sort of energy, colour and vibrancy – but in the back of my mind, I worried that I may find this album less than impressive.

I really shouldn’t have worried! Even the relatively brief introductory track, Ride Along, is full of life. Although it starts in a relatively calm fashion, it builds nicely, coalescing into a lovely concoction of glitchy electronic noises that definitely bring to mind the appropriate video game imagery for the album’s concept. Jimmy wrote this album, inspired by his love of video games and sci-fi, and this comes through time after time, sometimes more overtly than others. Ride Along leads straight into X Ray, which leaves the listener in no doubt that this album has energy with its powerful and aggressive opening passage. It also provides a great example of one of the strengths of this album: the superb harmonies of the vocalists, their lines intertwining and wrapping around each other. About halfway through, the music changes almost completely, and it’s pure prog metal. And wow, it’s good. Hayley Griffiths sounds stronger than I can ever remember, with perhaps my favourite vocal moments from her on the album. Joe Payne sounds good, but his time to really shine is yet to come.

The abrupt ending of X Ray, and the way it changed mid-song, meant I didn’t initially realise that Wings Inside was a new song. It’s not until about 40 seconds in that it sounds sufficiently different that I checked what I was listening to. And while that might sound like a negative, it really is not. The album flows incredibly well, and the way one track segues into the next only helps to maintain the story and illusion that the protagonist is racing against time to get through the different worlds of a video game.

Although the pace is far less intense in Gold and Power, this is one of my favourite tracks. There is still an insistent beat, and an overall sound which is far more electronic, and almost darkwave. This is a shorter track, and before you know it, Straight Up From Underneath has begun. This starts with a full-on melodic prog opening which is a little too cheesy for me (sorry!), before being stripped back to a much more attractive proposition. Indeed, this is the first of many changes of mood and tempo throughout the song. And it has my favourite vocal performance of Joe Payne within it, too. And there’s an insanely cool guitar solo towards the end. From a beginning that could almost have had me hitting the skip button, this is actually one of the most impressive and diverse tracks on the album.

Jupiter is back to the prog metal sound, but a lot darker sounding than in X Ray. Like that track, the rhythm section provides a massive sound, even in the quieter and calmer moments. And like that track, the coming together of male and female vocals provides a quite glorious sound. It’s not one of my favourite songs, but it is one where I find the chorus melody provides quite the earworm, coming back to mind hours or days after I’ve last heard it.

Erwin’s Opera is a song of two halves, the first being the most song-like on the album, before changing to a more instrumentally focused piece that zigzags between the metal and darkwave synth sounds of previous tracks, building to a climax that explodes, leaving a short, quiet coda. It’s an alright song, but I far prefer the following Inner City: Sharroma which harks back to the electronic and darkwave sounds of Gold and Power. While the vocals are strong and positive sounding, the music behind sounds menacing and threatening. There’s loads of atmosphere in this song, and I love the subtle keyboard flourishes, which have an almost avant feel, akin to Mike Garson’s work with David Bowie. There’s also some massive keyboard work on this track which is anything but subtle, and that’s just as enjoyable! Olivier Castan, on keys, is also one of the co-writers, and I believe also designed the artwork. His keyboard playing paints just as expressive a picture!

Ma Petite Histoire is the shortest track on the album, but it’s the perfect length for what it is. It’s very pretty, but knows not to outstay its welcome. Insterstellar List is effectively the final song, in the same way X Ray was effectively the first, as the title track works as an outro in the same way Ride Along introduced the album. For me, it’s similar to Straight Up From Underneath in having parts which are not entirely to my taste, but saved by the many changes within the song, and the stronger passages being so enjoyable and engaging, that those which I don’t like so much are readily forgotten. This has to be the most upbeat song here, and it’s a triumphant end to a very original album. Ok, it’s not the end. As stated, the title track ends the album, and actually I don’t mean to dismiss it, because I really like it – but it really is just a blissful comedown after the fireworks of Interstellar List.

As an album, Flower Toriana is incredibly original, mixing different styles with ease and panache. Since I’ve started writing reviews for this site, they have been overwhelmingly positive. It has been suggested more than once that I should try reviewing something outside my comfort zone. Flower Toriana was that album. It is an album I wasn’t sure I was going to enjoy it all. It is definitely not one I expected to enjoy this much. I will offer only one caveat. The Astonishing is my favourite Dream Theater album…