“A man who pleaded guilty, who offered no defence
Who claimed his own conception was a capital offence.”

For a man as in tune with the vast lexicon of the English language as New York maverick musician, songwriter, writer, and cartoonist Peter Blegvad, playing a gig in the spacious atrium of a modern library seems only natural. The lyrics are certainly the brightest star in the firmament of this unlikely but effortlessly elegant quintet, but the other musicians contribute fulsomely to a timeless Americana influenced sound that has weaved its way through The Band and Gene Clark, over the pond into the pubs of Brinsley Schwarz, and down under to through Bad Seeds dark underbelly, and back home to find an odd bedfellow in Beck of all people. And many, many more, obviously, both old and new. This sound is all-pervading, and therefore ageless. 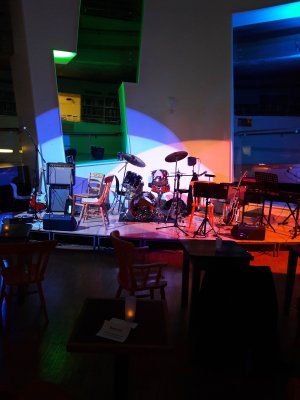 The quintet from stage left to right as we look comprise free-spirited American producer and singer-songwriter Bob Drake, replete with trademark psychedelic attire and lysergic fox’s tail; bassist John Greaves who as I’m sure you know has a long career dealing out assertive lower frequencies to the left-field fringes; drummer Chris Cutler, last spotted by your intrepid reporter steering the sometimes unwieldy ship that was the Lindsay Cooper Memorial tribute band at the Barbican; Mr Blegvad himself; and lastly but not leastly, Karen Mantler on organ, harmonica and glockenspiel, adding many splashes of aural colour.

The gig was a warm-up for the troupe’s appearance the following night at Café Oto, one of the hippest music venues in the capital, where no doubt they will be lauded by the great and the good. I bet there’s a review in the Grauniad. The band, gathered together from disparate parts of the Western world for this short tour that we are indeed grateful to witness, as it seems to make no economic sense, treat this performance in front of a seated audience of a hundred or so with the professionalism that a combined 200+ years treading the boards has ingrained into their collective spirit.

The intimacy of the setting was always going to be a major plus point at a gig like this, highlighted by such moments as Peter stopping the ragtime Too Much a couple of times after a few bars because “I’m an old man, I can’t play that fast”. Playing most of the last album Go Figure, which was released in 2017, Peter mentioned that he didn’t want the band getting too familiar, the previous album of new material Hangman’s Hill having come out a mere 19 years beforehand! 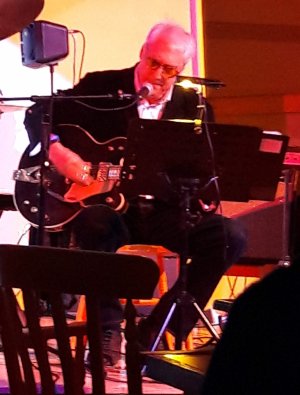 About halfway into the second set, Karen Mantler got to perform her own so far unrecorded and wryly amusing ditty My Boyfriend, eliciting many smiles and polite laughter from the audience in the process, and as such had the honour of performing the only non-Peter Blegvad Quartet/Quintet song of the evening, which is presumably why it doesn’t appear on the setlist below.

The stumbling stop-start blues of Million Things, led by Chris Cutler’s drum figure falling down the stairs in slow motion is a delight, and the tongue-twisting lyrics to the beguilingly odd Sven win the wordplay of the evening award, and probably only Peter could use a quote from John Cage as the basis for a strange tale about (probably not) teaching the Rolling Stones how to play the blues!

The disturbingly ordinary Mind The Gap, musing on disparate souls split asunder before they even met as the result of a terrorist incident on the Tube, almost went by unnoticed. Such is the nature of Peter’s highly observational lyrics that the awful, the humdrum, along with the humorous, the lovestruck and the quirky all come in for equal and whimsical attention. If you’re not paying attention, you’ll miss something!

A fine and engaging evening’s entertainment, let’s hope it’s not 19 years before the next album!