How’s that for a tasty line-up? A rare visit to these shores for one of America’s classic ’70s bands with support from British rock-royalty, it doesn’t get much better than this! Just a brief visit though, for Steely Dan – Birmingham is the third of four U.K. dates, plus one in Dublin.

“It’s great to be back in the land of my birth,” Birmingham-born Steve Winwood announces as he takes to the stage. “We are here to play some vintage music.” Vintage it was, kicking off with I’m A Man, from his days as the young teenage star of the Spencer Davis Group, and Them Changes, a Buddy Miles track that has become a live staple for Winwood, seated behind his vintage Hammond organ.

Stepping out to pick up his Stratocaster, Winwood is in fine form for two tracks from the Blind Faith album, Can’t Find My Way Home and Had To Cry Today. With great support from his small but select band, including Paul Booth blowing some tasty sax, most of Winwood’s set covers his early years with the token Higher Love being the only reference to a long and distinguished solo career.

A couple of songs from the Traffic catalogue, Low Spark Of High Heeled Boys and Dear Mr. Fantasy are included before he rounds off the near-hour long set with the Spencer Davis hit Gimme Some Lovin’ from over 50 years ago. It seems incredible, when you consider the age of many of his peers that Winwood is still just 70 years old and what an astonishing talent he was, and still is. 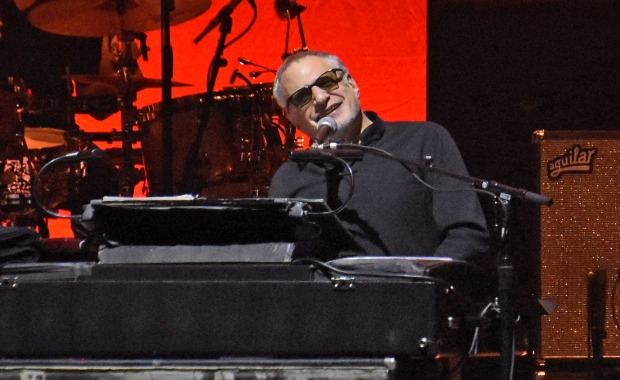 Donald Fagen is the sole remaining member of Steely Dan, his song-writing partner Walter Becker having passed away in 2017. The current touring band is a slick line-up of leading jazz/rock session musicians and they opened the Dan set with Ray Bryant’s instrumental Cubano Chant before Fagen arrived on stage and launched into a stunning version of Bodhisattva from (my favourite Dan album) Countdown To Ecstasy.

There followed a tour through, not so much of a greatest hits, more of a greatest album tracks set, Hey Nineteen, Black Cow, Green Earrings, reeling in the years from the classic Dan period of ‘72 to ‘80, with the backbone of the set centred around their critically acclaimed 1977 album Aja. There was also a notably jazzier edge to the older, originally rockier tracks but, of course, it was all delivered with supreme style and lapped up by the faithful who have waited so long for this moment.

Sadly, there was no mention of the late Walter Becker, although “I have a surprise for you,” Fagen announced midway through the set. There was a short delay, during which Fagen recalled that Steve Winwood had been one of the idols of his youth, while the technicians were busy setting up Winwood’s Hammond organ. Winwood then returned to the stage to take lead vocals and keys for a great version of Pretzel Logic, after which the two great men warmly embraced, a magic moment.

Dan’s set continued with the Dan-ettes, a female trio of LaTanya Hall and Caroline and Jamie Leonhart, taking the lead vocals on Dirty Work. Through the set the various members of the band also had their moment to shine: Jim Beard (keyboards), Mike Leonhart (trumpet), Jim Pugh (trombone), Walt Weiskopf (tenor sax) and Roger Rosenberg (baritone sax). A special mention, too, for Jon Herington and his immaculate guitar work throughout the night while Freddie Washington’s understated bass anchored the whole performance.

Peg and Josie, both from Aja, continued the set leading to the final number from the main set My Old School, by which time the whole arena was on their feet.

“This is the point where we usually leave,” Fagen said, possibly referring to the earlier delay. “You clap and we come back. Aw, let’s just get on with it!”

Cue Jon Herington and the distinctive opening notes to Reelin’ In The Years with the party in full swing. To finish, drummer Keith Carlock also had his moment in the spotlight with an explosive solo, Fagen stepping from behind his keyboard to take a closer look.

As the band slipped seamlessly into the closing instrumental, Joe Williams’ A Man Ain’t Supposed To Cry, Fagen and the girls slipped quietly away, no doubt to reflect on a tremendous night for Fagen, the band and the fans.