As we approach the Centenary of the end of the appalling carnage of the First World War it seems entirely fitting that Twelfth Night are marking the event with the release of a special studio album recording of their epic Sequences, based on the experiences of a young soldier in that far from ‘Great War’. Sequences was always one of the most powerful and evocative pieces recorded by Twelfth Night ‘back in the day’, and was very often the climax to their impressive live shows. However, somewhat strangely, it was never released as a studio version. There is a scintillating live version from 1983 on Live and Let Live with legendary vocalist Geoff Mann in his farewell performance, but sadly the band never recorded a definitive studio version with the lyricist of the pieces poignant words. Mann’s replacement, Andy Sears, performed it in subsequent years in his own inimitable style. More latterly multi-instrumentalist Mark Spencer donned the soldier’s uniform and picked up the vocal baton in fine style in 2012, and for their last ever show (so far?) in 2014.

Following work on the outstanding Definitive Edition re-release of Fact and Fiction earlier this year and further work on the mixes for the forthcoming live album A Night to Remember from their 2012 show at the Barbican in London, the idea developed that with the centenary of the end of the First World War imminent, 2018 would be a fitting time for the band to finally record a whole new vocal version with Spencer.

The main question is: Should they have just left Sequences alone? Are some things better left alone?

The answer in my view is categorically and absolutely ‘NO’.

This new version is NOT simply some cynical, tired old re-boot or a bit of a ‘polish up’ of an old album. This is a new version brimming with integrity, musical energy and excellent performances. It should also be remembered that the only version widely available is the live version from 1983’s Live and Let Live, which whilst clearly a classic performance of a great live band on top form is also limited by the production, sonic clarity, range of instrumentation and technology available for a live performance and recording from that time. Twelfth Night have taken the original blueprint of Sequences and created an updated and re-imagined version with additional parts, instruments and orchestration that fully demonstrates the high quality and powerful message of this classic song.

For those familiar with the band and this song, do not be alarmed! The band have not ‘messed about with it’ to the extent that it is unrecognisable or ruined. There is very clearly a fundamental respect for the essence and spirit of the original vocal version. However, they have presented the piece with added imagination and musical features which emphasise the story even more dramatically and poignantly. To put it in visual terms, if one thinks of the 1983 version as the rather jerky but authentic grainy black and white newsreel footage portrayal of this story, the 2018 version feels like a full widescreen cinematic colour version with Dolby sound! For those unfamiliar with this band or the original version this is a startling full-on introduction to a stunning piece of musical and lyrical drama. I actually envy new listeners to this piece.

Sequences commences in a bleak windswept musical landscape with an atmospheric ‘overture’ over which a mournful trumpet plays in Last Post style with gentle piano. This is a suitably elegiac introduction to this tragic tale as the piece segues into the distinctive, familiar chiming guitar intro, accompanied with cinematic orchestration. Spencer’s assured vocals do full justice to Mann’s emotive words, portraying the story of a young man going off to fight for his country but returning home transformed by his traumatic experience. The piece takes off as Twelfth Night cleverly and touchingly include a ‘cameo’ from now sadly deceased Geoff Mann, seamlessly editing in his inimitable vocal section from 1983 to voice the character of the ‘Sergeant Major’ in his speech to the recruits:

“If none of us went out to fight, we’d never prove our side was right, Would we?”

This is accompanied by Andy Revell’s evocative bubbling, fizzing guitar with additional stabbing, insane, insistent keyboards to underline the utter insanity of the war, with Revell even adding some vocals with plummy tones for the Colonel’s ‘Pep Talk’:

“Though the numbers of dead will contain many zeroes, The survivors will return to a land fit for heroes. Would I lie to you?”

Mark Spencer shows impressive vocal dexterity in portraying the different facets of the story, including the desperate tones of a fearful young infantryman anticipating the attack in the morning. Andy Revell’s guitars skilfully illustrate the musical images, ranging from plaintive electric guitar notes to delicately picked classical passages, backed with a cello sound in the ‘pre-dawn’ sequence. The tension before the final attack builds and builds in an extended section, enhanced with Anastasia Koburg’s backing vocals. Then the fateful whistle sounds and “Over the Top we Go!” signals the start of a stunning electric guitar solo from Revell, squeezing all sorts of distorted, twisted sounds from his fretboard. Brian Devoil pounds away with artillery like drumming and Andy Faulkner’s thundering bass underpins this mayhem. The sheer hell of a First World War battlefield brilliantly portrayed in music with outstanding composition and performances. Twelfth Night are in apocalyptic form with Spencer screaming “It’s madness, madness…” as the drums explode all around him and Revell’s coruscating guitars strafe maniacally across the battleground – breathtaking stuff. This sections ends in feedback and the sound of rain before a sorrowful guitar and orchestrated melancholic cello takes us to the “station platform full of stretchered flesh and bone…”. 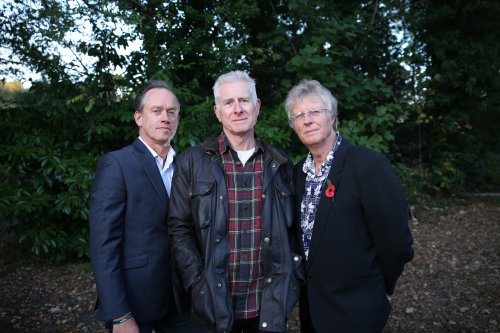 Spencer’s voice emotively conveys the desolation of the young man, devastated by the carnage and destruction he has survived, realising the futility of war. This section swells with keyboards, choral backing and then takes flight with a soaring Revell guitar. A more restrained interlude slowly builds towards a more hopeful conclusion with the ‘TN Peace Choir’, featuring such artists as Tim Bowness, Alan Reed, Simon Godfrey, Stuart Nicholson and Lee Abraham, amongst others, backing Spencer’s impassioned singing of Mann’s fine words, “We Must Believe, We Must Believe… In Love”, the band powerfully playing out a triumphant and dramatic ending. Truly outstanding.

The second track is the instrumental version, which is worth getting the album for alone, and also points to the rather curious origins of the original track. Sequences began as an instrumental piece for Twelfth Night before the band had a vocalist as far back as about 1978, as can be heard on the 1981 album Live at the Target. Back then Clive Mitten was crucial in the composition of the original music and with his distinctive bass playing, but these days he has moved on to his impressive C:Live Collective Project. In the period 1978 to 1980, Sequences grew into a fully developed and extended progressive rock instrumental that became popular with audiences. Geoff Mann, a friend of the band at the time, wrote the lyrics over the instrumental piece and sang it over the live recording as a way to audition vocalists in 1981… until the band eventually realised that their singer could only be the man who had written and sung those poignant words for the ‘audition demo’, so Geoff joined the band. The interesting sleeve notes give some fascinating insights to the story behind the personal inspiration for Mann’s lyrics… but you’ll have to get the album to read this story and see the wonderful sleeve art design and archive photography put together by Paul Tippett. It’s a beautiful and fascinating package.

Shorn of the words, the instrumental version is a revelation and fully reveals the cinematic sweep of the music, allowing more focus on the varied instrumentation and allowing attention to the finer musical details. Mark Spencer and his bandmates have excelled themselves, superbly presenting the music with sensitive orchestration and impeccable, crystal clear sound production. The final piece, Interpretations, takes us into rather more contemplative territory as Dean Baker, usually of Galahad, sensitively takes some of the themes from Sequences and interprets them with touch and emotion on piano and keyboards. This song and album appropriately fades gently until we hear the sound of a train moving away, presumably filled with the ‘stretchered flesh and bone’ of the casualties.

Twelfth Night were one of the leading exponents and veterans of the new wave of Progressive Rock of the early 1980s, alongside such bands as Marillion, IQ and Pendragon. They have done the real veterans and fallen of the First World War proud with this spectacularly well executed re-imagining of their anti-war epic. What has been crucial is that the band have maintained and reinvigorated the artistic heart of the original piece as well as totally respecting the integrity and impact of the message.

It is typical of the band’s spirit and generosity that they are contributing a significant portion of the money paid for each album sold to the ‘Poppy Appeal’, with the option to add an extra donation to that cause when purchasing the album. (At the time of writing this appeal had already raised more than £1,000 through pre-orders).

The sad thing is that nearly 40 years since this music first originated and 100 years on from the end of that awful conflict it seems that with war and strife still common around the world it is tragically clear that Sequences is as relevant now as it ever was and we are still to learn those bitter lessons of history – some things never change.

Strange as it may sound, with their first full studio album since 1986 Twelfth Night have probably created one of THE Progressive Rock albums of 2018 – some things are just timeless.

[Sequences will be exclusively premiered along with an interview with the band on Progzilla Radio on the Sunday November 11th at 11:02am U.K. time, after the 2 minute silence. The album is available to buy from www.twelfthnight.info.]